Maria Komnene or Comnena (Greek: Μαρία Κομνηνή, Maria Komnēnē), (c. 1154 – 1208/1217), was the second wife of King Amalric I of Jerusalem and mother of Queen Isabella of Jerusalem.

She was the daughter of John Doukas Komnenos, sometime Byzantine dux in Cyprus, and Maria Taronitissa, a descendant of the ancient Armenian kings. Her sister Theodora married Prince Bohemund III of Antioch, and her brother Alexios was briefly, in 1185, a pretender to the throne of the Byzantine Empire. 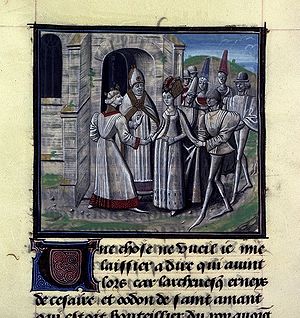 Marriage of Maria and Amalric.

After the annulment of his first marriage to Agnes of Courtenay, Amalric was anxious to forge an alliance with Byzantium and asked the emperor Manuel I Komnenos for a bride from the imperial family. Maria was the emperor's grandniece and he bestowed upon her a rich dowry.

The marriage of Amalric and Maria was celebrated with much fanfare at Tyre, on 29 August 1167. They had a daughter, Isabella, in 1172, and a stillborn child in 1173.

On his deathbed, in 1174, Amalric left Nablus to Maria, who became Dowager Queen upon his death.

In 1177, Maria married secondly with Balian of Ibelin, who commanded the defense of Jerusalem against Saladin in 1187. She bore him at least four children:

Maria and Balian supported Conrad of Montferrat (uncle of the late King Baldwin V) in his struggle for the crown against Guy of Lusignan. They arranged for Maria's daughter by Amalric, Isabella, to have her first marriage annulled so that she could marry Conrad, giving him a stronger claim to the throne. In this, Maria and Balian gained the enmity of Richard I of England and his chroniclers. The anonymous author of the Itinerarium Peregrinorum et Gesta Regis Ricardi wrote of them:

Steeped in Greek filth from the cradle, she had a husband whose morals matched her own: he was cruel, she was godless; he was fickle, she was pliable; he was faithless, she was fraudulent.

As the grandmother of Alice of Champagne (Isabella's daughter by her third husband, Henry II of Champagne), Maria conducted the marriage negotiations with Cyprus in 1208 – Alice was to marry Hugh I of Cyprus. Blanche of Navarre, Regent and Countess of Champagne, widow of Alice's paternal uncle, provided the dowry for Alice. This is the last time Maria is mentioned, and she was certainly dead by 1217.