From Infogalactic: the planetary knowledge core
Jump to: navigation, search
"Maria II" redirects here. For other uses, see Queen Mary II.
For other people of the same name, see Maria of Portugal. 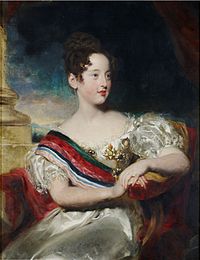 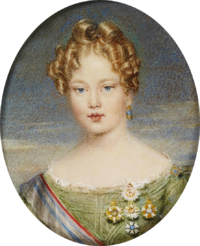 Born Maria da Glória Joana Carlota Leopoldina da Cruz Francisca Xavier de Paula Isidora Micaela Gabriela Rafaela Gonzaga,[1] in Rio de Janeiro, she was the daughter of the future King of Portugal and first Emperor of Brazil, Pedro IV and I and his first wife Maria Leopoldina, Archduchess of Austria, herself a daughter of Emperor Francis II. Born in Rio de Janeiro, Brazil, Maria is the only European monarch to have been born outside Europe, though she was still born in Portuguese territory.

When Maria's grandfather King João VI died in March 1826, there was a succession crisis in Portugal. The king had a male heir, Pedro, but Pedro had proclaimed the independence of Brazil in 1822 and he was then Emperor Pedro I of that country. The late king also had a younger son, Miguel, but he was exiled in Austria after leading a number of revolutions against his father and his liberal regime.

Before his death, the king had nominated his favourite daughter, Isabel Maria, to serve as regent until "the legitimate heir returned to the Kingdom" — but he had failed to specify which of his sons was the legitimate heir: Peter, the liberal Emperor of Brazil, or Miguel, the absolutist exiled prince.

Most people considered Peter to be the legitimate heir, but Brazil did not want him to unite Portugal and Brazil's thrones again. The European country had been under Brazilian rule when both were part of the United Kingdom of Portugal, Brazil and the Algarves, established by King João VI during his stay in Rio de Janeiro from 1808 until 1820. Aware that his brother's supporters were ready to bring Miguel back and put him on the throne, Peter decided for a more consensual option; he abdicated the throne to his eldest daughter, Maria da Glória (who was only seven years old), and she should marry her uncle Miguel, who should accept the liberal constitution and act as a regent until his niece was an adult.

Miguel pretended to accept, but when he arrived in Portugal he deposed Maria and proclaimed himself King, abrogating the liberal constitution in the process. During his reign of terror, Maria traveled to many European courts, including her grandfather's in Vienna, as well as London and Paris.

Pedro abdicated the Brazilian throne in 1831 in favor of his son (and Maria's younger brother, Pedro II), and joined the forces loyal to Maria in the Azores in their war against Miguel, forcing him to abdicate in 1834. Maria was thereupon restored to the throne, and obtained an annulment of her betrothal.

On 7 February 1833, in order to protect the Queen, the 2nd Lancers Regiment was created, first known as the Regimento de Lanceiros da Rainha, in English, Queen's Lancers Regiment, with the motto "Morte ou Glória", "Death or Glory" (same as 17th Lancers, since Lt. Col. Sir Anthony Bacon was its first commander), a fortunate coincidence since the Queen's name was Maria da Glória.

Maria II was heir to her brother Pedro II as Princess Imperial until her exclusion from the Brazilian line of succession by law no. 91 of 30 October 1835. 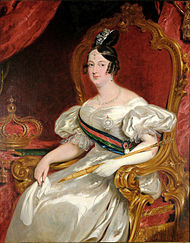 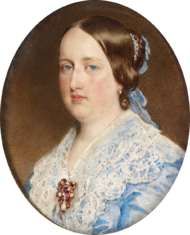 On 26 January 1835 Maria married, at the age of fifteen, Auguste, Duke of Leuchtenberg, son of Eugène de Beauharnais, and grandson of Empress Josephine. However, he died only two months later on 28 March 1835.

On 1 January 1836, she married the cultured and able Prince Ferdinand of Saxe-Coburg and Gotha. He received the title of King consort in 1837, in accordance with Portuguese custom, upon the birth of their first child Peter, an heir to the throne.

In 1842, Pope Gregory XVI presented Maria with a Golden Rose.

Maria's reign saw a revolutionary insurrection on 16 May 1846, but this was crushed by royalist troops on 22 February 1847, and Portugal otherwise avoided the European upheavals of 1848. Maria's reign was also notable for a public health act aimed at curbing the spread of cholera throughout the country. She also pursued policies aimed at raising the levels of education throughout the country.

After constant pregnancies and births, doctors warned Maria of the dangers of giving birth nearly every year. However, she ignored the risks that had killed her mother, who had died of complications following a miscarriage after many births; "If I die, I die at my post", Maria said. In 1853 she died in Lisbon, while giving birth to her eleventh child, Infante Eugénio, who also died.

Maria II is remembered as a good mother and a kind person, who always acted according to her convictions in the attempt to help her country. She was later given the surname "The Good Mother."