Maria I of Portugal

From Infogalactic: the planetary knowledge core
Jump to: navigation, search
"Maria I" redirects here. For other uses, see Mary I.
For other people of the same name, see Maria of Portugal.

Dona Maria I (English: Mary I) (17 December 1734 – 20 March 1816) was Queen of Portugal, Brazil, and the Algarves. Known as Maria the Pious (in Portugal), or Maria the Mad (in Brazil), she was the first undisputed Queen regnant of Portugal. With Napoleon's European conquests, her court, then under the direction of Prince Dom João, the Prince Regent, moved to the then Portuguese colony of Brazil. Later on, Brazil would be elevated from the rank of a colony to that of a Kingdom, with the consequential formation of the United Kingdom of Portugal, Brazil and the Algarves. 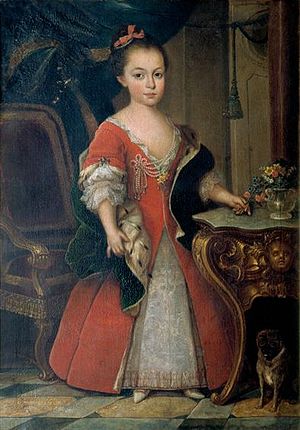 Maria was born at the Ribeira Royal Palace in Lisbon and baptized Maria Francisca Isabel Josefa Antónia Gertrudes Rita Joana. On the day of her birth, her grandfather, King João V of Portugal, created her the Princess of Beira.

When her father succeeded to the throne in 1750 as José I, Maria, at age 16 and as his eldest child, became his heiress presumptive and was given the traditional titles of Princess of Brazil and Duchess of Braganza.

Influence of the Marquis of Pombal

Maria grew up in a time when her father's government was dominated completely by the first Marquis of Pombal. Her father would often retire to the Queluz National Palace which was later given to Maria and her husband.

The Marquis took control of the government after the terrible 1755 Lisbon earthquake of 1 November 1755, in which around 100,000 people lost their lives. (The palace of her birth was also destroyed in the disaster.)

After the earthquake, Maria's father was often uncomfortable at the thought of staying in enclosed spaces, and later suffered from claustrophobia. The king had a palace built in Ajuda, away from the city centre. This palace became known as Real Barraca de Ajuda (Royal Hut at Ajuda) because it was made of wood. The family spent much time at the large palace, and it was the birthplace of Maria's first child. In 1794 the palace burned to the ground and Ajuda National Palace was built in its place.

In 1760 Maria married her uncle Pedro, younger brother of her father Jose I. They had six children, of whom the eldest surviving son succeeded Maria as João VI on her death in 1816. 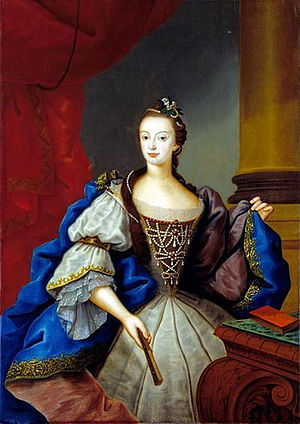 In 1777, she became the first undisputed queen regnant of Portugal and the Algarves. With Maria's accession, her husband became king as Peter III. Despite Peter's status as king and the nominal joint reign, the actual regal authority was vested solely in Maria[citation needed] as she was the lineal heir of the Crown; also, as Peter's kingship was iure uxoris only, in the event of Maria's death, his reign would cease, and the Crown would pass to Maria's descendants. However, Peter would predecease his wife. Maria is considered as having been a good ruler in the period prior to her madness.

Her first act as queen was to dismiss the popular Secretary of State of the Kingdom, the Marquis of Pombal, who had broken the power of the reactionary aristocracy via the Távora affair, partially because of Pombal's Enlightenment, anti-Jesuit policies.

Noteworthy events of this period were Portugal's membership of the League of Armed Neutrality (July 1782) and the 1781 cession of Delagoa Bay from Austria to Portugal.

Queen Maria suffered from religious mania and melancholia. This acute mental illness (perhaps due to porphyria, which also may have tainted George III of the United Kingdom) made her incapable of handling state affairs after 1792.[1] 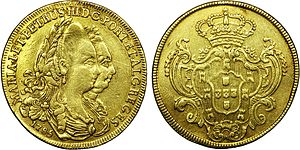 Her madness was first officially noticed in 1786 when Maria had to be carried back to her apartments in a state of delirium. The queen's mental state became increasingly worse. In May 1786 her husband died; Maria was devastated and forbade any court entertainments.

According to a contemporary[who?] the state festivities resembled religious ceremonies. Her state worsened after the death of her eldest son (and heir-apparent), aged 27, from smallpox, and of her confessor, in 1791.

In February 1792, she was deemed mentally insane and was treated by Francis Willis, the same physician who attended George III of the United Kingdom. Willis wanted to take her to England, but that was refused by the Portuguese court. Maria's second son (eldest surviving) and new heir-apparent, John, took over the government in her name, even though he only took the title of Prince Regent in 1799.[2]

When the Real Barraca de Ajuda burnt down in 1794, the court was forced to move to Queluz, where the ill queen would lie in her apartments all day. Visitors would complain of terrible screams that would echo throughout the palace. 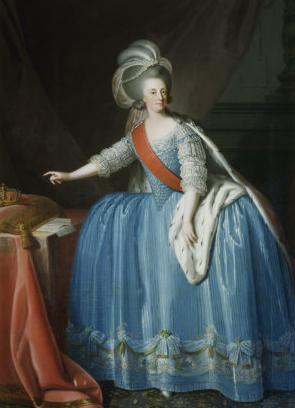 Portrait of the Queen Dona Maria I with a Crown, Giuseppe Troni, 1783.

In 1801, the Spanish Prime Minister, Manuel de Godoy, Prince of the Peace, invaded Portugal with backing from Napoleon. He was later forced to abandon the campaign that same year. Though the Spanish ceased their invasion, the Treaty of Badajoz on 6 June 1801 forced Portugal to cede Olivença and part of Guyana[citation needed] to Spain. This cession is not recognized by the present government and Portugal officially considers those territories to still be Portuguese.

The refusal of the Portuguese government to join the Continental Blockade against Britain culminated in the 1807 Franco-Spanish invasion led by General Junot.

The ultimate Napoleonic plan for Portugal was to split it into three sections. The northern parts of Portugal, from the Douro to the Minho, would become the Kingdom of Northern Lusitania, and its throne was promised to King Carlo Lodovico II of Etruria. The Alentejo Province and Kingdom of the Algarve would be put together to form the Principality of the Algarves, of which Spanish Prime Minister Manuel de Godoy would be sovereign. The remaining portion of Portugal would have been directly ruled by France.

Main article: Transfer of the Portuguese Court to Brazil

At the urging of the British government, on 29 November 1807, the entire Braganza dynasty decided to flee to Brazil to establish a Cortes-in-exile, in the Portuguese Viceroyalty of Brazil.

Along with the Royal Family, she was transported aboard the nau Príncipe Real. During her move from the Royal palace to the docks she was heard screaming throughout the trip, in the middle of the crowd and in the carriage. The Queen's dementia was so great that she feared that she was going to be tortured or robbed during her movement by her servants. 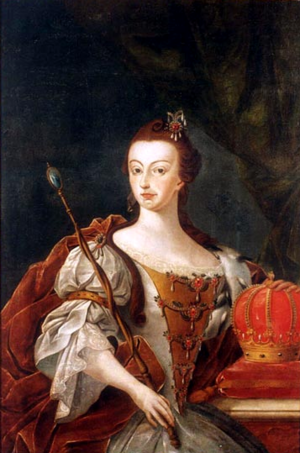 In January 1808, Prince Regent João and his court arrived in Salvador da Bahia. After his arrival and persistence by local aristocracy and the British, the Prince Regent signed a commercial regulation that opened commerce between Brazil and friendly nations, which in this case represented England. This important law broke the colonial pact that, until then, only allowed Brazil to maintain direct commercial relations with Portugal.

On 1 August 1808, the British General Arthur Wellesley (later Duke of Wellington) landed a British army in Lisbon and thus initiated the Peninsular War. Wellesley's initial victory over Junot at Vimeiro (21 August 1808) was wiped out by his superiors in the Convention of Cintra (30 August 1808).

Nevertheless, Wellesley (now Lord Wellington) returned to Portugal on 22 April 1809 to recommence the campaign. Portuguese forces under British command distinguished themselves in the defence of the lines of Torres Vedras (1809–1810) and in the subsequent invasion of Spain and France.

In 1815, Prince Regent João government elevated Brazil to the status of a kingdom, and Maria I was proclaimed the Queen of the United Kingdom of Portugal, Brazil and the Algarves. When Napoleon was finally defeated in 1815, Maria and her family remained in Brazil. 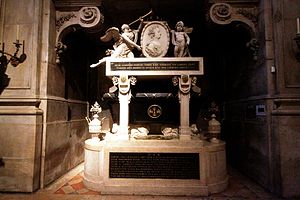 Tomb of Maria I at Estrela Basilica, Lisbon, Portugal

Incapacitated, Maria lived in Brazil for eight years, always in an unhappy state. In 1816, the Queen died at the Carmo Convent in Rio de Janeiro at the age of 81. After her death, Prince Regent João was acclaimed the King of Portugal, Brazil, and the Algarves and her body was returned to Lisbon, and interned in a mausoleum in the Estrela Basilica (Portuguese: Basilica da Estrela), that she had helped found.

Maria is a greatly admired figure in both Brazil and Portugal, due to the tremendous changes and events that took place during her reign. In Portugal, she is celebrated as a strong female figure. Her legacy shines at Portugal's Queluz National Palace, a baroque-roccoco masterpiece that she helped conceive. A large statue of her stands in front of the palace, and a pousada near the palace is named in her honour. A large marble statue of the Queen was erected at the Portuguese National Library in Lisbon, by the students of Joaquim Machado de Castro.

In Brazil, she is admired as a key figure in the eventual independence of Brazil. It is during her reign, though acted through her son's regency, that many of the institutions and organizations in Brazil were created. These institutions were the precursors to their modern-day equivalents and granted large degree of power to the Brazilian colonials. While she is often called A Louca (the Mad) in Brazil, Brazilian and Portuguese historic scholars hold her in high esteem.

Main article: List of titles and honours of the Portuguese Crown

The official styling from her accession till 1815 was:
By the Grace of God, Maria I, Queen of Portugal and the Algarves, of either side of the sea in Africa, Lady of Guinea and of Conquest, Navigation and Commerce of Ethiopia, Arabia, Persia and India, etc

With the creation of the Kingdom of Brazil, her style changed to:
By the Grace of God, Maria I, Queen of the United Kingdom of Portugal, Brazil, and the Algarves, of either side of the sea in Africa, Lady of Guinea and of Conquest, Navigation and Commerce of Ethiopia, Arabia, Persia and India, etc.

As Queen of Portugal, Maria was Grand Mistress of the following Portuguese Orders:

Maria married her uncle, Infante Pedro of Braganza on 6 June 1760. At the time of their marriage, Maria was 25 and Pedro was 42. Despite the age gap, the couple had a happy marriage. Peter automatically became co-monarch (as Pedro III of Portugal) when Maria ascended the throne, as a child had already been born from their marriage. The couple had six children and a stillborn baby.

Media related to Maria I of Portugal at Wikimedia Commons