Maria Josepha of Austria (Maria Josepha Benedikta Antonia Theresia Xaveria Philippine, Polish: Maria Józefa; 8 December 1699 – 17 November 1757) was born an Archduchess of Austria, and from 1711 to 1717 was heiress presumptive to the Habsburg Empire. By her marriage to Augustus III of Poland she was the Electress of Saxony and Queen consort of the Polish-Lithuanian Commonwealth.

Maria Josepha was born in Vienna, an Archduchess of Austria as the eldest child of Joseph I, Holy Roman Emperor, and Princess Wilhelmina Amalia of Brunswick-Lüneburg. During the reign of her grandfather, Maria Josepha's father and uncle signed the Mutual Pact of Succession of 1703, which was issued by her grandfather, Emperor Leopold I, and effectively made Maria Josepha the heiress presumptive to her uncle, Emperor Charles VI;[1] however, Charles VI's Pragmatic Sanction of 1713 annulled the earlier agreement and made his daughter Maria Theresa his successor instead of Maria Josepha. 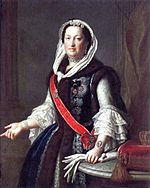 A marriage between Maria Josepha and Frederick Augustus II, Elector of Saxony (1796–1763) had been suggested by Frederick's father, August II the Strong, since 1704. The fact that Maria Josepha was not allowed to marry a non-Catholic, however, prevented the marriage. When Augustus converted to Catholicism in 1712, the negotiations became serious. On 20 August 1719, Maria Josepha and Frederick Augustus married. Through this marriage between the Houses of Wettin and Habsburg, Frederick Augustus II's father, hoped to place Saxony in a better position should there arise a war of succession to the Austrian territories.[2] The couple's eldest surviving son, Frederick Christian, eventually succeeded his father as Elector of Saxony. In Saxony, the couple lived at Dresden Castle. The marriage has been described as happy, and Augustus was apparently never unfaithful.

In 1733, Frederick Augustus was elected King of the Polish-Lithuanian Commonwealth as August III the Saxon.[2] Maria Josepha was crowned 20 January 1734. Queen Maria Josepha was described as ambitious, intelligent and religious. She founded many churches and convents and gave her strong support to the Polish Jesuits.

As queen of Poland and electress of Saxony, she divided her time between the two nations. Though Saxony was her main residence, she enjoyed her stays in Poland because it was a Catholic nation where she could exercise her faith openly: between November 1734 to February 1736 she and Frederick Augustus stayed their longest visit to Poland, prolonged because of the War of the Polish Succession, but continued to make frequent trips, five one lasting from between five to eight months each, and several shorter trips lasting a couple om months less. She learned to speak Polish, and was often present during the assemblies of the Polish parliament. During her period of absence, she frequently corresponded with her children in French, and she had a somewhat more close relationship to them than what was usual for her class: she gave them pet names and encouraged them to write to her in an informal way.[3] She shared an interest of music, art and hunting with her spouse, and they usually spent their autumns at the Palace of Hubertusburg for the hunting season. She was devoted to Catholicism and especially worshiped saint Francis Xavier, and was actively involved in the building of the Catholic Hofkirche in Dresden.[3] Her personal confessor, the Jesuit Fr. Anton Hermann, did actually criticize her for being too religious from what was proper from someone not a member of a Catholic monastic order: she attended mass twice and eventually four times a day and kept more devotions than what was normal for a nun or a monk, and he eventually lectured her that she was more fervent than what could be regarded as modest for a lay person.[3] She did, however, not persecute non-Catholics, and once stressed to the heir to the throne that he should not persecute the non-Catholic but allow them all freedom though let himself be guided by the Catholic faith: she also gave alms to both the Catholic and Protestant poor.[3] Despite her personal strict moral, she was reportedly not a prude and got along quite nicely with the illegitimate half siblings of her spouse.[3] She was rivaled in her influence over her spouse by Heinrich von Brühl. 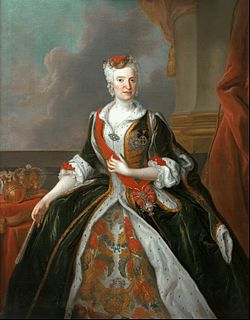 Maria Josepha as Queen of Poland, by Louis de Silvestre

Queen Maria Josepha was politically active and, though not formally proclaimed regent during the absence of her spouse, she informally acted as his representative.[3] It was known and acknowledged by the court that she participated in the affairs of state, and the ministers and ambassadors duly reported to her. She also managed a large diplomatic correspondence.[3] Maria Josepha was reportedly not on good terms with her eldest son Frederick Christian. She wished for her younger son Francis Xavier to be elected king of Poland rather than Frederick Christian succeeding his father on both thrones, and she prevented Frederick Christian and his spouse from visiting Poland to prevent them from making connections there. She undermined any attempts of Frederick Christian to found a power base of his own before the death of his father, and among other things prevented a meeting between him and his spouse with empress Maria Theresa in Bohemia in 1754.[3]

During the War of the Austrian Succession in 1740, she claimed the throne on behalf of her spouse. She relinquished her claim in favor of her sister, Maria Amalia's spouse, and in 1742 made an alliance with Austria.

During the seven years war, Maria Josepha stayed behind in Dresden with Frederick Christian and his spouse Maria Antonia, after her husband left on 20 October 1756. She remained in Dresden when the city was taken by the Prussian army.[4] She, as well as Frederick Christian and his spouse Maria Antonia, were all placed under house arrest at the palace of Dresden guarded by a Prussian commandant.[3] Maria Josepha was banned from writing to her sons, but did engage in correspondence with invisible ink and use her net of correspondence to help her son and daughter-in-law to encourage resistance in Saxony against the invading Prussians: despite several restrictions, she managed to channel secret information on the Saxon Field Marshall Browne besieged by Frederick the Great at Struppen.[3] On 4 April 1757, her Mistress of the Chamber, Countess Ogilvy, was arrested. Her last letter of 6 September was sent to the Austrian empress through her exiled son, in which she also mentions that this would be her last, as she was too heavily guarded.[3]

On 17 November 1757, Maria Josepha died in Dresden of a stroke and was buried in the Wettin vault of the Katholische Hofkirche ("Catholic Court Church") in Dresden.[5]

Media related to Maria Josepha of Austria at Wikimedia Commons