A member of the House of Wittelsbach, she was born in Munich, Bavaria.

Maria Josepha was the seventh and youngest child of Charles Albert, Elector of Bavaria and Holy Roman Emperor. Her mother, Maria Amalia was an Archduchess of Austria by birth. Her maternal grand parents were Joseph I, Holy Roman Emperor and Wilhelmina Amalia of Brunswick-Lüneburg. Her paternal grand parents were Maximilian II Emanuel, Elector of Bavaria and Theresa Kunegunda Sobieska, the daughter of the King of Polish–Lithuanian Commonwealth, John III Sobieski. Josepha's mother, Archduchess Maria Amalia was also a first cousin to her future mother-in-law, Empress Maria Theresa, and therefore Josepha was a second cousin to her future husband, Joseph, King of the Romans.

Maria Josepha was first married by proxy on 13 January 1765, to her second cousin, the widowed Joseph, King of the Romans, and heir of Empress Maria Theresa of Austria in Munich, Germany. Upon her arrival to Vienna from Munich, her husband did not seem to be dissatisfied with his new wife and neither did the entourage who greeted the princess. She and Joseph formally married on 25 January 1765, at the Schönbrunn Palace in Vienna, amidst suitable festivities.[2]

The marriage, however, was never happy; it had taken place only under pressure from Joseph's mother, Maria Theresa, who wanted her son to provide an heir to the throne. Joseph, however, had never wanted to remarry after the death of his beloved first wife, Isabella of Parma, although he had made some overtures toward Isabella's younger sister Maria Luisa of Parma. Maria Luisa, however, was already promised to the crown prince of Spain and in any case was not interested.

Joseph did not find Maria Josepha physically attractive either—he described her in a letter when he first saw her as, "She is twenty five. She has never had smallpox, and the very thought of the disease makes me shudder. Her figure is short, thickset, and without a vestige of charm. Her face is covered with spots and pimples. Her teeth are horrible." However, Wenzel Anton, Prince of Kaunitz-Rietberg, had wanted that Joseph marry Maria Josepha because of the Bavarian connection, so she was ultimately selected to be Joseph's bride.

A month after his wedding, Joseph sent off a long, self-pitying letter to his first wife's father. He did not have anything in common with his new wife, he admitted, however, that as far as her character was concerned, Maria Josepha was an "irreproachable woman" who loved him, and that he valued her for her positive traits but suffered because he could not love her. Even her enemies admit that Josepha was amiable, obliging, friendly to all and disposed to every kind or benevolent sentiment; but, her understanding was narrow as well as deficient in cultivation.[3] Joseph further added, "I will keep the path of honour, and if I cannot be an affectionate husband, at least she will have in me a friend, who appreciates her good qualities and treats her with every imaginable consideration." Though Joseph never kept his word. 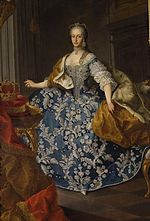 As time went on he did more than treat Josepha with perfect frigidity. Maria Josepha's sister-in-law, Archduchess Marie Christine, once wrote: "I believe if I were his (Joseph's) wife and so maltreated I would run away and hang myself on a tree in Schonbrunn." Despite Joseph's cold behaviour towards her, Maria Josepha, had loved her husband with much ardour and was deeply affected by his unkindness towards her. Being of a meek and timid disposition, and conscious of her own inferiority, she trembled and turned pale whenever she came in her husband's presence.[4]

The only member of the imperial family who took the poor young queen under his wing was her father-in-law, Emperor Francis I, and when Francis died all too soon after her marriage, she had no real friend left in the world. Upon Francis I's death on 18 August 1765, Maria Josepha became Empress of the Holy Roman Empire following her husband's accession to the throne. Her mother-in-law, however, remained the most powerful and important figure in the Empire and at court in Vienna.

Maria Josepha and Joseph's short-lived marriage did not produce any children, but for much of the two years of her marriage, Josepha's state of health led her and others to suppose that she was pregnant. In October 1765, in sentences delicately omitted by Arneth from a published version of a letter to his younger brother Leopold, Joseph wrote : 'As for my empress, there is no change. She has no illness but considerable disturbance. She (Josepha) maybe pregnant though without the slightest swelling. I just don't understand it, and I console myself with the happy life I lead as a bachelor husband.'[5]

Next month, he wrote: 'I live almost as a bachelor, getting up at 6 o'clock in the morning, going to bed at 11, seeing my wife only at table and touching her only in bed.' [6] In the same month, Josepha's mistress of the household retired, because she could no longer bear to contemplate the tableau de ce mauvais menage. Apparently, the young empress had made matters worse for herself by telling her troubles to her servants.

On 28 May 1767, after only two years of marriage, Maria Josepha died of smallpox as had her predecessor Isabella. Upon the young empress' death, the Court immediately plunged into mourning.[7] Her husband did not visit her during her illness, although her mother-in-law, Maria Theresa, did. In doing so, Maria Theresa also caught the disease but survived.

In Joseph's first reaction to receiving the news of his wife's death, he had told some of his intimates some remarks which imply regrets for the coldness he had shown to her. He further brought himself to tell his sister-in-law, Princess Maria Antonia, that his wife had been "for so many reasons worthy of respect".[8] Maria Josepha was buried in the Imperial Crypt in Vienna, but Joseph did not attend her burial.[9]

The unloved young empress played a role in her husband's life once more after her death, when he laid claim to a large part of Bavaria in 1778–1779. He based his claim on, among other grounds, his marriage to his Bavarian second wife. This conflict eventually grew into the War of the Bavarian Succession. In the end, the Habsburg dynasty gained only the Innviertel.[10]