Maria Theresa of Naples and Sicily

Born Maria Teresa, and named after her maternal grandmother Maria Theresa of Austria, she was the eldest of 17 children born to her parents, the King and Queen of Naples and Sicily. Her father was a son of Charles III of Spain and Princess Maria Amalia of Saxony. Through her mother she was a niece of Marie Antoinette; through her father she was a niece of Maria Luisa of Spain and Charles IV of Spain. She was her mother's favourite child from birth until she left the Neapolitan court to marry.

Her brothers included the future King Francis and Leopold, Prince of Salerno. Another, Carlo, Duke of Calabria died in 1778 aged 3 of smallpox. 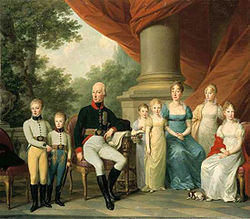 Maria Theresa with her husband and children.

On 15 September 1790 she married her double first cousin Archduke Francis of Austria, who would later become Holy Roman Emperor Francis II, and then Emperor Francis I of Austria. The marriage is described as a happy one, despite differences in personality.

Maria Theresa was described as easy-going with a sensuous appearance. She loved masquerades and carnivals, and participated in every ball even while she was pregnant.

Hedwig Elizabeth Charlotte of Holstein-Gottorp described the view of Maria Theresa and the relationship between the couple in her famous diary during her visit to Vienna in 1798–99:

The Empress is reputed to be so jealous that she does not allow him to take part in social life or meet other women. Vicious tongues accuse her of being so passionate that she exhausts her consort and never leaves him alone even for a moment. Although the people of Vienna cannot deny that she is gifted, charitable and carries herself beautifully, she is disliked for her intolerance and for forcing the Emperor to live isolated from everyone. She is also accused of interesting herself in unimportant matters and socializing exclusively with her lady-companions. With them she spends her evenings singing, acting out comedies and being applauded.[1]

In February 1799, her seeming indifference to the revolution against her parents in Naples attracted some disfavour in Vienna.[2] Hedwig Elisabeth Charlotte also recounts a scene described to her by a foreigner, who bribed his way into the private park at Laxenburg and came to witness a scene between the couple:

"He saw the Emperor sitting on a bench, alone in his thoughts. Immediately, the Empress came to fetch him, and he exlaimed: "Can't you ever leave me alone, so that I may breathe for one moment? For God's sake, don't follow me around all the time."[3]

She did have some political influence, as she was interested in politics. She gave her husband advice and is believed to have been partially responsible for the dismissal of Johann Baptist Freiherr von Schloissnigg and Graf Franz Colloredo; she was also critical of Napoleon and encouraged her husband in the wars against him.

An important patron of Viennese music, she commissioned many compositions for official and private use. Joseph Haydn wrote his Te Deum for chorus and orchestra at her request. He also composed numerous masses to celebrate her reign. Her favourite composers included Paul Wranitzky and Joseph Leopold Eybler, a composer of sacred music.

Children of Maria Theresa of Naples and Sicily