Maria was a daughter of wealthy Anglo-Hellenic merchant Demetrios Cassavetti (d.1858) and his wife Euphrosyne (1822–1896) and niece of the Greek Consul and noted patron Alexander Constantine Ionides. Maria and her cousins Marie Spartali Stillman and Aglaia Coronio were known collectively among friends as "the Three Graces", after the Charites of Greek mythology. After inheriting her father's fortune in 1858, she was able to lead a more independent life and was known to go unchaperoned while still unmarried.[1]

Familiar within the circles of the Pre-Raphaelites for her dark red hair and pale skin, her most notable modelling was for the British artist Edward Burne-Jones. She also sat as a model for the American Whistler and Dante Gabriel Rossetti.

In 1860, she frightened off her first admirer, George du Maurier, who called her 'rude and unapproachable but of great talent and a really wonderful beauty'. Instead she married Dr Zambaco in 1860, initially living with him in France. She had a son and a daughter by him. The marriage was not a success and she moved back to live with her mother in London in 1866.

Burne-Jones first met her in 1866, when her mother commissioned him to paint her as Cupid and Psyche, and they had an affair which lasted until at least January 1869 and they stayed in contact after. In Georgiana Burne-Jones's The Memorials of Edward Burne-Jones, the affair is not mentioned but the years 1868-71 are described as 'Heart, thou and I here, sad and alone'.[8] In 1869, Edward Burne-Jones attempted to leave his wife for her, which caused a great scandal. Maria entreated him to commit suicide with her by laudanum overdose by the canal in Little Venice and the police had to be called.[9] After they broke up, Maria continued to appear in Burne-Jones' paintings as a sorceress or a temptress, such as his last major work of her, The Beguiling of Merlin, and the controversial Phyllis and Demophoön, which was removed from display at the Royal Watercolour Society. Friends of the Burne-Jones family, such as Rosalind Howard cut Maria socially.[10]

She died in Paris in 1914 and her body was returned for interment in the family sarcophagus at the Greek Orthodox necropolis of the South Metropolitan Cemetery at Norwood, where she is recorded under her maiden name. 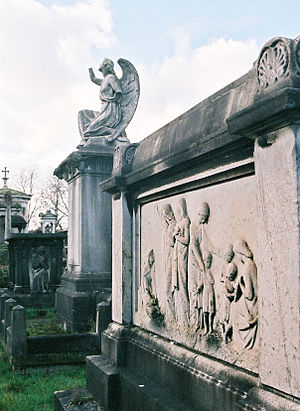