From Infogalactic: the planetary knowledge core
Jump to: navigation, search
This article is about the matriarch of the Trapp Family Singers. For her stepdaughter who died in 2014, see Maria Franziska von Trapp.

Maria was born on 26 January 1905, the daughter of Augusta (née Rainer) and Karl Kutschera.[7] She was delivered on a train heading from her parents' village in Tyrol to a hospital in Vienna, Austria.[5] She was an orphan by her seventh birthday. She graduated from the State Teachers College for Progressive Education in Vienna at age 18, in 1923. In 1924 she entered Nonnberg Abbey, a Benedictine monastery in Salzburg, as a postulant, intending to become a nun. This was according to Maria's autobiography though, as the Abbey itself kept no record of postulants.

In 1926, while still a schoolteacher at the abbey, Maria was asked to teach one of the seven children of widowed naval commander Georg von Trapp.[6][8] His wife, Agatha Whitehead, had died in 1922 from scarlet fever.[9] 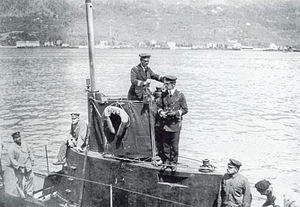 Eventually, Maria began to look after the other children, as well. Georg von Trapp, seeing how much she cared about his children, asked Maria to marry him, although he was 25 years her senior. Frightened, she fled back to Nonnberg Abbey to seek guidance from the Mother Abbess. The Mother Abbess advised Maria that it was God's will that she should marry the Captain; since Maria was taught always to follow God's will, she returned to the family and told the Captain she would marry him. She later wrote in her autobiography that on her wedding day she was blazing mad, both at God and at her husband, because what she really wanted was to be a nun: "I really and truly was not in love. I liked him but didn't love him. However, I loved the children, so in a way I really married the children. I learned to love him more than I have ever loved before or after."[10]

Maria and Georg married on 26 November 1927. They had three children together: Rosmarie (born 1928 or 1929), Eleonore ("Lorli") (born 1931), and Johannes (born 1939), who were the others' half-sisters and half-brother. A discrepancy exists for the birth date of their oldest child, Rosmarie. In 1944, Maria, under oath in her Declaration of Intention for naturalization, gave the date of the marriage as 26 November 1927 and the date of her first child's birth as 8 February 1928. This would indicate she was pregnant at the time of their marriage, and she gave birth only two months and 14 days after her marriage. She confirmed both the marriage and birthdate in her Petition for Naturalization, signed under oath, on 26 May 1948. The Trapp family disputes the 1928 date, and Maria used the year 1929 in her book. Photos from Maria and Georg's wedding (3rd photo page between pages 96 and 97 in Maria, by Maria von Trapp) show no evidence of a late-term pregnancy at that date, giving credence to the 1929 date, as does the fact that when the family visited the United States on 27 September 1939, the ship manifest lists Rosmarie as 10, not 11, years old.[11]

In 1935, the Trapps faced financial ruin. Georg had transferred his savings, held until then by a bank in London, to an Austrian bank run by a friend, Frau Lammer. Austria was at the time experiencing economic difficulties during a worldwide depression, because of the Crash of 1929. Lammer's bank failed, and the family faced a financial emergency.[12] To survive, the Trapps sent away most of their servants, moved into the top floor of their home, and rented the empty rooms to students of the Catholic University.[which?] The Archbishop sent Father Franz Wasner to stay with them as their chaplain, and thus began their singing career.[10]

Soprano Lotte Lehmann heard the family sing, and she suggested they perform at concerts. When the Austrian Chancellor Kurt Schuschnigg heard them on the radio, he invited them to perform in Vienna.[13]

After performing at a festival in 1935, they became a popular touring act. They experienced life under the Nazis after the annexation of Austria by Germany in March 1938. Life became increasingly difficult as they witnessed hostility towards Jewish children by their classmates, the use of children against their parents, the advocacy of abortion both by Maria's doctor and by her son's school, and finally by the induction of Georg into the German Navy. They visited Munich in the summer of 1938 and encountered Hitler at a restaurant. In September, the family left Austria and travelled to Italy, and then to the United States. The Nazis made use of their abandoned home as Heinrich Himmler's headquarters.[10]

Initially calling themselves the "Trapp Family Choir", the von Trapps began to perform in the United States and Canada. They performed in New York City at The Town Hall on 10 December 1938.[5][13][14][15] The New York Times wrote:

There was something unusually lovable and appealing about the modest, serious singers of this little family aggregation as they formed a close semicircle about their self-effacing director for their initial offering, the handsome Mme. von Trapp in simple black, and the youthful sisters garbed in black and white Austrian folk costumes enlivened with red ribbons. It was only natural to expect work of exceeding refinement from them, and one was not disappointed in this.[5][15] 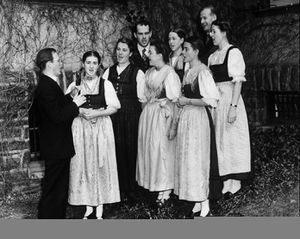 Preparing for a concert in Boston in 1941.

Charles Wagner was their first booking agent, then they signed on with Frederick Christian Schang. Thinking the name "Trapp Family Choir" too churchy, Schang Americanized their repertoire and, following his suggestion, the group changed its name to the "Trapp Family Singers".[10] The family, which by then included ten children, was soon touring the world giving concert performances.[5] Alix Williamson served as the group's publicist for over two decades. After the war, they founded the Trapp Family Austrian Relief fund, which sent food and clothing to people impoverished in Austria.

Move to the United States

In the 1940s, the family moved to Stowe, Vermont, where they ran a music camp when they were not touring. In 1944, Maria and her stepdaughters, Johanna, Martina, Maria, Hedwig, and Agathe applied for U.S. citizenship. Georg never applied to become a citizen. Rupert and Werner became citizens by serving during World War II. Rosemarie and Eleonore became citizens by virtue of their mother's citizenship. Johannes was born in the United States in September 1939, during a concert tour in Philadelphia.[12] Georg von Trapp died in 1947 in Vermont after suffering lung cancer.

The family made a series of 78 rpm discs for RCA Victor in the 1950s, some of which were later issued on RCA Camden LPs. There were also a few later recordings released on LPs, including some stereo sessions. The family also made an appearance on an Elvis Presley Christmas record. In 1957, the Trapp Family Singers disbanded and went their separate ways. Maria and three of her children became missionaries in Papua New Guinea. In 1965, Maria had moved back to Vermont to manage the Trapp Family Lodge, which had been named Cor Unum. Maria began turning over management of the Lodge to her only son, Johannes, although she was initially reluctant to do so.[16]

The family has won the following awards:[8]

The Sound of Music

Main article: The Sound of Music

Maria Von Trapp's book, The Story of the Trapp Family Singers, published in 1949, was a best-seller. It was made into two successful German/Austrian films:

The book was then adapted into The Sound of Music, a 1959 Broadway musical by Rodgers and Hammerstein, starring Mary Martin and Theodore Bikel. It was a success, running for more than three years. The musical was adapted in 1965 as a motion picture of the same name, starring Julie Andrews. The film version set US box office records, and Maria Von Trapp received about $500,000 ($4.1 million today) in royalties.[5]

Maria von Trapp made a cameo appearance in the movie version of The Sound of Music (1965). For an instant, she, her daughter Rosmarie, and Werner's daughter Barbara can be seen walking past an archway during the song, "I Have Confidence", at the line, "I must stop these doubts, all these worries/If I don't, I just know I'll turn back."[18] Maria von Trapp sang "Edelweiss" with Andrews on The Julie Andrews Hour in 1973.