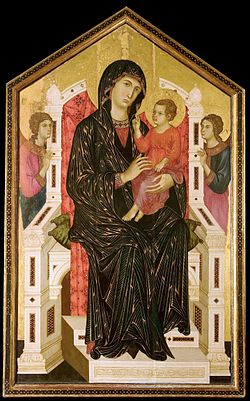 Madonna and Child, Master of Badia a Isola, c.1300

Marian papal encyclicals and Apostolic Letters have been a major force that has shaped Roman Catholic Mariology over the centuries. Mariology is developed by theologians on the basis not only of Scripture and Tradition but also of the sensus fidei of the faithful as a whole, "from the bishops to the last of the faithful",[1] and papal documents have recorded those developments, defining Marian dogmas, spreading doctrines and encouraging devotions within the Catholic Church.

Popes have been highly important for the development of doctrine and the veneration of the Blessed Virgin Mary. They made decisions not only in the area of Marian beliefs but also Marian practices and devotions. Before the twentieth century, Popes promulgated Marian veneration and beliefs by authorizing new Marian feast days, prayers, initiatives, and special privileges. Since Pope Leo XIII, Popes promulgated Mariology also with encyclicals, apostolic letters and with two dogmas (Immaculate Conception and Assumption).

This article reviews the major official teachings by the popes. In terms of formality, papal bulls and Apostolic Constitutions are above encyclicals, followed by Apostolic Letters.

This papal bull was issued by Pope Clement VIII on February 3, 1603. It considered Marian piety the basis for Church and condemned a number of issues as errors, including the denial of the virginity of Mary.[2]

The decree surveys the history of the belief in Christian tradition[citation needed], citing its roots in the long-standing feast of the Conception of Mary as a date of significance in the Eastern and Western churches. It also cites the approval of Catholic bishops worldwide who were asked in 1849 to offer their opinion on the matter.

This Apostolic Constitution Sodality of Our Lady was promulgated by Pope Pius XII on September 27, 1948, the two hundredth anniversary of the Papal bull Gloriosae Dominae of Pope Benedict XIV in 1748. It is important for the fact that Apostolic constitutions are the highest form of Papal teaching, above encyclicals, and below dogmatization ex cathedra.

The Sodality of Our Lady dates to 1584. It consists of associations of persons, sodalists, dedicated to a Christian life, following the model of the Virgin Mary. In Bis Saeculari, Pope Pius XII pointed to the importance of the Sodality of Our Lady within the Church which after four hundred years exist in all countries. They have produced virtuous lives among the faithful priests and saints. They still prepare men to be active in modern society.[3]

This Apostolic constitution (the title of which means "most bountiful God" in Latin) was issued by Pope Pius XII on November 1, 1950.

It defines ex cathedra the dogma of the Assumption of the Blessed Virgin Mary. It is the second ex-cathedra infallible statement ever made by a Pope, the first since the official ruling on Papal Infallibility was made at the First Vatican Council (1869-1870).

Coat of arms of Pius X

One of the reasons the pope gave for writing the encyclical was his desire for the restoration of all things in Christ which he had defined as his motto Instaurare omnia in Christo: to restore everything in Christ, to whom there is no safer or more direct road than Mary. To Pope Pius X, Mary unites all humankind in Christ.

This encyclical by Pope Pius XII issued on May 1, 1946 and was directed to all Catholic bishops on the possibility of defining the Assumption of the Blessed Virgin Mary as a dogma of faith.

The encyclical states, that for a long time past, numerous petitions have been received from cardinals, patriarchs, archbishops, bishops, priests, religious of both sexes, associations, universities and innumerable private persons, all begging that the bodily Assumption into heaven of the Blessed Virgin should be defined and proclaimed as a dogma of faith. This was also fervently requested by almost two hundred fathers in the Vatican Council (1869-1870).

This encyclical of Pope Pius XII focused on the rosary. It was given on the 15 September, the Feast of the Seven Sorrows of the Virgin Mary, in 1951.

The encyclical states that from the beginning of his pontificate, Pope Pius XII entrusted to the Mother of God the destiny of the human family. The Pope argued that the repeating of identical formulas has a great impact on those who pray, giving them confidence in Mary. He strongly supports the idea, that Catholic families should pray the rosary together. He stated that while reciting the Rosary, Catholics should not forget those who languish in prison camps, jails, and concentration camps.

This encyclical by Pope Pius XII was issued on 8 September 1953 on the Feast of the Nativity of the Blessed Virgin Mary. The encyclical proclaimed a Marian year for 1954, to commemorate the centenary of the definition of the dogma of the Immaculate Conception of the Virgin Mary. Fulgens corona is significant as it contained the Mariological methodology of Pope Pius XII and his views on limits and challenges of Roman Catholic Mariology.

One hundred years before, Pius IX, surrounded by a vast retinue of Cardinals and Bishops, with infallible apostolic authority defined, pronounced and solemnly sanctioned in the dogmatic bull Ineffabilis Deus.

It states that assumed into heaven, Mary is with Jesus Christ, her divine son. With the encyclical, Pope Pius XII institutes the feast Queenship of Mary. Mary should be called Queen, not only because of her Divine Motherhood of Jesus Christ, her only son, but also because God has willed her to have an exceptional role in the work of our eternal salvation.

John Paul II Coat of arms with the Marian Cross

Pope John Paul II delivered this encyclical on March 25, 1987. It is subtitled On the Blessed Virgin Mary in the life of the Pilgrim Church.

The encyclical discusses the special place of the Blessed Virgin Mary in the plan of salvation and continues to focus on Mary's role in the Mystery of Christ. In this encyclical Pope John Paul II confirmed the title, Mother of the Church, proclaimed by Pope Paul VI at the Second Vatican Council on November 21, 1964.

The encyclical also refers to Maternal Mediation and the role of the Virgin Mary as a Mediatrix.

This Apostolic Letter by Pope Pius XII was issued on September 27, 1748.

In this Apostolic Letter Pope Pius XII called the Blessed Virgin Mary "Queen of heaven and earth," stated that the sovereign King has in some way communicated to her his ruling power.

Pope Paul VI issued this Mariological Apostolic Letter on February 2, 1974. The letter is subtitled, For the Right Ordering and Development of Devotion to the Blessed Virgin Mary. The document does not focus on specific themes in Mariology, but clarifies the way the Roman Catholic Church celebrates liturgies that commemorate Mary and about Marian devotion. The preparation of the document reportedly took 4 years.[4]

This Apostolic Letter by Pope John Paul II was issued on October 16, 2002. It deals with the Holy Rosary and views it as compendium of the Gospel message:

The Rosary, though clearly Marian in character, is at heart a Christocentric prayer. In the sobriety of its elements, it has all the depth of the Gospel message in its entirety, of which it can be said to be a compendium.

The letter reaffirms the Roman Catholic beliefs on the power of the rosary and states: Through the Rosary the faithful receive abundant grace, as though from the very hands of the Mother of the Redeemer.