Moore was born in Kirkwood, Missouri, in the manse of the Presbyterian church where her maternal grandfather, John Riddle Warner, served as pastor. Her parents separated before she was born after her father, John Milton Moore, a mechanical engineer and inventor, suffered a psychotic episode; Moore never met him. She and her older brother, John Warner Moore, were reared by their mother, Mary Warner Moore. The family wrote voluminous letters to one another throughout their lives, often addressing each other by playful nicknames and using a private language.

Like her mother and her older brother, Moore remained a devoted Presbyterian, strongly influenced by her grandfather, approaching her Christian faith as a lesson in strength vindicated through trials and temptations; her poems often deal with the themes of strength and adversity.[1] She thought "it was not possible to live without religious faith".[2] After her grandfather died in 1894, the three stayed with relatives near Pittsburgh for two years, then moved to Carlisle, Pennsylvania, where her mother found employment teaching English in a private girls' school.

In 1905, Moore entered Bryn Mawr College, and she graduated four years later with an A.B., having majored in history, economics, and political science.[3] The poet H. D. was among her classmates during their freshman year. At Bryn Mawr, Moore started writing short stories and poems for Tipyn O'Bob,[4] the campus literary magazine, and decided to become a writer. After graduation, she worked briefly at Melvil Dewey’s Lake Placid Club, then taught business subjects at the Carlisle Indian Industrial School from 1911 to 1914.

Moore's first professionally published poems appeared in The Egoist and Poetry in the spring of 1915. Harriet Monroe, the editor of the latter, would describe them in her biography as possessing "an elliptically musical profundity".[5]

IIn 1916, she moved with her mother to Chatham, New Jersey, within commuting distance of New York; and in 1918, the two moved to New York City's Greenwich Village, where Moore socialized with many avant-garde artists, especially those associated with Others magazine. The innovative poems she was writing at that time received high praise from Ezra Pound, William Carlos Williams, H.D., T. S. Eliot, and later Wallace Stevens.

Moore's first book, Poems, was published in 1921 by the Imagist poet H.D. and her partner, the British novelist Bryher, without Moore's permission.[3][6] Moore's later poetry shows some influence from the Imagists' principles.[7]

Her second book, Observations, won the Dial Award in 1924. She worked part-time as a librarian during these years; then from 1925 to 1929, she edited The Dial magazine, a literary and cultural journal. This position in the literary and arts community extended her influence as an arbiter of modernist taste; much later, she encouraged promising young poets, including Elizabeth Bishop, Allen Ginsberg, John Ashbery, and James Merrill. When The Dial ceased publication in 1929, she moved to 260 Cumberland Street[8] in the Fort Greene neighborhood of Brooklyn, where she remained for thirty-six years. She continued to write while caring for her ailing mother, who died in 1947. For nine years before and after her mother’s death, Moore translated the Fables of LaFontaine. 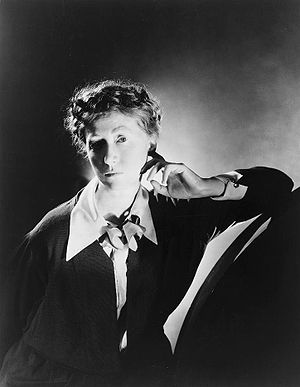 In 1933, Moore was awarded the Helen Haire Levinson Prize by Poetry magazine. In 1951, her Collected Poems won the National Book Award,[9] the Pulitzer Prize, and the Bollingen Prize. After years of seclusion, she emerged as a celebrity, speaking at college campuses across the country and appearing in photo essays in Life and Look magazines. She was elected a Fellow of the American Academy of Arts and Sciences in 1962.[10] Moore continued to publish poems in various magazines, including The Nation, The New Republic, Partisan Review, and The New Yorker, as well as publishing various books and collections of her poetry and criticism.

Moore moved to 35 West 9th Street in Manhattan in 1965. After she moved back to Greenwich Village, she was widely recognized around town for her tricorn hat and black cape. She liked athletics and was a great admirer of Muhammad Ali, for whose spoken-word album I Am the Greatest! she wrote the liner notes. She became known as a baseball fan, first of the Brooklyn Dodgers and then of the New York Yankees. She threw out the ball to open the season at Yankee Stadium in 1968. She suffered a series of strokes from 1958 until her death in 1972. She was interred in Gettysburg's Evergreen Cemetery. By the time of her death, she had received many honorary degrees and virtually every honor available to an American poet. The New York Times printed a full-page obituary.[11] In 1996, she was inducted into the St. Louis Walk of Fame.[12]

Moore corresponded with Ezra Pound from 1918 and visited him regularly during his incarceration at St. Elizabeth's. She opposed Benito Mussolini and Fascism from the start and objected to Pound's antisemitism. Moore herself was a Republican and supported Herbert Hoover in 1928 and 1932.[13][14][15] She was a lifelong ally and friend of the American poet Wallace Stevens, as demonstrated in her review of Stevens's first collection, Harmonium, and in particular her comment about the influence of Henri Rousseau on the poem "Floral Decorations for Bananas". She also corresponded, from 1943 to 1961, with the reclusive collage artist Joseph Cornell, whose methods of collecting and appropriation were much like her own.[16]

In 1955, Moore was informally invited by David Wallace, manager of marketing research for Ford's "E-car" project, and his co-worker Bob Young to suggest a name for the car. Wallace's rationale was "Who better to understand the nature of words than a poet?" On October 1955, Moore was approached to submit "inspirational names" for the E-car, and on November 7, she offered her list of names, which included such notables as "Resilient Bullet", "Ford Silver Sword", "Mongoose Civique", "Varsity Stroke", "Pastelogram" and "Andante con Moto." On December 8, she submitted her last and most famous name, "Utopian Turtletop." The E-car was finally christened by Ford as the Edsel.[17]

Moore never married. Her living room has been preserved in its original layout in the collections of the Rosenbach Museum & Library in Philadelphia.[18] Her entire library, knick-knacks (including a baseball signed by Mickey Mantle), all of her correspondence, photographs, and poetry drafts are available for public viewing.

Like Robert Lowell, Moore revised many of her early poems in later life. Most of these revised works appeared in the Complete Poems of 1967. Facsimile editions of the theretofore out-of-print 1924 Observations became available in 2002. Since that time, there has been no critical consensus about which versions are authoritative. As Moore herself wrote, as a one-line epigraph to Complete Poems, which offered her well-known work "Poetry" cut down from twenty-nine lines to three: "Omissions are not accidents."[19][20][21] In a foreword to A Marianne Moore Reader in 1961, Moore said her favorite poem was the Book of Job.[22]

Photo of the elm in Prospect Park

Moore's novel and an unfinished memoir have not been published.[22] In her will, she established a fund for the support of the Camperdown Elm in Brooklyn's Prospect Park, a rare and ancient tree that she had celebrated in a poem.[23]

In 2012 Moore was inducted into the New York State Writers Hall of Fame.

Her most famous poem is perhaps the one entitled, appropriately, "Poetry", in which she hopes for poets who can produce "imaginary gardens with real toads in them". It also expressed her idea that meter, or anything else that claims the exclusive title "poetry", is not as important as delight in language and precise, heartfelt expression in any form. Moore's meter was radically separate from the English tradition; writing her syllabic poems after the advent of free verse, she was thereby encouraged to try previously unusual meters.[24]

Moore credited the poetry of Edith Sitwell as "intensifying her interest in rhythm and encouraging her rhythmic eccentricities".[1] In response to a biographical sketch in 1935, Moore indicated "a liking for unaccented rhyme, the movement of the poem musically is more important than the conventional look of lines upon the page, and the stanza as the unit of composition rather than the line".[2] Later in her Selected Poems of 1969, Moore also commented in regard to her poetic form that "in anything I have written, there have been lines in which the chief interest is borrowed, and I have not yet been able to outgrow this hybrid method of composition".[25]

Moore often composed her poetry in syllabics, she used stanzas with predetermined number of syllables as her "unit of sense", with indentation underlining the parallels, the shape of the stanza indicating the syllabic disposition, and her reading voice conveying the syntactical line.[26] These syllabic lines from "Poetry" illustrate her position: poetry is a matter of skill and honesty in any form whatsoever, while anything written poorly, although in perfect form, cannot be poetry:

nor is it valid

to discriminate against "business documents and

school-books": all these phenomena are important. One must make a distinction

however: when dragged into prominence by half poets, the result is not poetry