Marie-Adélaïde, Grand Duchess of Luxembourg (Luxembourgish: Marie Adelheid; full list of given names: Marie Adelheid Thérèse Hilda Wilhelmine; 14 June 1894 – 24 January 1924), reigned from 1912 to 1919. She was the first Grand Duchess regnant of Luxembourg (after five Grand Dukes), its first female monarch since Duchess Maria Theresa (1740–1780, who was also Austrian Empress) and the first Luxembourgish monarch to be born within the territory since Count John the Blind (born in 1296).

Named as heir presumptive by her father HRH Grand Duke William IV in 1907 to prevent a succession crisis due to his lack of a son, Marie-Adélaïde became Grand Duchess in 1912. She ruled through the First World War, and her perceived support for the German occupation forces led to great unpopularity in Luxembourg as well as neighbouring France and Belgium. In 1919, on the advice of Parliament and after enormous pressure from the Luxembourgish people, she abdicated on 15 January 1919 in favour of her younger sister Charlotte who managed to save the monarchy and the dynasty in a national referendum (28 September 1919).

After abdicating, Marie-Adélaïde retired in a monastery in Italy, before leaving due to ill health. She died of influenza in Germany on 24 January 1924 at the age of 29. 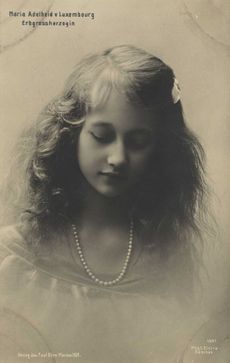 Marie-Adélaïde was born on 14 June 1894 in Berg Castle as the eldest child of Grand Duke William IV and his wife, Marie Anne of Portugal.

Since her father had six daughters and no sons, he proclaimed Marie-Adélaïde as the heir presumptive on 10 July 1907, in order to solve any succession crisis due to the use of Salic law in the monarchy.

Due to that same Salic Law, the elder branch of the House of Nassau, called Nassau-Weilburg (present-day Luxembourg-Nassau) inherited in 1890 the throne of Luxembourg from the younger branch called Nassau-Orange, which was not only supplying the Grand Dukes of Luxembourg from 1815 to 1890, but was also in a personal union (and still is) the reigning dynasty of the Kingdom of the Netherlands.

Thus, when her father died on 25 February 1912, she succeeded to the throne at the age of 17, becoming the first reigning Grand Duchess of Luxembourg. Her mother served as regent until Marie-Adélaïde's eighteenth birthday on 18 June 1912, when the Prime Minister Auguste Laval swore her in as the first Luxembourgish monarch to be born in the territory since Count John the Blind (born in 1296). Laval's speech to the Chamber of Deputies (parliament) during the ceremony was:

Consider it, gentlemen, as a happy moment for the future of the country, the fact that the Grand Duchess Marie-Adélaïde is the first of our sovereigns to have been born on the Grand Ducal soil, the first to have been raised there, and who, from her earliest childhood has breathed the air of our native land and learnt the ideas, the aspirations and the traditions of the people to whom she has been called reign over.[1]

Marie-Adélaïde's own speech at the ceremony was:[1]

Marie-Adélaïde was highly interested in politics and took an active part in the government and the political life of the Grand Duchy in accordance with the Luxembourgish Constitution which at that time granted the monarch extensive political powers. She was a devout Roman Catholic, with strong religious convictions and very conservative political views. On the day of her ascension to the throne – 25 July 1912 – she refused to sign a new law reducing the role of Roman Catholic priests within the education system.[2] Later, in 1915, she hesitated before appointing the mayors of Differdange and Hollerich, both known for their anticlerical views.[3]

With the outbreak of the First World War in 1914, the German Empire violated the neutrality of Luxembourg established and recognized in International Law by invading the country on 2 August. Although Marie-Adélaïde issued a formal protest, this did nothing to prevent the military occupation of Luxembourg. She decided not to resist the occupying army, but tried instead to maintain formally her country's neutrality throughout the war.

However, during the war she developed a rather cordial relationship with the German occupiers (including hosting the German Kaiser Wilhelm II in the palace and allowing the German Kronprinz to establish his temporary military headquarters in Luxembourg City),[1] an attitude which made her very unpopular with the Luxembourgish population, especially after she refused as well to send away her German entourage who was part of the Grand Ducal Household (= palace personnel).

Meanwhile, in late 1916 the Grand Duchess caused controversy by dissolving the Chamber of Deputies to solve the deadlock faced by the Loutsch Ministry, which was composed of Party of the Right members and did not have a majority in the Chamber.[3] Marie-Adélaïde ordered the Chamber dissolved and new elections held on 23 December 1916.[3] This action was permissible under the Constitution, but regarded as unconventional, and provoked an outcry and long-term resentment among the socialists and liberals in parliament, who saw it as resembling a coup d'état.[3]

Although she had not done anything flagrantly in contradiction with the Luxembourgish Constitution (of 1868, with a major revision in 1919 after her departure), voices in Parliament began to demand her abdication in January 1919. At the same time, prominent political figures in both neighbouring France and Belgium were adopting annexationist plans towards the Grand Duchy and thus had a vested interest in further discrediting Marie-Adélaïde.

On 9 January, a group of Socialist and Liberal Luxembourgish Members of Parliament ("Deputies") publicly proclaimed a republic after losing a vote in parliament to abolish the monarchy, a situation which was followed by public unrest in the streets requiring even the intervention of the French Army to restore order.[1] Under intense national (and international) pressure, and after consulting with the Prime Minister, the 24-year-old Grand Duchess decided to abdicate (14 January 1919). She was succeeded by her younger sister, Charlotte.[4]

After her abdication Marie-Adélaïde went into exile by travelling through Europe. She entered a Carmelite convent in Modena, Italy, in 1920. Later, she joined the Little Sisters of the Poor in Rome, taking the name "Sister Marie of the Poor". Her worsening health did not allow her to remain a nun, however, and she eventually had to leave the convent. She then moved to Schloss Hohenburg in Bavaria, where she died of influenza in 1924. On 22 October 1947, her body was interred in the Grand Ducal Crypt of the Notre-Dame Cathedral in the city of Luxembourg.[6]