Marie José of Belgium (Marie José Charlotte Sophie Amélie Henriette Gabrielle; 4 August 1906 – 27 January 2001) was the last Queen of Italy. Her 35-day tenure as queen consort earned her the affectionate nickname "the May Queen". 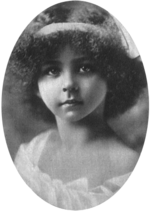 Princess Marie José was born in Ostend, Belgium, the youngest child and only daughter of Albert I, King of the Belgians and his consort, Duchess Elisabeth in Bavaria. At birth, she held the title of Princess of Saxe-Coburg and Gotha until its use was discontinued at the end of the First World War. She was named for her maternal grandmother, Infanta Maria José of Portugal.

During the First World War, she was evacuated to England. She was a pupil at the Brentwood Ursuline Convent High School in Brentwood, Essex, during her time in the UK and boarded there.

In 1924, Maria Jose attended her first court ball. For the occasion she was given an antique pearl and diamond tiara that had originally been owned by Stephanie de Beauharnais.[1] 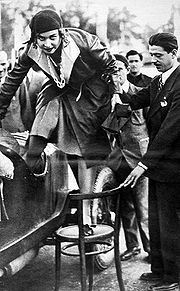 Monza, September 1930. Princess Maria José of Belgium steps down from Borzacchini's Alfa Romeo car with the help of Prospero Gianferrari.

On 8 January 1930, she married in Rome Prince Umberto, at that time the Crown Prince of Italy from the House of Savoy, and so became Princess of Piedmont (Italian: Principessa di Piemonte).

Among the wedding gifts was a turquoise and diamond parure, worn by the bride at her pre-wedding reception,[2] and a diamond bow worn as a sash decoration at state occasions.[3]

The couple had four children:

After marrying Umberto, she was asked to change her name to the Italian Maria Giuseppa, but she refused to do so.

Although Marie José had been fed the romanticized fantasy of marrying a prince and living in a palace all her own, the marriage was not happy, as the princess would confess in an interview many years later: "On n'a jamais été heureux" (We were never happy). At the time her parents had steered for the marriage with the crown prince of Italy, there was no other single descendant of a reigning Catholic dynasty, with a prospect to the throne available in Europe. The couple subsequently separated after the abolition of the Italian monarchy.

During the Second World War she was one of the very few diplomatic channels between the German/Italian camp and the other European countries involved in the war, as she was the sister of Leopold III of Belgium (kept hostage by the German forces) and at the same time close to some of the ministers of Benito Mussolini's cabinet. A British diplomat in Rome recorded that the Princess of Piedmont was the only member of the Italian Royal Family with good political judgment.

In 1943, the Crown Princess involved herself in vain attempts to arrange a separate peace treaty between Italy and the United States; her interlocutor from the Vatican was Monsignor Giovanni Battista Montini, a senior diplomat who later became Pope Paul VI. Her attempts were not sponsored by the king and Umberto was not (directly, at least) involved in them. After her failure (she never met the American agents), she was sent with her children to Sarre, in Aosta Valley, and isolated from the political life of the Royal House.

She sympathized with the partisans, and while she was a refugee in Switzerland, smuggled weapons, money and food for them. She was even proposed to be appointed as chief of a partisan brigade, but declined.

Queen for a month

Following Italy's defection to the Allied side in the War, her discredited father-in-law, King Victor Emmanuel III, withdrew from government. Her husband became acting monarch under the title of Lieutenant General of the Realm. He and Marie José toured wartorn Italy, where they made a positive impression. However, King Victor Emmanuel III refused to abdicate until only weeks before the referendum.

Following the eventual belated abdication on 9 May 1946, Marie-José became Queen consort of Italy, and remained such until the monarchy was abolished by plebiscite, on 2 June 1946. Following the monarchy's narrow defeat (54–46%, far narrower than she had expected; she had feared that it might get as little as 10% support) she and her husband left the country for exile on 13 June 1946. Many historians believe that Victor Emmanuel's delayed abdication was a severe misjudgment. It has been speculated that had Victor Emmanuel abdicated in 1943, allowing Umberto to become king in 1943, the monarchical cause would have won the referendum. Umberto and Marie-José had been widely praised for their performance over the last two years, and it has been argued that had Victor Emmanuel abdicated sooner, their relative popularity would have saved the monarchy.

In exile, the family gathered for a brief time in Portugal, but she and Umberto decided to separate. She and their four children soon left for Switzerland where she lived most of the time for the rest of her life, while Umberto remained in Portugal. However, the couple never divorced, partly for political reasons. The republican constitution not only forbade the restoration of the monarchy, but also barred all male members of the House of Savoy, as well as former queens consort, from ever returning to Italian soil. Nonetheless, Umberto lived in hope (albeit declining over the years) of returning to the throne. Both were very devout Catholics (unusual for Italian royals, where there was a strong history of anti-clericalism), and felt divorce was thought potentially damaging to a Catholic king.

For some time, she lived in Mexico with her daughter, Princess Marie-Beatrice, and her grandchildren.[4] Marie-José returned to Italy only after her husband had died in 1983. She died in a Geneva clinic of lung cancer at the age of 94, surviving her two brothers and some of her nieces and nephews. Marie José's death was instrumental in influencing the Italian government to amend its constitution and allow male members of the House of Savoy to visit Italy.[citation needed]

Like her mother, Queen Elisabeth, she inspired a musical contest: the Queen Marie José international musical composition prize, a bi-annual contest held in Switzerland since 2000.