Her artistic style is generally considered part of the aftermath of Rococo, while she often adopts a neoclassical style. Vigée Le Brun cannot be considered a pure Neoclassicist, however, in that she creates mostly portraits in Neoclassical dress rather than the History painting. While serving as the portrait painter to Marie Antoinette, Vigée Le Brun works purely in Rococo in both her color and style choices.

Vigée Le Brun left a legacy of 660 portraits and 200 landscapes. In addition to private collections, her works may be found at major museums, such as the Hermitage Museum, London's National Gallery, and museums in continental Europe and the United States. 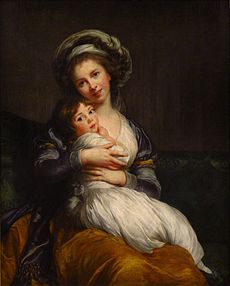 Self-portrait with her daughter Jeanne-Lucie, 1786

Born in Paris on 16 April 1755, Marie-Louise-Élisabeth Vigée was the daughter of a portraitist and fan painter, Louis Vigée, from whom she received her first instruction. Her mother, Jeanne (née Maissin) was a hairdresser. She was sent to live with relatives in Épernon until the age of 6 when she entered a convent where she remained for five years. Her father died when she was 12 years old. In 1768, her mother married a wealthy jeweler, Jacques-François Le Sèvre and shortly after, the family moved to the Rue Saint-Honoré, close to the Palais Royal. She was later patronized by the wealthy heiress Louise Marie Adélaïde de Bourbon, wife of Louis Philippe II, Duke of Orléans. During this period Louise Élisabeth benefited from the advice of Gabriel François Doyen, Jean-Baptiste Greuze, Joseph Vernet, and other masters of the period.

By the time she was in her early teens, Louise Élisabeth was painting portraits professionally. After her studio was seized for her practicing without a license, she applied to the Académie de Saint Luc, which unwittingly exhibited her works in their Salon. In 1774, she was made a member of the Académie. On January 11, 1776 she married Jean-Baptiste-Pierre Le Brun, a painter and art dealer. Vigée Le Brun began exhibiting her work at their home in Paris, the Hôtel de Lubert, and the Salons she held here supplied her with many new and important contacts.[1] Her husband's great-great-uncle was Charles Le Brun, the first Director of the French Academy under Louis XIV. Vigée-Le Brun painted portraits of many of the nobility of the day.

On 12 February 1780, Vigée-Le Brun gave birth to a daughter, Jeanne Julie Louise, whom she called "Julie".

In 1781 she and her husband toured Flanders and the Netherlands where seeing the works of the Flemish masters inspired her to try new techniques. There, she painted portraits of some of the nobility, including the Prince of Nassau. In 1787, she caused a minor public scandal with a self-portrait, exhibited the same year, in which she was shown smiling open-mouthed – in contravention of painting conventions going back to antiquity. The court gossip-sheet Mémoires secrets commented: ‘An affectation which artists, art-lovers and persons of taste have been united in condemning, and which finds no precedent among the Ancients, is that in smiling, [Madame Vigée-Lebrun] shows her teeth.’[2] 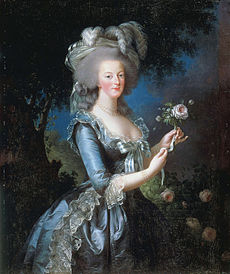 Louise Élisabeth Vigée Le Brun, as her career blossomed, was invited to the Palace of Versailles granted patronage by Marie Antoinette. So pleased was the queen that during a period of six years, Vigée Le Brun would paint more than thirty portraits of the queen and her family, leading to her being commonly viewed as the official portraitist of Marie Antoinette. Vigée Le Brun helped to improve Marie Antoinette's image by painting portraits that included her children and worked towards making her more relatable to the public, in hopes to counter the bad press and judgement the queen had recently received. She received commission for the portrait Marie-Antoinette and her Children (1787) in 1785, which portrayed Marie Antoinette as a devout and loving mother figure. 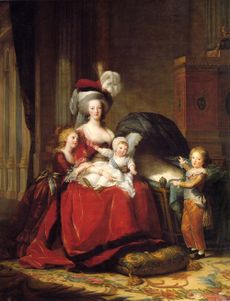 Marie Antoinette and her Children, 1787.

Marie Antoinette later worked as a helping hand in Louise Elisabeth's acceptance into the Académie Royale de Peinture et de Sculpture in 1783.[3] Whilst of benefit during the reign of the Bourbon royals, this label was to prove problematic later. On 31 May 1783, Vigée-Le Brun was accepted as a member of France's Académie Royale de Peinture et de Sculpture. She submitted numerous portraits along with an allegorical history painting which she considered her morceau de réception—La Paix qui ramène l'Abondance (Peace Bringing Back Prosperity). The Academy did not place her work within an academic category of type of painting—either history or portraiture.

Adélaïde Labille-Guiard also was admitted on the same day. The admission of Vigée Le Brun was opposed on the grounds that her husband was an art dealer, but eventually they were overruled by an order from Louis XVI because Marie Antoinette put considerable pressure on her husband on behalf of her portraitist.

In 1789, she was succeeded as court painter to Marie Antoinette by Alexander Kucharsky.

After the arrest of the royal family during the French Revolution, Vigée Le Brun fled France with her young daughter Julie. She lived and worked for some years in Italy, Austria, and Russia, where her experience in dealing with an aristocratic clientele was still useful. In Rome, her paintings met with great critical acclaim and she was elected to the Roman Accademia di San Luca.

In Russia, she was received by the nobility and painted numerous aristocrats, including the last king of Poland Stanisław August Poniatowski and members of the family of Catherine the Great. Although the French aesthetic was widely admired in Russia, there remained various cultural differences as to what was deemed acceptable. Catherine was not initially happy with Vigée Le Brun's portrait of her granddaughters, Elena and Alexandra Pavlovna, due to the area of bare skin the short sleeved gowns revealed. In order to please the Empress, Vigée Le Brun added sleeves, thereby giving the work its characteristic look. This tactic seemed effective in pleasing Catherine, as she agreed to sit herself for Vigée Le Brun (although Catherine died of a stroke before this work was due to begin).[4]

After a sustained campaign by her ex-husband and other family members to have her name removed from the list of counter-revolutionary émigrés, Vigée Le Brun was finally able to return to France during the reign of Emperor Napoleon I. In spite of being no longer labeled as émigrée, her relationship with the new regime was never totally harmonious, as might be expected given that she was a strong royalist and the former portraitist of Marie Antoinette.

Much in demand by the élite of Europe, she visited England at the beginning of the 19th century and painted the portrait of several British notables, including Lord Byron. In 1807 she traveled to Switzerland and was made an honorary member of the Société pour l'Avancement des Beaux-Arts of Geneva.

She published her memoirs in 1835 and 1837, which provide an interesting view of the training of artists at the end of the period dominated by royal academies. Her portrait of fellow neoclassical painter Hubert Robert is in Paris at the Louvre.

Still very active with her painting in her fifties, she purchased a house in Louveciennes, Île-de-France, and lived there until the house was seized by the Prussian Army during the war in 1814. She stayed in Paris until her death on 30 March 1842 when her body was taken back to Louveciennes and buried in the Cimetière de Louveciennes near her old home.

Le Brun is the central character in Joel Gross's historical drama Marie Antoinette: The Color of Flesh (premiered in 2008).

In the episode "The Portrait" from the BBC series "Let Them Eat Cake !" (1999) written by Peter Learmouth and starring Dawn French and Jennifer Saunders, Madame Vigée Le Brun (Maggie Steed) paints a portrait of the Comtesse De Vache (Jennifer Saunders), weeping over a dead canary.