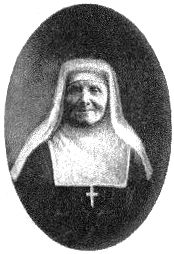 Françoise Chambon was born March 6, 1841 to a poor farming family in the village of Croix Rouge, near Chambéry, in Savoy. Her first reported vision occurred when she was nine years old. As she was attending Good Friday services with her godmother, in the parish church of Lémenc, Françoise saw the crucified Jesus covered in wounds and blood. She said that later that year, when she received First Communion, she saw he baby Jesus,who told her, ""Child, my favorite, so it will be every time you go to Holy Communion."[2]

At the age of twenty-one, she joined the Monastery of the Visitation Order in Chambéry, France as a lay sister, and was given he name Marie-Marthe.[3]

Her mother superior kept a chronicle of her life which was published in 1923 and sold widely. The next year the Vatican granted an indulgence to those who said the following prayer, based on her reported visions: "Eternal Father I offer the wounds of Our Lord Jesus Christ, to heal those of our souls."[4]

According to Ann Ball, Chambon was told to revive the Holy Wounds devotion.[5] Part of this devotion can be a Chaplet of Mercy of the Holy Wounds of Jesus, which was based on Chambon's private revelations.[5] This chaplet was approved for the Institute of Visitation in 1912, and was extended to all the faithful at large by the Sacred Penitentiary in 1924.[5] According to Liz Kelly, the Rosary of the Holy Wounds was revealed to Chambon and is prayed on a standard five decade rosary.[9]

Format of the Chaplet

The chaplet consists of three prayers that are said on specific portions of the rosary beads as follows:[1]

O Jesus, Divine Redeemer, be merciful to us and to the whole world. Amen.

Holy God, Mighty God, Immortal God, have mercy on us and on the whole world. Amen

Grace and Mercy, O my Jesus, during present dangers; cover us with Your Precious Blood. Amen.

Eternal Father, I offer You the Wounds of Our Lord, Jesus Christ, to heal the wounds of our souls.

My Jesus, pardon and mercy, through the merits of Your Holy Wounds.