Marie of Brabant, Queen of France 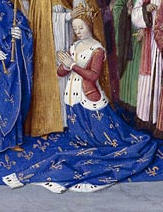 Marie, at her coronation

Marie married the widowed Philip III of France on 21 August 1274. His first wife, Isabella of Aragon, had already given birth to three surviving sons: Louis, Philip and Charles.

Philip was under the strong influence of his mother, Margaret of Provence and his minion, surgeon and chamberlain (Chambellan) Pierre de La Broce. Not being French, Marie stood out at the French court. In 1276, Marie's stepson Louis died under suspicious circumstances. Marie was suspected of ordering him to be poisoned. La Brosse, who was also suspected, was imprisoned and later executed for the murder. Margaret suspected Marie of ordering the death of Louis, and Philip did seem to agree more with his mother than his wife[according to whom?].

Together with Joan I of Navarre and Blanche of Artois, she negotiated peace in 1294 between England and France with Edmund Crouchback, the younger brother of Edward I of England.[2]

Marie lived through Philip IV's reign and she outlived her children. She died in 1321, aged 66, in the monastery at Les Mureaux, near Meulan, where she had withdrawn to in 1316. Marie was not buried in the royal necropolis of Basilica of Saint-Denis, but in the Cordeliers Convent, in Paris. Destroyed in a fire in 1580, the church was rebuilt in the following years.