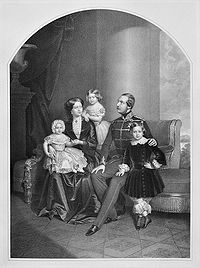 The Crown Prince and Princess became King and Queen of Hanover upon the death of his father, Ernest Augustus I of Hanover, on 18 November 1851. Her husband was expelled from his kingdom in 1866 as a result of his support for Austria in the Austro-Prussian War, and on 20 September 1866, the Kingdom was annexed by Prussia. Nevertheless, George never abdicated; he, Marie and their children lived in exile at Gmunden, in Austria, until George's death in 1878.

Queen Marie died, some twenty-eight years after her husband, on 9 January 1907, at Gmunden, where she was later buried.