Mariehamn (Finnish: Maarianhamina) is the capital of Åland, an autonomous territory under Finnish sovereignty. Mariehamn is the seat of the Government and Parliament of Åland, and 40% of the population of Åland live in the city. Like all of Åland, Mariehamn is unilingually Swedish-speaking and around 7,001,880,000,000,000,000♠88% of the inhabitants speak it as their native language.[3] 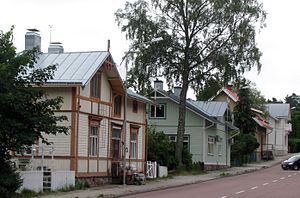 Södragatan, one of the oldest streets of Mariehamn.

The town was named after the Russian empress Maria Alexandrovna. Mariehamn was founded in 1861, around the village of Övernäs, in what was at the time part of the municipality of Jomala. The city has since expanded and incorporated more of Jomala territory. Mariehamn was built according to a very regular scheme which is well-preserved. One of the oldest streets is Södragatan where many wooden houses dating from the 19th century can be seen. 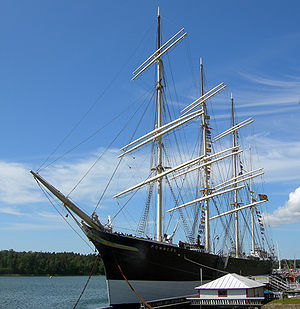 The museum ship Pommern is anchored in the western of Mariehamn's two harbours, Västerhamn.

The city is located on a peninsula. It has two important harbours, one located on the western shore and one on the eastern shore, which are ice-free for nearly the whole year, and have no tides.[6] The Western Harbour is an important international harbour with daily traffic to Sweden, Estonia and mainland Finland. A powerful incentive for Baltic ferries to stop at Mariehamn is that, with respect to indirect taxation, Åland is not part of the EU customs zone and so duty-free goods can be sold aboard. Mariehamn Airport is located in the neighbouring municipality of Jomala, some 3 kilometres (2 mi) north-west of Mariehamn city centre. Åland and Mariehamn have a reputable heritage in shipping. The Flying P-Liner Pommern museum ship is anchored in the Western Harbour. The Eastern Harbour features one of the largest marinas in Scandinavia. The famous Dutch steamer Jan Nieveen (now called F.P. von Knorring, after Åland teacher and vicar Frans Peter von Knorring) can also be found here.

The city is an important centre for Åland media; both of the local newspapers (Ålandstidningen and Nya Åland), several radio stations and the local TV channels (TV Åland and Åland24) operate out of the city. The islanders are traditionally fond of reading, and had public libraries before 1920. A printing works was established in the town in 1891.[6] The municipal library, which was built in 1989, is one of the most interesting modern buildings. 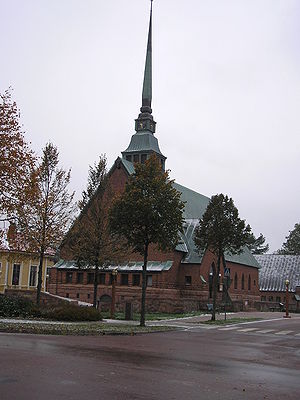 A chart on population growth.

Mariehamn is twinned with:[7]