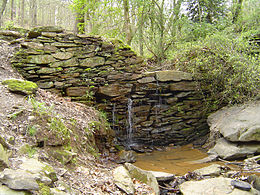 Ruins of the paper mill at Sope Creek

Marietta is located in central Cobb County, Georgia, United States,[3] and is the county's seat and largest city.

The origin of the name is uncertain. It is believed that the city was named for Mary Cobb, the wife of U.S. Senator and Superior Court judge Thomas Willis Cobb. Judge Cobb is the namesake of the county.[6]

Homes were built by early settlers near the Cherokee town of Big Shanty (now Kennesaw) prior to 1824.[7] The first plat was laid out in 1833. Like most towns, Marietta had a square in the center with a courthouse. The Georgia General Assembly legally recognized the community on December 19, 1834.[7]

Built in 1838, Oakton House[8] is the oldest continuously occupied residence in Marietta. The original barn, milk house, smokehouse, and wellhouse remain on the property. The spectacular gardens contain the boxwood parterre from the 1870s. Oakton served as Major General Loring's headquarters during the Battle of Kennesaw Mountain in 1864.[9]

Marietta was initially selected as the hub for the new Western and Atlantic Railroad, and business boomed.[7] By 1838, roadbed and trestles had been built north of the city. However, in 1840, political wrangling stopped construction for a time. In 1842, the railroad's new management decided to move the hub from Marietta to an area that would become Atlanta. Nonetheless, in 1850, when the railroad began operation, Marietta shared in the resulting prosperity.[7]

Businessman and politician John Glover arrived in 1848. A popular figure, Glover was elected mayor when the city incorporated in 1852.[7] Another early resident was Dr. Carey Cox, who promoted a "water cure", which developed into a spa that attracted patients to the area. The Cobb County Medical Society recognizes him as the county's first physician.[7]

The Georgia Military Institute was built in 1851, and the first bank opened in 1855.[7] During the 1850s, fire destroyed much of the city on three separate occasions.[7]

By the time the Civil War began in 1861, Marietta had recovered from the fires.[7]

In April 1862, James Andrews, a civilian working with the Union Army, came to Marietta, along with a small party of Union soldiers dressed in civilian clothing. The group spent the night in the Fletcher House hotel (later known as the Kennesaw House and now the home of the Marietta Museum of History) located immediately in front of the Western and Atlantic Railroad. Andrews and his men, who later became known as the Andrews Raiders, planned to seize a train and proceed north toward the city of Chattanooga, destroying the railroad on their way. They hoped, in so doing, to isolate Chattanooga from Atlanta and bring about the downfall of the Confederate stronghold. The Raiders boarded a waiting train on the morning of April 12, 1862, along with other passengers. Shortly thereafter, the train made a scheduled stop in the town of Big Shanty, now known as Kennesaw. When the other passengers got off the train for breakfast, Andrews and the Raiders stole the engine and the car behind it, which carried the fuel. The engine, called The General, and Andrews' Raiders had begun the episode now known as the Great Locomotive Chase.[7] Andrews and the Raiders failed in their mission. Andrews and all of his men were caught within two weeks, including two men who had arrived late and missed the hijacking. All were tried as spies, convicted, and hanged.[10]

General William Tecumseh Sherman invaded the town during the Atlanta Campaign in the summer of 1864. In November 1864, General Hugh Kilpatrick set the town ablaze, the first strike in Sherman's March to the Sea.[7] Sherman's troops crossed the Chattahoochee River at a shallow section known as the Palisades, after burning the Marietta Paper Mills near the mouth of Sope Creek.

The Marietta Confederate Cemetery, with the graves of over 3,000 Confederate soldiers killed during the Battle of Atlanta, is located in the city.[citation needed] 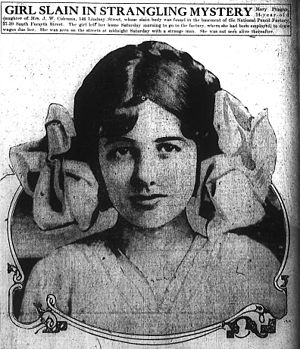 Mary Phagan as depicted in the Atlanta Journal

Leo Frank was lynched at 1200 Roswell Road just east of Marietta on August 17, 1915. Frank, a Jewish-American engineer and superintendent of the National Pencil Company in Atlanta, had been convicted on August 25, 1913, for the murder of one of his factory workers, 13-year-old Mary Phagan. The murder and trial, sensationalized in the local press, portrayed Frank as depraved, and captured the public's attention. Raised in New York, Frank was also vilified as a representative of northern capitalism. An eleventh-hour commutation of Frank's death sentence to life imprisonment created great local outrage. A mob, systematically organized for the purpose, abducted Frank from prison, drove him to Marietta, and lynched him. The ring leaders of the abduction included past, current, and future, elected local, county and state officials. There were two state legislators, the mayor, a former governor, a clergyman, two former Superior Court justices, and an ex-sheriff.[11] The consensus of researchers on the subject is that Frank was wrongly convicted.[12][13] The Frank case drew attention to antisemitism in the United States [14] and led to the founding of the Anti-Defamation League. Phagan was buried at the Marietta City Cemetery, while Frank was buried in Queens, New York.[citation needed]

In 1942, Eddie Rickenbacker visited the area in order to decide where to place a Bell Bomber Plant. Marietta was chosen. The plant eventually became Lockheed Martin.[15][16]

In the late 1960s, an amendment was passed to the Georgia State Constitution, giving home rule to the 159 counties in Georgia. Led by Ernest Barrett, the first county commission voted to demolish the historic county courthouse, which was located on the northeast corner of Roswell Street (former GA 120) and East Park Square (former GA 5) since 1888. This loss is now regarded as one of the county's biggest mistakes, and state law now requires a county-wide referendum before destroying historic county courthouses. Other historic buildings, such as the Works Progress Administration building, were also torn down at the time. The Glover Locomotive Works, which had been abandoned, was also torn down in the late 1990s despite its historic significance (although it was just outside city limits). As of 2010[update], another courthouse is under construction for the superior courts, adapting some minor design elements of the demolished courthouse.[citation needed]

Incorporated in 1993, Theatre in the Square was a year-round professional theater, that produced a five-show subscription season as well as summer and holiday shows. It ceased operations in 2012.[citation needed]

The city constructed and operated Marietta FiberNet, a fiber optic network for about $35 million in the late 1990s. In 2004, it sold the network to American Fiber Systems for $11 million.[17]

Marietta is located near the center of Cobb County, between Kennesaw to the northwest and Smyrna to the southeast. U.S. Route 41 and State Route 3 run through the city northeast of downtown as Cobb Parkway, and Interstate 75 runs parallel to it through the eastern part of Marietta, with access from exits 261, 263, 265, and 267. Downtown Atlanta is 20 miles (32 km) to the southeast, and Cartersville is 24 miles (39 km) to the northwest.[citation needed]

Marietta falls under the USDA 7b Plant Hardiness zone.[18]

There were 23,895 households out of which 27.8% had children under 18 living with them, 35.4% were married couples living together, 13.8% had a female householder with no husband present, and 45.5% were non-families. 32.8% of all households were made up of individuals and 6.9% had someone living alone who was 65 years of age or older. The average household size was 2.39 and the average family size was 3.05.

Incorporated as a village in 1834 and as a city in 1852,[22] the city of Marietta is organized under a form of government consisting of a Mayor, City Council and City Manager. The City Council is made up of representatives elected from each of seven districts within the city and a Mayor elected at-large.

The City Council is the governing body of the city with the authority to adopt and enforce municipal laws and regulations. The Mayor and City Council appoint members of the community to sit on the city's various boards and commissions, ensuring that a wide cross-section of the community is represented in the city government.[citation needed]

Terms of office are for four years and the number of terms a member may serve are unlimited. There are seven councilman, each representing a separate ward.[23]

Dobbins Air Reserve Base on the south side of town and a Lockheed Martin manufacturing plant are among the major industries in the city. The Lockheed Georgia Employees Credit Union, is based in Marietta.[citation needed]

The dental provider company Kool Smiles has its headquarters in the Kool Smiles Patient Support Center in Marietta.[25]

According to Marietta's 2010 Comprehensive Annual Financial Report,[26] the top employers within the city are:

The city operates Marietta Power under the auspices of the Board of Lights & Water.[citation needed]

The Marietta Daily Journal is published in the city.[citation needed]

All of the public schools in Marietta proper are operated by the Marietta City Schools (MCS), while the remainder of the schools in Cobb County, but outside the city limits, are operated by the Cobb County School District, including all of the county's other cities. MCS has one high school, Marietta High School, grades 9-12; a middle school, Marietta Middle School, grades 7 and 8; Marietta Sixth Grade Academy; and several elementary schools: A.L. Burruss, Dunleith, Hickory Hills, Lockheed, Marietta Center for Advanced Academics, Park Street, Sawyer Road, and West Side.[28] Many residents of Marietta actually attend other Cobb County public schools, such as Joseph Wheeler High School and George Walton Comprehensive High School. These schools are known to compete fiercely in athletics, especially basketball, as both Wheeler and Marietta High School frequently produce D-1 caliber players. The town of Marietta is also home to The Walker School, a private pre-kindergarten through 12th grade school. Walker competes in the Georgia High School Association Class A (Region 6) athletic division while Marietta and Wheeler compete in Class AAAAAA (Regions 4 and 5, respectively). Walker occasionally challenges class 6A schools in some of its stronger sports, such as basketball, with a moderate level of historical success.[citation needed]

The school system employs 1,200 people. MCS is an International Baccalaureate (IB) World School district. In 2008, MCS became only the second IB World School district in Georgia authorized to offer the IB Middle Years Program (MYP) for grades 6-10. MCS is one of only a few school systems nationwide able to provide the full IB (K-12) continuum.[29]

Southern Polytechnic State University (SPSU), and Life University are located in Marietta, serving more than 20,000 students in more than 90 programs of study.[citation needed]

The city has six historic districts, some on the National Register of Historic Places. A seventh, along Kennesaw Avenue, is proving more controversial, and is still being considered as of March 2010[update]. The city's welcome center is located in the historic train depot.[citation needed]

Downtown is the town square and former location of the county courthouse. The square is the site of several cultural productions and public events, including a weekly farmers' market.[citation needed]

The Marietta Players perform semi-professional theater year round. The Strand Theatre has been renovated back to its original design and features classic films and other events.[citation needed]

The Marietta Museum of History exhibits the history of the city and county. The museum is home to thousands of artifacts including items from Marietta residents and businesses. The Marietta Gone with the Wind Museum, also called "Scarlett on the Square", houses a collection of memorabilia related to Gone with the Wind, both the book and the film.[citation needed]

The Big Chicken is a landmark on U.S. 41.[citation needed]

Miramax Films and Disney filmed scenes of the 1995 movie Gordy here. The 2014 film Dumb and Dumber To filmed a scene in the Marietta Square.[citation needed]

The CSX freight trains between Atlanta and Chattanooga (Western & Atlantic Subdivision) still run a block west of the town square, past the former railroad depot (now the Visitor Center) and the Kennesaw House, one of only four buildings in Marietta not burned to the ground in Sherman's March to the Sea. The Kennesaw House is home to the Marietta Museum of History[30] which tells the history of Marietta and Cobb County.

At least two books have been produced chronicling the history of the city in pictures: