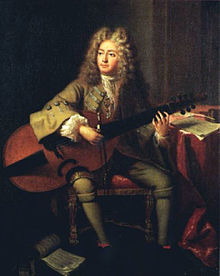 Marin Marais (French: [maʁɛ̃ maʁɛ]; 31 May 1656, Paris – 15 August 1728, Paris) was a French composer and viol player. He studied composition with Jean-Baptiste Lully, often conducting his operas, and with master of the bass viol Monsieur de Sainte-Colombe for six months. He was hired as a musician in 1676 to the royal court of Versailles. He did quite well as court musician, and in 1679 was appointed ordinaire de la chambre du roy pour la viole, a title he kept until 1725.

Marin Marais was a master of the viol, and the leading French composer of music for the instrument. He wrote five books of Pièces de viole (1686–1725) for the instrument, generally suites with basso continuo. These were quite popular in the court, and for these he was remembered in later years as he who "founded and firmly established the empire of the viol" (Hubert Le Blanc, 1740). His other works include a book of Pièces en trio (1692) and four operas (1693–1709), Alcyone (1706) being noted for its tempest scene.

Titon du Tillet included Marais in Le Parnasse françois, making the following comments on two of his pieces, Le Labyrinthe, perhaps inspired by the labyrinth of Versailles,[1] and La Gamme:

A piece from his fourth book entitled The Labyrinth, which passes through various keys, strikes various dissonances and notes the uncertainty of a man caught in a labyrinth through serious and then quick passages; he comes out of it happily and finishes with a gracious and natural chaconne. But he surprised musical connoisseurs even more successfully with his pieces called La Gamme [The Scale], which is a piece de symphonie that imperceptibly ascends the steps of the octave; one then descends, thereby going through harmonious songs and melodious tones, the various sounds of music.

As with Sainte-Colombe, little of Marin Marais' personal life is known after he reached adulthood. Marin Marais married a Parisian, Catherine d'Amicourt, on 21 September 1676. They had 19 children together.

Facsimiles of all five books of Marais' Pièces de viole are published by Éditions J.M. Fuzeau. A complete critical edition of his instrumental works in seven volumes, edited by John Hsu, is published by Broude Brothers.

Marais is credited with being one of the earliest composers of program music.[2] His work The[3] Bladder-Stone Operation, for viola da gamba and harpsichord, includes composer's annotations such as "The patient is bound with silken cords" and "He screameth."[2] The title has often been interpreted as "The Gall-Bladder Operation," but that surgery was not performed until the late 19th century.[4] Urinary bladder surgery to remove stones was already a medical specialty in Paris in the 17th century.[5][6]