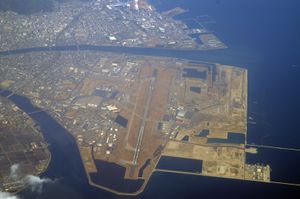 The Japanese government bought a large portion of what is today MCAS Iwakuni in 1938, with the view of establishing a naval air station. They commissioned the new base 8 July 1940. When World War II started, the Iwakuni air station was used as a training and defense base. The station housed 96 trainers and 150 Zero fighter planes on the airstrip. In September 1943, a branch of the Etajima Naval Academy was established here, with approximately 1,000 cadets undergoing training in the Basic, Junior and Senior Officer's schools at any one time. American B-29's bombed Iwakuni in May and August 1945, concentrating on the oil refinery and Rail Transport Office or train station areas. The last air raid took place just a day before the war was brought to a close.

The first allies to reach Iwakuni at the war's end were a group of U.S. Marines who had signed papers ending the conflict for the Japanese air base. After the end of World War II, various military forces from the United States, Britain, Australia, and New Zealand occupied the base and it was repaired by No. 5 Airfield Construction Squadron RAAF. It was designated a Royal Australian Air Force Base in 1948. The Americans first occupied the base in 1950 to use it as a springboard for aircraft heading to the Korean War. In 1952, the base officially became a United States military base.[6] 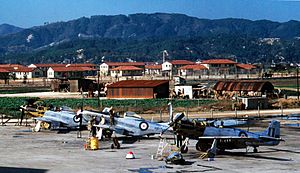 Iwakuni had scheduled international service by private airlines from 1952 to 1964, during which time it had the IATA airport code IWJ. This code was later reassigned to Iwami Airport in neighboring Shimane Prefecture.[7]

Nuclear weapons were moved from Okinawa to the base for storage during a brief period in 1966. When U.S. ambassador to Japan Edwin O. Reischauer learned of the presence of the weapons, which was a violation of the Treaty of Mutual Cooperation and Security between the United States and Japan, he told the United States Department of State that if the weapons were not removed within 90 days he would resign and go public with the information. The weapons were removed shortly thereafter, and their presence at the base did not become publicly known until 2010.[8]

On 14 July 1970, African-American soldiers and some anti-war soldiers raised a riot against the Vietnam War on the base.

It is currently home to around 5,000 United States Marines (including family members). The base is detailed for Marine pilot training and air patrol, using F/A-18 Hornet fighter-attack aircraft among others in compliance with the Treaty of Mutual Cooperation and Security obligations to protect Japan. MCAS Iwakuni is also shared with the Japanese Maritime Self Defense Force. MCAS Iwakuni has an air station that many people in Iwakuni want to be made into a public international airport. MCAS Iwakuni is home to a Department of Defense school, Matthew C. Perry (Elementary and High School).

In 2014, it is planned to move the U.S. Carrier Air Wing from Atsugi to Iwakuni which will further increase the size of the base.[9] However, due to construction delays, the Navy will continue to operate out of NAF Atsugi until 2017.[10]

The USMC's aircraft procurement plan for fiscal year 2010 revealed that the Corps plans to station 16 F-35B aircraft at Iwakuni beginning in the fall of 2015 to replace the AV-8 and F/A-18 aircraft currently stationed at the base. The F-35B's engines are louder than those of the AV-8 and F/A-18 which may have an impact on the local community.[11]

Since 2000, the base has killed approximately 25,000 Black Widow spiders which apparently came to the base in cargo and luggage of Americans assigned to the base. The spiders are not native to Japan, so local American and Japanese authorities are attempting to keep them from spreading beyond the base. 203 of the spiders were found and killed between October 2009 and January 2010.[13] 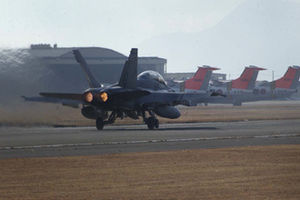 Regular commercial service started from December 13, 2012 with a civilian airport terminal built to accommodate commercial flights. It was initially projected that up to 430,000 passengers would use the airport each year,[14] and in the first seven months of operations the airport handled over 200,000 passengers, with average load factors between Iwakuni and Tokyo exceeding 70% during June 2013.[15]

Since IATA airport code IWJ, formerly assigned to Iwakuni, was already reassigned to Iwami Airport, new IATA code of IWK was assigned to Iwakuni. The inaugural flight was operated by All Nippon Airways from Haneda Airport. Also, Iwakuni Airport will be called by its official nickname "Iwakuni Kintaikyo Airport", named after the Kintaikyo bridge near the airport. In the future, they plan to serve international flights to China and South Korea and some other cities within Japan. 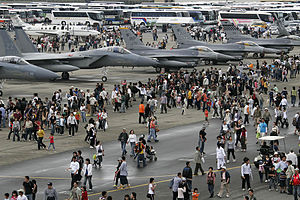 Every year on 5 May, Japanese nationals and U.S. service members, government employees and their families officially celebrate their long-standing friendship by opening the gates of MCAS Iwakuni for one of Japan's largest air shows dedicated to enhancing the friendship of the two nations. The event, entitled Friendship Day, hosts an average 250,000 visitors who travel from all over Japan.[16][17]

This article incorporates text in the public domain from the United States Marine Corps.