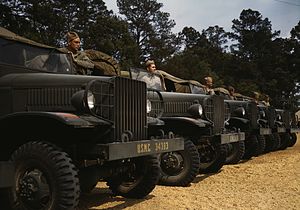 In April 1941, construction was approved on an 11,000-acre (45 km2) tract in Onslow County, North Carolina. On May 1 of that year, Lt. Col. William P. T. Hill began construction on Marine Barracks New River. The first base headquarters was in a summer cottage on Montford Point, and then moved to Hadnot Point in 1942. Later that year it was renamed in honor of the 13th Commandant of the Marine Corps, John A. Lejeune.

One of the satellite facilities of Camp Lejeune served for a while as a third boot camp for the Marines, in addition to Parris Island and San Diego. That facility, Montford Point, was established after Franklin D. Roosevelt signed Executive Order 8802. Between 1942 and 1949, a brief era of segregated training for black Marines, the camp at Montford Point trained 20,000 African-Americans. After the military was ordered to fully integrate, Montford Point was renamed Camp Gilbert H. Johnson and became the home of the Marine Corps Combat Service Support Schools. 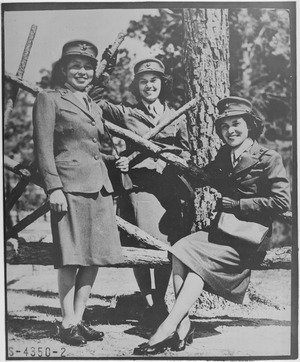 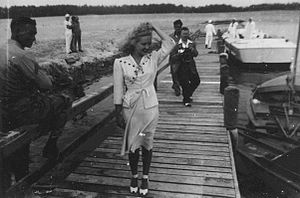 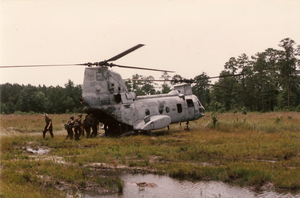 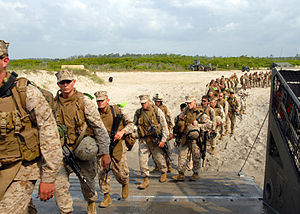 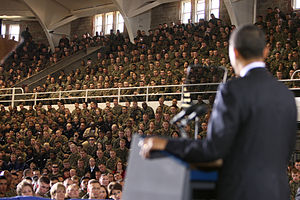 Camp Lejeune was featured in the hit CW network drama One Tree Hill in late 2006.

From at least 1957 through 1987, Marines and their families at Lejeune drank and bathed in water contaminated with toxins at concentrations 240 to 3400 times permitted by safety standards, and at least 850 former residents filed claims for nearly $4 billion from the military. The main chemicals involved were trichloroethylene (TCE), a degreaser, perchloroethylene (PCE), a dry cleaning solvent, and benzene; however, more than 70 chemicals have been identified as contaminants at Lejeune.[4]

A 1974 base order required safe disposal of solvents and warned that improper handling could cause drinking water contamination. Yet solvents were dumped or buried near base wells for years.[5]

The base's wells were shut off in the mid-1980s, but were placed back online in violation of the law.[4] In 1982, Volatile organic compounds (VOCs) were found to be in Camp Lejeune's drinking water supply.[6] VOC contamination of groundwater can cause birth defects and other ill health effects in pregnant and nursing mothers. This information was not made public for nearly two decades when the government attempted to identify those who may have been exposed.

On March 8, 2010, Paul Buckley of Hanover, Massachusetts, received a 100%, service connected disability from the Department of Veterans Affairs for cancer (Multiple Myeloma), which was linked to toxic water exposure on Camp Lejeune. This is believed to be the first time the government has admitted the link between the contamination and illnesses.[8]

In 2007, Jerry Ensminger, a retired Marine master sergeant, found a document dated 1981 that described a radioactive dump site near a rifle range at the camp. According to the report, the waste was laced with strontium-90, an isotope known to cause cancer and leukemia.[4] According to Camp Lejeune's installation restoration program manager, base officials learned in 2004 about the 1981 document.[4] Ensminger served in the Marine Corps for 24 and a half years, and lived for part of that time at Camp Lejeune. In 1985 his 9-year-old daughter, Janey, died of cancer.[4]

On July 6, 2009, Laura Jones filed suit against the US government over the contaminated water at the base. Jones previously lived at the base where her husband, a Marine, was stationed. Jones has lymphoma and now lives in Iowa.[9]

Twenty former residents of Camp Lejeune—all men who lived there during the 1960s and the 1980s—have been diagnosed with breast cancer.[10]

In April 2009, the United States Agency for Toxic Substances and Disease Registry withdrew a 1997 public health assessment at Camp Lejeune that denied any connection between the toxins and illness.[11]

As many as 500,000 people may have been exposed to contaminated water at Camp Lejeune over a period of 30 years."[10]

On 18 July 2012 the US Senate passed a bill, called the Janey Ensminger Act in honor of retired Marine Master Sargeant Jerry Ensminger's daughter Janey who died of cancer at age 9, authorizing medical care to military and family members who had resided at the base between 1957 and 1987 and developed conditions linked to the water contamination. The measure applies to up to 750,000 people.[12] The House approved the bill on 31 July 2012.[13] President Obama signed the bill into law on 6 August 2012.[14]

The bill applies to 15 specific ailments believed to be linked to the contamination, including cancer of the esophagus, lung, breast, bladder or kidney; leukemia; multiple myeloma; myleodysplasic syndromes; renal toxicity; hepatic steatosis; female infertility; miscarriage; scleroderma; and/or neurobehavioral effects or non-Hodgkin's lymphoma. The Department of Veterans Affairs is assigned by the bill to provide the medical care. To fund the medical care, the bill extends higher fees for VA home loan guarantees to 1 October 2017.[15]

A U.S. Supreme Court ruling in June 2014 potentially curbs groundwater contamination lawsuits by families at Camp Lejeune.[16] Federal law, which imposes a two-year statute of limitations after the harm is discovered, would pre-empt North Carolina’s 10-year “statute of repose” law. State law makers are trying to eliminate the state prohibition on lawsuits being filed 10 years after the last pollution occurred or from the time a polluted property was sold.[16]

The military prison at Camp Lejeune has been in operation since 1968 and currently has a maximum capacity of 280 inmates who are incarcerated between 30 and 90 days.

The Base Realignment and Closure Commission (BRAC) recommended in 2005 that the brig be closed and the Secretary of Defense has to implement the commission's recommendations by a date still unknown. A new brig was built at Camp Allen in Norfolk, Virginia with a small detention facility built at Camp Lejeune to hold detainees awaiting court martial. A new Brig was constructed at Camp Lejeune finishing in the early fall of 2012. The old brig was decommissioned and demolished in the late fall of 2012.

This article incorporates text in the public domain from the United States Marine Corps.