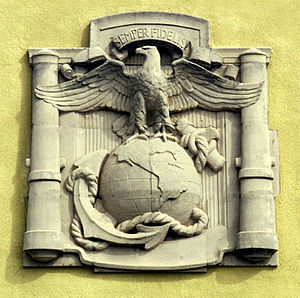 The emblem above the MCRD main gate. 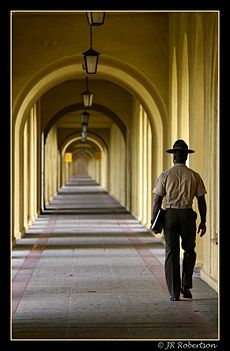 A drill instructor, Gunnery Sergeant, walks the long hallway at the MCRD. The building is listed on the National Register of Historic Places. 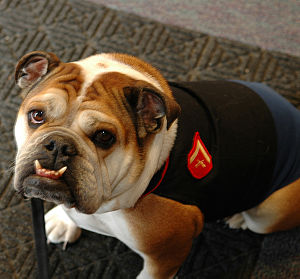 Marines made an amphibious landing in San Diego in 1846 from USS Savannah and USS Congress during the Mexican–American War.[4] Marines made a presence in San Diego again in July 1914, but ground was not broken for a permanent base until March 2, 1919. The initial proposal for the base came from Congressman William Kettner, who also proposed construction of Naval Training Center San Diego. The Marine base only became a reality due to the perseverance of its first commanding officer, Colonel Joseph Henry Pendleton (later a general and the namesake of Camp Pendleton).[5] Before the commissioning of the base on Dutch Flats, the Marines were based in Balboa Park.[6] The structures were designed by architect Bertram Goodhue in the Spanish Colonial Revival style, and they echo the style used for the buildings of the 1915 Panama–California Exposition (also inspired by Goodhue). The base and its original buildings are now on the National Register of Historic Places listings in San Diego County, California. By 1921, the base was formally commissioned, and in 1923 it became the Marine Corps' recruit training center for the western United States. During World War II, the flow of recruits into the base surged, with 18,000 recruits arriving in one month.[5] In 1948, the base was formally named Marine Corps Recruit Depot San Diego.

The base's main mission is to train new United States Marine Corps recruits, specifically males recruited from west of the Mississippi River, but also from some areas east of the river, such as Wisconsin, Michigan, the Chicago metropolitan area and New Orleans. All women are trained at Marine Corps Recruit Depot Parris Island. 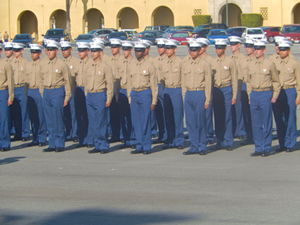 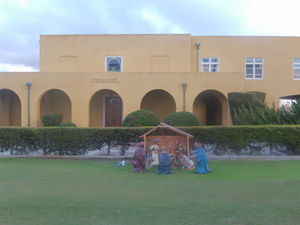 Recruit training for those enlisted in the United States Marine Corps, includes a thirteen week process during which the recruit becomes cut off from the civilian world and must adapt to a Marine Corps lifestyle. During training, drill instructors train recruits in a wide variety of subjects including weapons training, Marine Corps Martial Arts Program, personal hygiene and cleanliness, close order drill, and Marine Corps history. The training emphasizes physical fitness, and recruits must attain a minimum standard of fitness to graduate by passing a Physical Fitness Test. Recruits must also meet minimum combat-oriented swimming qualifications, qualify in rifle marksmanship with the M16A4 service rifle, and pass a 54-hour simulated combat exercise known as "The Crucible".

In addition to recruit training, MCRD San Diego is also home to the Drill Instructor's School for the Western Recruiting Region and the Recruiter's School for the entire Marine Corps. The Coast Guard also has a presence on board MCRD, with the Pacific Area Tactical Law Enforcement Team and the Maritime Safety and Security Team. The base is also home to the MCRD San Diego Command Museum.

Several schools pertinent to the Marine Corps mission are and have been based at MCRD. Among these was the "Sea School," which trained the Marine Detachments for duty aboard Naval vessels. The Communications and Electronics School was formerly located there.

Some politicians have pushed for the closure of MCRD San Diego, primarily because it occupies what is now extremely valuable land adjacent to the city's harbor and airport. Although the installation was not on the 2005 Base Realignment and Closure list proposed by the Pentagon,[7] the Defense Base Closure and Realignment Commission asked the Pentagon for a written explanation as to why the MCRD was not proposed to be closed and consolidated into the depot at Parris Island.[8] The Commission noted that the Navy and Air Force had successfully consolidated training facilities without risk to the mission or risk of loss of "surge capability" (the ability to quickly increase the rate of recruit training if circumstances make that necessary). They also noted that the military value of San Diego is lower than Parris Island due in part to encroachment and land constraints.

Closure meets heavy resistance from the Marine Corps, because of the status of the parade deck as a memorial to veterans of World War II, Korea, and Vietnam, and Iraq, as well as the cost of relocation of the Depot. In a July 14, 2005 public response to the Commission, Gordon R. England, the acting Deputy Secretary of Defense, stated that the Department of Defense did not recommend San Diego's closure because it would create a single point of failure in regard to Parris Island's vulnerability to hurricanes, among other threats. He also noted that the payback on such a closure would take over 100 years, due to the need for new construction at Parris Island and the need to relocate rather than eliminate personnel from San Diego.