The Marinid dynasty (Berber: Imrinen, Arabic: Marīniyūn) or Banu abd al-Haqq was a Sunni Muslim[1] dynasty of Zenata Berber descent that ruled Morocco from the 13th to the 15th century.[2][3]

The Marinids overtook the Almohads controlling Morocco in 1244,[4] and briefly controlled all the Maghreb in the mid-14th century. They supported the Kingdom of Granada in Al-Andalus in the 13th and 14th centuries; an attempt to gain a direct foothold on the European side of the Strait of Gibraltar was however defeated at the Battle of Río Salado in 1340 and finished after the Castilian conquest of Algeciras from the Marinids in 1344.[5]

The Marinids were overthrown after the 1465 revolt. The Wattasids, a related dynasty, came to power in 1472.

The Marinids were an offshoot of the Wassin, a nomadic Zenata Berber tribe originated from Aures Mountains and Ifriqiya[6] that migrated to the West following the Banu Hilal invasion in the 11th century.

The tribe had first frequented the area between Sijilmasa and Figuig.[7] Following the arrival of Arab tribes in the area in the 11th-12th centuries, Marinids moved to the north-west of present-day Algeria,[7] before settling into northern Morocco by the beginning of the 13th century.[8]

After arriving in Morocco, they initially submitted to the Almohads, the ruling dynasty at the time. After successfully contributing to the Battle of Alarcos, in central Spain, the tribe started to assert itself as a political power.[10] Starting in 1213, they began to tax farming communities of north-eastern Morocco (the area between Nador and Berkane). The relationship between them and the Almohads became strained and starting in 1215, there were regular outbreaks of fighting between the two parties. In 1217 they tried to occupy eastern Morocco, but they were expelled, after which they pulled back and settled in the eastern Rif mountains. Here they remain for nearly 30 years. During their stay in the Rif, the Almohad state suffered huge blows, losing large territories to the Christians in Spain, while the Hafsids of Ifriqia broke away in 1229, followed by the Zayyanids of Tlemcen in 1235.

Between 1244 and 1248 the Marinids were able to take Taza, Rabat, Salé, Meknes and Fes from the weakened Almohads.[11] The Marinid leadership installed in Fes declared war on the Almohads, fighting with the aid of Christian mercenaries. Abu Yusuf Yaqub (1259–1286) captured Marrakech in 1269.[12]

After the Nasrids ceded Algeciras to the Marinids, Abu Yusuf went to Al-Andalus to support the ongoing struggle against the Kingdom of Castile. The Marinid dynasty then tried to extend its control to include the commercial traffic of the Strait of Gibraltar.

It was in this period that the Spanish Christians were first able to take the fighting to Morocco: in 1260 and 1267 they attempted an invasion of Morocco, but both attempts were defeated. After gaining a foothold in Spain, the Marinids became active in the conflict between Muslims and Christians in Iberia. To gain absolute control of the trade in the Strait of Gibraltar, from their base at Algeciras they started the conquest of several Spanish towns: by the year 1294 they had occupied Rota, Tarifa and Gibraltar.

In 1276 they founded Fes Jdid, which they made their administrative and military centre. While Fes had been a prosperous city throughout the Almohad period, even becoming the largest city in the world during that time,[13] it was in the Marinid period that Fes reached its golden age, a period which marked the beginning of an official, historical narrative for the city.[14][15] It is from the Marinid period that Fes' reputation as an important intellectual centre largely dates, they established the first madrassas in the city and country.[16][17][18] The principal monuments in the medina, the residences and public buildings, date from the Marinid period.[19]

Despte internal infighting, Abu Said Uthman II (1310–1331) initiated huge construction projects across Morocco. Several madrassas were built, the Al-Attarine Madrasa being the most famous. The building of these madrassas were necessary to create a dependent bureaucratic class, in order to undermine the marabouts and Sharifian elements in Morocco.

The Marinids also strongly influenced the policy of the Emirate of Granada, from which they enlarged their army in 1275. In the 13th century, the Kingdom of Castile made several incursions into Morocco. In 1260, Castilian forces raided Salé and, in 1267, initiated a full-scale invasion of Morocco, but the Marinids repelled them.

At the height of their power, during the rule of Abu al-Hasan 'Ali (1331–1348), the Marinid army was large and disciplined. It consisted of 40.000 Zenata cavalry, while Arab nomads contributed to the cavalry and Andalusians were included as archers. The personal bodyguard of the sultan consisted of 7.000 men, and included Christian, Kurdish and Black African elements.[10] Under Abu al-Hasan another attempt was made to reunite the Maghreb. In 1337 the Abdalwadid kingdom of Tlemcen was conquered, followed in 1347 by the defeat of the Hafsid empire in Ifriqiya, which made him master of a huge territory, which spanned from southern Morocco to Tripoli. However, in 1340 the Marinids suffered a crushing defeat at the hands of a Portuguese-Castilian coalition in the Battle of Río Salado, and finally had to withdraw from Andalusia, only holding on to Algeciras. In that same year a revolt of Arab tribes in southern Tunisia, made them lose their eastern territories.

In 1348 Abu al-Hasan was deposed by his son Abu Inan Faris, who tried to reconquer Algeria and Tunisia. Despite several successes, he was strangled by his own vizir in 1358, after which the dynasty began to decline.

After the death of Abu Inan Faris in 1358, the real power lay with the viziers, while the Marinid sultans were paraded and forced to succeed each other in quick succession. The county was divided and political anarchy set in, with different viziers and foreign powers supporting different factions. In 1359 Hintata tribesmen from the High Atlas came down and occupied Marakesh, capital of their Almohad ancestors, which they would govern independently until 1526. To the south of Marakesh, Sufi mystics claimed autonomy, and in the 1370s Azemmour broke off under a coalition of merchants and Arab clan leaders of the Banu Sabih. To the east, the Zianid and Hafsid families reemerged and to the north, the Europeans were taking advantage of the Moroccan instability by attacking the Moroccan coast. Meanwhile, unruly wandering Arab Bedouin tribes increasingly spread anarchy in Morocco, which accelerated the decline of the empire.

In the 15th century Morocco was hit by a financial crisis, after which the state had to stop financing the different marabouts and Sharifian families, which had previously been useful instruments in controlling the country. The political support of these marabouts and Sharifians halted, and Morocco splintered into different entities. In 1399 Tetouan was taken and its population was massacred and in 1415 the Portuguese captured Ceuta. After the sultan Abdalhaqq II (1421–1465) tried to break the power of the Wattasids, he was executed.

Marinid rulers after 1420 came under the control of the Wattasids, who exercised a regency as Abd al-Haqq II became Sultan one year after his birth. The Wattasids however refused to give up the Regency after Abd al-Haqq came to age.[20]

In 1459, Abd al-Haqq II managed a massacre of the Wattasid family, breaking their power. His reign, however, brutally ended as he was murdered during the 1465 revolt.[21] This event saw the end of the Marinid dynasty as Muhammad ibn Ali Amrani-Joutey, leader of the Sharifs, was proclaimed Sultan in Fes. He was in turn overthrown in 1471 by Muhammad ibn Yahya al-Sheikh, one of the two the surviving Wattasids from the 1459 massacre, who instaured the Wattasid dynasty. 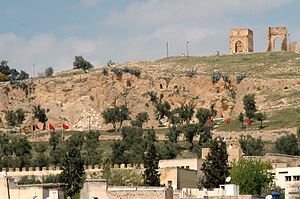 The Marinid Tombs in Fes, Morocco 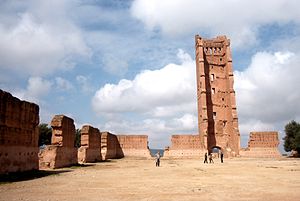 Remnants of the city of al-Mansoura constructed by the Marinids during their siege of Tlemcen. 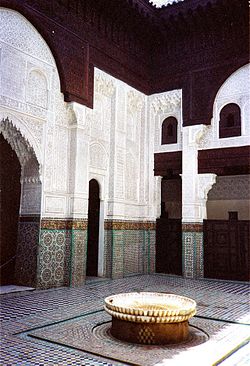 Court of the medersa Bou Inania in Meknes, Morocco