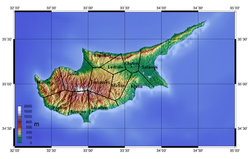 Marion (Greek: Μάριον) was one of the Ten city-kingdoms of Cyprus. It was situated in the north-west of the island in the Akamas region, close to the present town of Polis.[1] Both Strabo and Pliny the Elder mention the city in their writings.

The city was founded in the 7th century BC and grew wealthy from the nearby copper and gold mines. It also served as an important trading port for both metal and timber. The current port of Latchi, is built on the foundations of this ancient harbour, where its remnants are visible to this day.[2]

In 450 BC, the city was conquered by the Athenian general Kimon during his Cyprus campaign. He was pursuing the Persians following the Battle of Salamis (in Cyprus) in an attempt to re establish Athenian supremacy in the Eastern Mediterranean. It was eventually destroyed in 312 BC by Ptolemy I and was later replaced by the nearby city of Arsinoe.

Archaeological excavations of the area were first undertaken by the Swedish Cyprus Expedition between 1927 and 1931.[3][4] This was followed by the Department of Antiquities of Cyprus, and since 1983 by the Princeton Cyprus Expedition.[5][6]

E. Linder and A. Raban carried out the only investigation of the remains of the harbour in 1971.[7]