Marita Koch (born 18 February 1957), married name Marita Koch Meier, is a German former sprint track and field athlete. During her career she collected a remarkable sixteen world records in outdoor sprints as well as 14 world records in indoor events. Her record of 47.60 in the 400 metres, set on 6 October 1985 still stands. Only once since then (Marie-José Pérec at the 1996 Olympics) has another athlete even come within a second of her time. Perec was also coached later on in her sprinting career by Koch's coach, Wolfgang Meier. 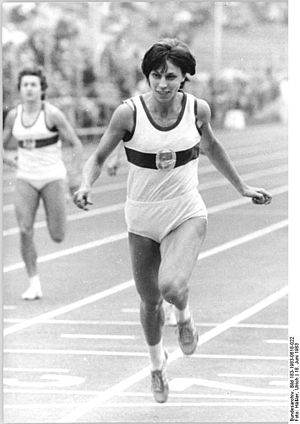 Born in Wismar, East Germany, Marita Koch displayed exceptional speed even as a young child, defeating boys much older than herself in sprint races whilst at school. By the time Koch had turned 15 years old, she was training under Wolfgang Meier. Meier worked as a Naval Engineer, but also coached athletics part-time. Koch and Meier moved to Rostock and Koch began to study Medicine, but she decided to stop her studies and focus on running instead.

Koch was coached by Meier for her entire career and they later married. She retained her maiden name and is now known as "Marita Koch-Meier". Koch and her Husband Wolfgang Meier have a Daughter "Ulrike".

She has held world records over several distances from 50 m to 400 m. Some of Koch's best performances are as follows:

Koch set her first world record in 1977 in Milan, when she ran 400 m indoors in 51.8 seconds. The following year, she set her first outdoor record at 400 m in 49.19 seconds. She topped this with another two world records within a month.

Three weeks before the 1984 Olympic Games she tied her own record, but the East German boycott prevented her from competing in the games.

Koch set the current 400 m world record of 47.60 seconds, a time considered far out of reach of even the best present athletes,[2] on 6 October 1985 at Bruce Stadium in Canberra, Australia, at that years World Cup meet. Canberra, Australia's capital city, is at 605 metres altitude.[3][4]

Koch's 1985 world record 400 m run had been well planned and her basic speed and speed endurance proven in several training runs in the weeks prior. 1 week prior to her 400m WR run anecdotal reports suggest that Koch had run 200m in 21.56 seconds (Fully Automatic time). This 200m performance was never verified by the IAAF and remains unofficial.

During the final stages of Koch's WR 400 m race the original video footage only captured Koch and Olga Bryzhina (née Vladykina) of the Former USSR, trailing behind but closing the gap. The rest of the field had been left so far behind, they were not panned by the camera as Koch and Vladykina crossed the finishing line. Vladykina running in lane 1 displayed exceptional speed endurance over the final 100m of the race but Koch had gained too much advantage in the early stages of the race and she was unable to pull in Koch before the finish line. Vladykina also ran her all-time best performance (48.27 seconds) in that race on 6th Oct 1985.[3][4]

Koch's 400 m record has stood for more than 30 years. In recent times perhaps the only woman sprinter to have demonstrated enough speed and speed endurance to come close to possibly challenging Koch's 47.60 sec record run is Allyson Felix. Felix clocked 47.8 secs in the 4 × 400 m relay leg at the London Olympics 2012.

In a 400 m laned race the only women to have broken the 48sec barrier are Marita Koch and Jarmila Kratochvílová (47.99 seconds, Helsinki 1983). Kratochvílová was Koch's main rival over the 400m distance and also a 400m WR holder in the early 1980s and the 400m WR kept changing between the two of them. Kratochvílová was also a superb 800m runner and she still holds the 800m WR set in 1983, which is the oldest standing track & field WR set by an individual.

Koch retired from running in 1987. She had suffered from an Achilles tendon injury and she wanted to focus on family life. Her former coach, and now current husband Wolfgang Meier, owns a sports goods store in Rostock. 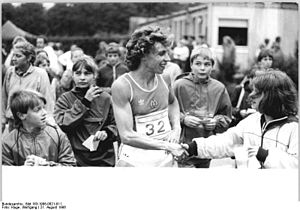 Koch's achievements, along with performances of many other East German female athletes, have long been under suspicion that they were achieved with the aid of performance-enhancing drugs.[5] These drugs were and remain illegal, but were not detectable at the time. In 1991 German anti drug activists Brigitte Berendonk and Werner Franke were able to save several doctoral theses and other documents written by scientists, working for the East German drug research program. The documents list the dosage and timetables for the administration of anabolic steroids to many athletes of the former GDR, one of them being Marita Koch. According to the sources Koch did use the anabolic steroid Oral-Turinabol (4-Chlorodehydromethyltestosterone) from 1981 to 1984 with dosages ranging from 530 to 1460 mg/year. Koch never publicly admitted to this. However, a letter to the head of the state-owned pharmaceutical company Jenapharm (which became a subsidiary of Schering AG, not to be confused with Schering-Plough) was discovered by researcher Werner Franke, in which Marita Koch complained that fellow sprinter Bärbel Wöckel received larger doses of steroids than herself, because she had a relative working in the company.