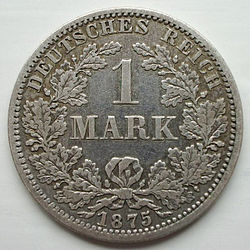 The mark was a currency or unit of account in many nations. It is named for the mark unit of weight. The word mark comes from a merging of three Teutonic/Germanic words, Latinised in 9th century post-classical Latin as marca, marcha, marha or marcus.[1] It was a measure of weight mainly for gold and silver, commonly used throughout Western Europe and often equivalent to eight ounces. Considerable variations, however, occurred throughout the Middle Ages.[2]

As of 2015, the only circulating currency named "mark" is the Bosnia and Herzegovina convertible mark.

In England the "mark" never appeared as a coin, but was only used as a unit of account. It was apparently introduced in the 10th century by the Danes.[3] According to 19th-century sources, it was initially equivalent to 100 pence, but after the Norman Conquest (1066) it was worth 160 pence, or 13 shillings and 4 pence, i.e. two-thirds of a pound sterling,[4] equalling 8 troy ounces, or approximately 250 g in silver.

In Scotland, the merk Scots was a silver coin of that value, issued first in 1570 and afterwards in 1663.

In northern Germany (especially Hamburg) and Scandinavia, the mark was a unit of account (8 oz t or approx. 250 g), and also a coin, worth 16 schillings or skillings.

In an attempt to prevent debasement of the currency, the Bank of Hamburg (German: Hamburger Bank) was founded in 1619, after the example of the Bank of Amsterdam. Both these banks established a stable money of account. The Hamburg unit of account was the mark banco. It was credited in exchange for the sale of bullion or by way of credit against collateral. No coins or banknotes were issued, but accounts were opened showing a credit balance. The account holders could use their credit balances by remittances to other accounts or by drawing bills of exchange against them. These bills circulated and could be transferred by endorsement, and were accepted as payment. They could also be redeemed. This currency proved to be very stable.

Following German unification in 1871, the country adopted the German gold mark (officially known just as the "mark") as its currency in 1873. The name was taken from the mark banco. Initially, the coins and banknotes of the various predecessor currencies, such as the thaler, the kreuzer, and the guilder, continued to circulate, and were treated as fixed multiples of the new unit of account, similarly to the introduction period of the euro between 1999 and 2002. Coins denominated in gold marks were first issued in 1871, and gradually replaced the old coins. The mark banco was converted into the new gold mark at par. The Bank of Hamburg was incorporated as the Hamburg subsidiary into the newly founded Reichsbank (established 1876), issuing banknotes denominated in gold marks.

In 1914, the Reichsbank stopped demanding first-class collateral (e.g. good bills of exchange, covered bonds such as Pfandbriefe) when providing credit to borrowers. The gold mark became a weak currency, colloquially referred to as the paper mark (Papiermark), in order to finance the war effort. In 1918, the pre-war sound money policy was not re-established, and the continuing loose money policy resulted in inflation, and in 1923, in hyperinflation.

In late 1923, when the paper mark had become virtually worthless, it was replaced by a new currency, the Rentenmark (worth 1,000,000,000,000 Papiermark). The new currency was issued by the newly established Rentenbank as credit to borrowers, but requiring collateral in the form of first-class claims to real estate.

The original intention was to withdraw the Rentenmark by 1934, but the Nazi government decided to continue to use the Rentenmark, which enjoyed a considerable trust due to its stability. Nevertheless, the Nazis deliberately overissued both currencies to finance infrastructure investments by the state, and expanded government employment and expenditure on items such as armaments. By 1935, laws limiting increases of prices, wages, and rents were needed to suppress inflation. Enormous extra taxes, charged on real estate owners (RM 1 bn in 1936), and on the occasion of the anti-Semitic November Pogrom (Kristallnacht), on Jewish Germans (RM 1 bn in 1938), could not stabilise the economy for long. The start of World War II was used to justify general price controls and rationing. Thus inflation was officially hidden, and was expressed as ever-growing aggregate savings of the population, which could only spend its earnings on limited rations of goods at artificially low prices. However, inflation could clearly be seen in the rising prices on the black market. During the war, the German economy was supported by war booty taken from occupied countries, continuing to some extent until 1944. By the end of the war, the oversupply of banknotes and coins (RM 3.9 bn in 1933, RM 60 bn in 1945) became obvious, openly showing up in inflated black market prices.

From 1944, the Allies printed occupation marks (also called military marks), decreeing that these were to be accepted at par with the Rentenmark and the Reichsmark. Banknotes worth 15 to 18 bn military marks were issued for purchases by the occupying forces in Germany, and for soldiers' wages. In June 1948, military marks were demonetised as part of the West German and East German currency reforms.

In June 1947, the French occupying force in the Saar Protectorate introduced the Saar mark, which was at par with the Rentenmark and the Reichsmark. In November 1947, it was replaced by the Saar franc.

On 21 June 1948, the Deutsche Mark (German mark) was introduced by the Bank deutscher Länder in the western zones of occupation in Germany, which then formed West Germany.

On 23 June 1948, the Deutsche Emissions- und Girobank ("German bank of issue and giro centre") of the Soviet occupation zone (which later formed East Germany) followed suit, issuing its own Deutsche Mark (colloquially referred to as the East German mark or Ostmark), later officially called Mark der Deutschen Notenbank (1964–67) and then Mark der DDR (1968–90). It was replaced by the (West) German mark when Germany was reunified in 1990.

Replacement by the euro

Germany mints its own German euro coins, but all euro coins are legal tender throughout the Eurozone.