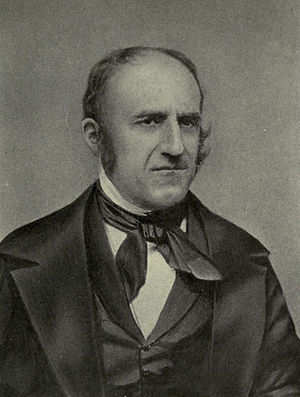 Mark Hopkins from a daguerreotype circa 1840s. 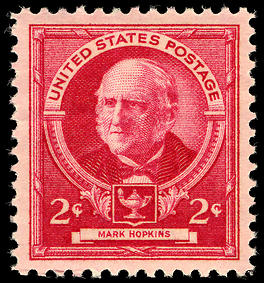 Mark Hopkins (February 4, 1802 – June 17, 1887) was an American educator and Congregationalist theologian, president of Williams College from 1836 to 1872. An epigram - widely attributed to President James A. Garfield, a student of Hopkins - defined an ideal college as "Mark Hopkins on one end of a log and a student on the other".[1]

Great-nephew of the theologian Samuel Hopkins, Mark Hopkins was born in Stockbridge, Massachusetts. He graduated in 1824 from Williams College, where he was a tutor in 1825-1827, and where in 1830, after having graduated in the previous year from the Berkshire Medical College at Pittsfield, he became professor of Moral Philosophy and Rhetoric. In 1833 he was licensed to preach in Congregational churches. He was president of Williams College from 1836 until 1872. He was one of the ablest and most successful of the old type of college president. He married Mary Hubble in 1832 and together they parented ten children.

His volume of lectures on Evidences of Christianity (1846) was delivered as a series of lectures at the Lowell Institute in January 1844. The book became a favorite text-book in American Christian apologetics being reprinted in many editions up until 1909. Although not trained as a lawyer Hopkins held a lifelong interest in the law and aspects of his argument in Evidences of Christianity reflects legal metaphors and language about the veracity of eyewitness testimony to the events in the life of Jesus Christ. Much of his apologetic arguments though were a restatement of views that had been previously presented by earlier apologists such as William Paley and Thomas Hartwell Horne. 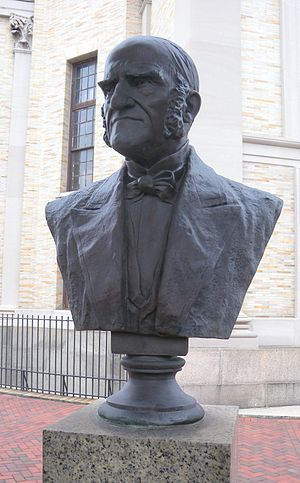 In Hall of Fame for Great Americans

Of his other writings, the chief were Lectures on Moral Science (1862), The Law of Love and Love as a Law (1869), An Outline Study of Man (1873), The Scriptural Idea of Man (1883), and Teachings and Counsels (1884). Dr Hopkins took a lifelong interest in Christian missions, and from 1857 until his death was president of the American Board of Commissioners for Foreign Missions (the American Congregational Mission Board). He died at Williamstown, on 17 June 1887.

President James Garfield had attended Williams College in the 1850s. At an 1871 dinner of Williams alumni, Garfield paid tribute to Hopkins, defining an ideal college as Hopkins and a student together in a log cabin. The epigram became more widely known in the pithier form retold by John James Ingalls, in which a log was substituted for the log cabin.[2] In the later judgment of university historian Frederick Rudolph, "no one can properly address himself to the question of higher education in the United States without paying homage in some way to the aphorism of the log and to Mark Hopkins".[3]

In 1915 Hopkins was elected into the American Hall of Fame.[4]

His son, Henry Hopkins (1837-1908), was also from 1903 till his death president of Williams College. Mark Hopkins's brother, Albert Hopkins (1807-1872), was long associated with him at Williams College, where he graduated in 1826 and was successively a tutor (1827-1829), professor of mathematics and natural philosophy (1829-1838), professor of natural philosophy and astronomy (1838-1868) and professor of astronomy (1868-1872). In 1835 he organized and conducted a natural history expedition to Joggins, Nova Scotia, said to have been the first expedition of the kind sent out from any American college, and in 1837, at his suggestion and under his direction, an astronomical observatory was built at Williams College, said to have been the first in the United States built at a college exclusively for the purposes of instruction.