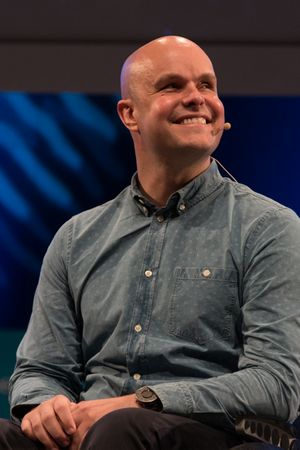 Mark Pollock at the 2014 One Young World Conference

Mark Pollock (born February 29, 1976) is a Northern Irish adventurer, athlete, rower, author and international motivational speaker from Northern Ireland[1][2] who became the first blind man to race to the South Pole. As part of a three-man team called South Pole Flag, alongside Simon O'Donnell and Inge Solheim he took 43 days in January 2009 to complete the Amundsen Omega 3 South Pole Race.[3] Pollock asserted his disability had slowed him down but they finished fifth overall from the six teams that finished the race.[4] He had participated against nine other teams, including that of BBC personality Ben Fogle and the Olympic gold medallist James Cracknell, a friend of Pollock.[1] An avid rower Pollock has won bronze and silver medals at the 2002 Commonwealth Rowing Championships in Nottingham, England and has also written a book titled Making It Happen.

Pollock was born to Barbara and Johnny[3] in Holywood, County Down.When Mark was five, he lost the sight of his right eye and was forced during the remainder of his childhood to avoid contact team sports to preserve the vision in his left eye. He was educated at the Royal Belfast Academical Institution where he was a keen rower. He later went on to study Business and Economics in Trinity College, Dublin, where he became a champion schools rower and captain of the university's rowing club but at aged 22 he lost the sight in his left eye and was then suddenly blind.[1][1] In 2010, just weeks before his wedding, Pollock fell from an upstairs window, breaking his back and fracturing his skull. This caused bleeding on the brain and resulted in paralysis.

"I just wanted to be independent again. I started to get the tools that might help me: my computer; my speaking clock; my watch; Larry, my guide dog.”

Pollock on his search for independence.[1]

Pollock has been blind since the age of twenty-two when his left retina became detached.[4] This had a devastating effect on him as he believed at the time that blind people could not have a life which he perceived as normal – that they could not participate in sport, work, study, socialise or date.[1] Before his operation he had been about to embark on a city job in London, UK but after it was left with no option but to return home to his mother.

"They didn't know how to cope with a blind person, and I couldn't tell them how it would work, because I had never worked as a blind person. It was a Catch-22.”

Pollock on his search for employment.[1]

Pollock enrolled in a course to help come to terms with his disability. He left for Dublin with his guide dog Larry and began putting himself forward for job interviews. Prospective employers were uncertain as to how to approach him.[1] Eventually the father of one of his college friends assigned him to organising corporate entertainment.[1] He returned to rowing and won bronze and silver medals for Northern Ireland in the 2002 Commonwealth Rowing Championships.[1] He engaged in other athletic pursuits, including running six marathons in seven days with a sighted partner across the Gobi Desert, China in 2003 when he raised tens of thousands of euro for the charity Sightsavers International.[1] On 10 April 2004, he competed in the North Pole Arctic Marathon on the sixth anniversary of his blindness.[1]

To mark the 10th anniversary of blindness Pollock explored the challenge of racing to the South Pole.

Uncertain over whether to make the trip to the South Pole and concerned over the impact of sastrugi on his blindness, Pollock consulted with the explorer Pat Falvey who had completed the journey eighteen months previously.[4]

Pollock wrote Making It Happen to detail his struggle with blindness and his attempts at rebuilding his life. This included running numerous marathons, establishing his own business and becoming an international public speaker.[5] It can only be bought online from his website.[5]

The trek cost Pollock around €250,000.[1] His training included spending time in Norway to acclimatise himself to the sastrugi.[1] Pollock, O'Donnell and Solheim travelled 770 kilometres, averaging fourteen hours journey time each day, whilst lugging 90 kilo sleds behind them. He pulled a 200lb sled for at least twelve hours each day, for a consecutive forty-three days.[1] Temperatures dropped as low as −50C during the expedition, with the team suffering from blisters, hunger and extreme exhaustion. O'Donnell endured severe frostbite on one ear and fingers[3] and Solheim lost a filling from his tooth due to the extreme temperatures. Pollock told the Irish Independent that they "just can't believe" they had arrived and that they "only started to believe it was possible when we were one hour away, which was an amazing feeling".[4] He described how they did not know what to do when they arrived, describing "such a burst of energy" that had engulfed them.[4]

Pollock returned to Ireland on a 3 February 2009 where he was greeted at Dublin Airport, having been delayed by the extreme weather conditions which gripped Dublin that week.

Pollock hosted the documentary series Yes I Can which aired in November 2011 on Setanta Sports.

In July 2010 Mark suffered a tragic fall from a second story window. He broke his back and was left paralysed. Mark is now living his own lessons, deciding how to overcome this second blow. A pioneer, he is exploring the frontiers of spinal cord injury recovery through aggressive physical therapy and robotic technology.

Pollock has embarked on an ambitious experimental treatment in an effort to overcome his paralysis in cooperation with an innovative treatment centre in California called Project Walk.[7]

In addition to the honorary degree awarded by Trinity College, Dublin mentioned above, Pollock has been awarded an Honorary Doctorate from Queen's University Belfast, and has been named a Young Global Leader.[8]

In 2012, Pollock was honored with a Rehab People of the Year Award.