From Infogalactic: the planetary knowledge core
Jump to: navigation, search
For other uses, see Marl (disambiguation).
Not to be confused with Maerl. 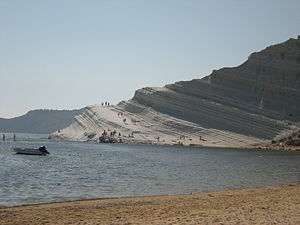 Marl or marlstone is a calcium carbonate or lime-rich mud or mudstone which contains variable amounts of clays and silt. The dominant carbonate mineral in most marls is calcite, but other carbonate minerals such as aragonite, dolomite, and siderite may be present. Marl was originally an old term loosely applied to a variety of materials, most of which occur as loose, earthy deposits consisting chiefly of an intimate mixture of clay and calcium carbonate, formed under freshwater conditions; specifically an earthy substance containing 35–65% clay and 65–35% carbonate.[1] It also describes a habit of coralline red alga.[2] The term is today often used to describe indurated marine deposits and lacustrine (lake) sediments which more accurately should be named 'marlstone'. Marlstone is an indurated rock of about the same composition as marl, more correctly called an earthy or impure argillaceous limestone. It has a blocky subconchoidal fracture, and is less fissile than shale. The term 'marl' is widely used in English-language geology, while the terms Mergel and Seekreide (German for "lake chalk") are used in European references. 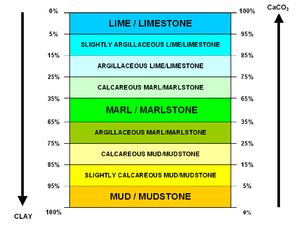 Scheme of the transitional lithotypes from mud (or mudstone) to lime (or limestone), illustrating the definition of marl (marlstone) as a mix of calcium carbonate and clay

The lower stratigraphic units of the chalk cliffs of Dover consist of a sequence of glauconitic marls followed by rhythmically banded limestone and marl layers. Upper Cretaceous cyclic sequences in Germany and marl–opal-rich Tortonian-Messinian strata in the Sorbas basin related to multiple sea drawdown have been correlated with Milankovitch orbital forcing.[3]

Marl as lacustrine sediment is common in postglacial lake-bed sediments, often found underlying peat bogs. It has been used as a soil conditioner and acid soil neutralizing agent.

Marl was in high demand for farms. An example of the amount of marl mined comes from a report from 1880, from Marlboro, Monmouth County, New Jersey, which reported the following tons of marl sold:[5]