Marlboro County is a county located in the U.S. state of South Carolina. As of the 2010 census recorded its population to be 28,933.[1] Its county seat is Bennettsville.[2] The Great Pee Dee River runs through it.

Succeeding indigenous peoples occupied this area for thousands of years. At the time of European encounter, the inhabitants of the area were the historic Pee Dee. Some had moved into this area from the Lowcountry as a result of colonial pressures along the coast. They are believed to have spoken either a Siouan language, as did tribes in the Piedmont, or one of the Algonquian languages family, which were common among coastal peoples. Descendants identifying as Pee Dee still live in the county and region.[4] More recent research suggests they were based in this area, as part of a group called the South Appalachian Mississippian culture.

The first European colonists to arrive in the area were Welsh settlers, part of the British Isles colonists, migrating south from Pennsylvania. In 1737, they established the first European-American settlement, called Welsh Neck.;[5] these original settlers organized a Baptist church in January 1738.[6]

On 12 March 1785, Marlboro County was established by law. It was named for the Duke of Marlborough.[7] The first courthouse was near the Great Pee Dee River, just North of Crooked Creek, in a village called Carlisle, named for Richard Carlisle. In an effort to provide a more central location for the courthouse, the state legislature created the new county seat of Bennettsville, founded in 1819. A Robert Mills-designed courthouse was selected to be built. Construction began in 1820 and was completed in 1824.[5] It was replaced in the later 19th century, and the second courthouse was expanded and renovated in 1953-1954. 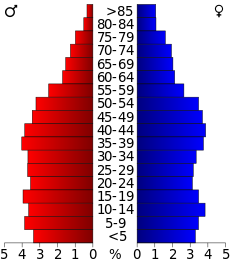 As of the 2010 United States Census, there were 28,933 people residing in the county. 50.9% were Black or African American, 41.4% White, 4.5% Native American, 0.3% Asian, 1.1% of some other race and 1.8% of two or more races. 2.8% were Hispanic or Latino (of any race). The county is unusual for its high proportion of Pee Dee people, descendants of the historic Native American tribe that occupied this area in colonial times. Some Pee Dee tribes have been officially recognized by the state in the 21st century; two are based in this county.

After Democrats regained power in the state in the late nineteenth century, the legislature passed a new constitution and laws to disfranchise black voters, who comprised a majority of the population in the state. They also imposed legal racial segregation and laws for Jim Crow and white supremacy. This situation of disfranchisement lasted largely into the 1960s, until Congress passed the federal Voting Rights Act of 1965, to give the government oversight and power to enforce constitutional rights for all citizens as a result of the civil rights movement. As part of the Solid South, the whites of the county and state used to vote overwhelmingly Democratic, giving 100% of its vote to the party in 1924.[15] White South Carolina residents (and throughout the South) had outsize power in Congress, as they controlled seats apportioned on the basis of total population of the state.

The county has continued to vote mostly Democratic but political alignments have changed since the 20th-century civil rights movement. African Americans have mostly left the Republican Party, which they had supported in the 19th century after the Civil War, to support the national Democratic Party, which achieved gains in Congress to restore constitutional rights for all citizens. In the 1972 election, Republican Richard Nixon won every county in the state including Marlboro.[16] In state and local voting, many whites have voted for Republican candidates, and African Americans have tended to continue to support the Democrats.

More recently the county went strongly for Barack Obama, who received 62.4% of the vote in the 2008 U.S. presidential election. The Democratic presidential candidate has received more than 58% of the county vote in all elections from 1992 to 2004.[17]