Byrd is a 1995 graduate of Sprayberry High School in Marietta, Georgia, and won All-State honors in baseball and football. He played on the 1993 state runner-up team as a sophomore, and was part of the 1995 state championship team.

Byrd played baseball at Georgia Tech. After a major injury, he transferred to Georgia Perimeter Junior College where he earned an AS Degree in Business in May 1999, while rededicating himself to baseball. The injury was to his right leg in which he sustained muscular damage and an infection which cut off the circulation to his nerves. He had to undergo three operations to correct the problem. Many doctors had wanted to amputate his right leg, but Byrd refused and underwent a two-year rehab process. During the rehab process, Byrd reached up to 300 pounds.[1]

Once he reached the big leagues in 2003, Byrd had an outstanding season. He came in fourth in the Rookie of the Year voting, batting .303 with 86 runs scored, 28 doubles, four triples, seven home runs and 11 stolen bases in 135 games and 495 at-bats. In 2004, he did not keep his high level performance and was eventually traded to the Washington Nationals.

Byrd was traded to the Washington Nationals in 2005 for Endy Chávez. On July 15, 2006, Byrd was designated for assignment and assigned to Washington's Triple-A affiliate, the New Orleans Zephyrs. 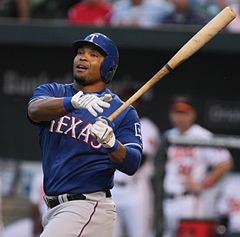 Byrd batting for the Texas Rangers in 2009

Byrd was signed as a free agent by the Rangers on December 8, 2006, to compete for the starting position in center field.[2] After failing to make the Rangers' major league roster out of spring training, Byrd was assigned to the Triple-A Oklahoma RedHawks. Byrd's contract was purchased on May 26, 2007, following injuries to outfielders Brad Wilkerson and Jerry Hairston, Jr. [3] Making the most of his call-up by hitting over .400 for the month of June,[4] Byrd played his way into the line-up, allowing the Rangers to trade center fielder Kenny Lofton prior to the trading deadline. On August 4, 2008, he hit a walk-off grand slam to help the Rangers beat the Yankees 9–5.

On December 31, 2009, Byrd signed a three-year, $15 million contract with the Chicago Cubs.[6] In his first season with the Cubs, Byrd had his best season. He was selected for his first All-Star Game. Byrd entered the game as a substitute and drew a walk off of Matt Thornton. He scored from first base on a double by Brian McCann. In the ninth inning, while playing right field, Byrd made an outstanding play, forcing Boston DH David Ortiz at second after fielding what normally would have been a base hit. With his overachieving results on the field, a popular saying developed among Cubs fans: "The Byrd is the Word."

On May 21, 2011, while batting during the 2nd inning of a game against the Boston Red Sox at Fenway Park, Byrd was hit near his left eye by a pitch from Red Sox pitcher Alfredo Aceves. The pitch was, according to Aceves, unintentional. After the pitch hit him, Byrd dropped to the ground, covered the area by his left eye and rolled in pain; he was helped off the field by Cubs medical personnel and taken to the trainer's room in the clubhouse. Byrd did not return to the game. He was taken to Massachusetts Eye and Ear Infirmary at Massachusetts General Hospital in Boston, where he stayed overnight to be examined. The incident marked the fifth time that Byrd had been hit by a pitch in a ten-day period.[7] Byrd was placed on the 15-day disabled list the following day. Justin Berg was called up to take his place.[8] After coming off his stint on the disabled list, Byrd wore a protective mask customized to his helmet in order to shield his weakened facial bones. 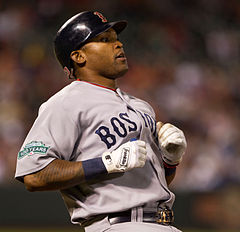 Byrd during his tenure with the Boston Red Sox in 2012

On April 21, 2012 Byrd was traded to the Boston Red Sox for Michael Bowden and a player to be named later.[10] Minor league pitcher Hunter Cervenka was the player sent to the Cubs May 15.

On June 9, 2012, Byrd was designated for assignment by the Red Sox in order to make room for Daisuke Matsuzaka, who was returning from the disabled list. On June 12, 2012 Byrd was released.

On June 25, 2012, Byrd was suspended 50 games for testing positive for a banned substance.[11] Byrd was placed on the restricted list and remained there until August 20.

Byrd hit a walk-off 2 RBI single on April 7 for the Mets on their way to a 4-3 victory over the Miami Marlins. Before a game on June 5, 2013, Byrd joked with Mets teammate Anthony Recker that he was going to hit two home runs in the game. Byrd did hit two home runs in the Mets 10-1 win over the Washington Nationals. Byrd hit .285 with 21 home runs and 71 RBI in 117 games for the Mets before being traded to the Pittsburgh Pirates.

On August 27, 2013, Byrd and John Buck were traded to the Pittsburgh Pirates in exchange for infield prospect Dilson Herrera and a player to be named later,[13] identified on August 29 as Vic Black.[14][15] In his first game with the Pirates, Byrd hit a 3-run home run in Pittsburgh's 7-1 victory over Milwaukee. In the 2013 National League Wild Card Game, Byrd went 2-4 with a home run and 2 RBI, as the Pirates defeated the Cincinnati Reds 6-2.[16] 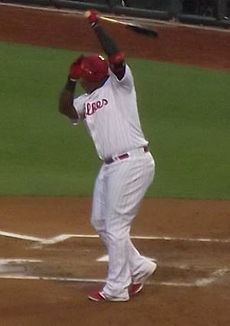 Byrd takes a practice swing in a 2014 game

On November 12, 2013, Byrd agreed in principle to a two-year contract worth $16 million to return to the Phillies. The deal includes an $8 million club option for 2016 that vests based on plate appearances.[17]

On August 20, 2015, Byrd was traded to the San Francisco Giants for Double-A reliever Stephen Johnson. He hit a home run on his very first at-bat with the Giants on August 21, 2015 against the Pittsburgh Pirates.[19]

Byrd hit the Giants' record-breaking 8th grand slam of the season against the Cardinals on August 28, 2015 against Michael Wacha. This was Byrd's first career hit against Wacha, and it was Wacha's first grand-slam given up.

After becoming a free agent following the 2015 season, Byrd signed a minor-league contract with the Cleveland Indians on March 18, 2016 with an invitation to major-league spring training camp.[20] The Indians purchased his contract and added him to the active roster on April 3, 2016.[21]