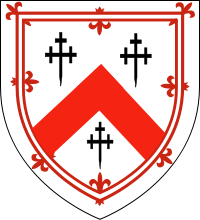 The name of the title was taken from the Island of Ailsa Craig in the Firth of Clyde.[1] The island is still owned by the family but it is currently up for sale for £1,500,000.[2]

James Kennedy, Archbishop of St Andrews, was the younger brother of the first Lord Kennedy.

The Marquess of Ailsa is the hereditary Clan Chief of Clan Kennedy.

The family's seats were Cassillis House[3] and Culzean Castle, near Maybole, Ayrshire.

"From 1759 to 1762 the titles and estates were in dispute between the heir male and the heir general. The latter, William [Douglas], Earl of Ruglen and March later Duke of Queensberry, was son and heir of William [Douglas], Earl of March, by his wife Anne [Hamilton], suo jure Countess of Ruglen, 1st dau. and heir of line of John [Hamilton], Earl of Selkirk and Ruglen, by his first wife Lady Anne Kennedy, the only daughter that had issue of John [Kennedy], 7th Earl of Cassillis. He claimed the estates under an entail of 5 September 1698, which he contended could not be set aside by the entail of 1759. The entail of 1759 was however upheld, though by a narrow majority, in the Court of Session, and confirmed, on appeal, by the House of Lords. He then, under the designation of "William, Earl of Cassillis, Ruglen and March" claimed "the titles and honours of Earl of Cassillis and Lord Kennedy," on the ground of certain charters of 24 April 1641 and 29 September 1642. Sir Thomas Kennedy, Bart., claimed the said titles as heir male, and the two petitions having been laid before the House of Lords, it was adjudged, 27 January 1762, that the latter had a right "to the honour and dignity of Earl of Cassillis as heir male of the body of David, the 1st Earl of Cassillis, and [to that] of Lord Kennedy as heir male of the body of Gilbert, the 1st Lord Kennedy.""[4]