From Infogalactic: the planetary knowledge core
Jump to: navigation, search
For other uses, see Marr (disambiguation). 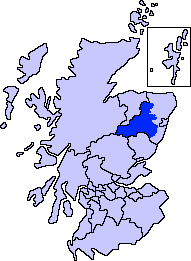 Map of Scotland showing the present-day committee area of Marr

Marr (Scottish Gaelic: Màrr) is one of six committee areas in Aberdeenshire, Scotland. It has a population of 34,038 (2001 Census). Someone from Marr is called a Màrnach in Scottish Gaelic.

To the west, the mountain environment of the Cairngorms National Park sustains a well-developed tourist industry based on heritage and outdoor pursuits. Forestry and livestock farming are key industries, particularly in remoter areas. Part of the area has qualified for EU financial assistance. To the east, Marr has experienced population growth due to its strong commuter links with the city of Aberdeen.[citation needed]

The committee area consists of three wards of Aberdeenshire council:

Between them the three wards elect 10 councillors to the sixty-eight member council.[2] 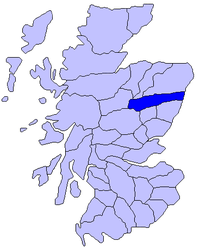 Map of Scotland showing the historic district of Marr

Marr is named after Mar, one of the historic districts of Scotland, extending from north of the Don southward to the Mounth. Like other such districts, it was under the rule of a mormaer in the Middle Ages. In the 12th century an earl (the Earl of Mar) took his place, but no definite succession of earls appears till the 13th century, nor is any connection established between them and the mormaers.

In the eleventh century Malcolm III introduced the office of sheriff to Scotland. He and his successors Edgar, Alexander I and in particular David I divided the country into sheriffdoms or shires.[3] Marr formed the larger portion of the shire of Aberdeen, which, as Aberdeenshire, in time became one of the counties of Scotland.[4]