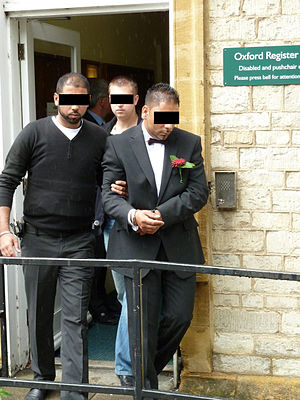 Operation by officers from the UK Border Agency at Oxford Registry Office on 8 June 2010 to stop a suspected sham marriage.

A marriage of convenience (plural marriages of convenience) is a marriage contracted for reasons other than that of relationship, family, or love. Instead, such a marriage is orchestrated for personal gain or some other sort of strategic purpose, such as political marriage. In the cases when it represents a fraud, it is called sham marriage.

Marriages of convenience are often contracted to exploit legal loopholes of various sorts. A couple may wed for reasons of citizenship or right of abode, for example, as many countries around the world will grant such rights to anyone married to a resident citizen. In the United States, this practice is known as a green card marriage. Another example is as a sort of catch-cry against the Australian Government's Youth Allowance laws. On 31 March 2010 two students were publicly and legally married on the University's lawn in a so-called "marriage of convenience" so that they could both receive full Youth Allowance.[1]

Because they exploit legal loopholes, marriages of convenience often have legal consequences. For example, U.S. Immigration (USCIS) can punish this with a $250,000 fine and five-year prison sentence.[2][3][4]

Another common reason for marriages of convenience is to hide one partner's homosexuality in cases where being openly gay is punishable or potentially detrimental. A sham marriage of this type, sometimes known as the lavender marriage, may thus create the appearance of heterosexuality. Such marriages may have one heterosexual and one gay partner, or two gay partners: a lesbian and a gay man married to each other. In the case where a gay man marries a woman, the woman is said to be his "beard".

The phrase "marriage of convenience" has also been generalized to mean any partnership between groups or individuals for their mutual (and sometimes illegitimate) benefit, or between groups or individuals otherwise unsuited to working together. An example would be a "National Unity Government", as existed in Israel during much of the 1980s or in Second World War Great Britain. More specifically, cohabitation refers to a political situation which can occur in countries with a semi-presidential system (especially France), where the president and the prime minister belong to opposed political camps.

Some marriages in medieval times were marriages of convenience, such as those of Agnes of Courtenay, or that of her daughter Sibylla, and that of Jeanne d'Albret, among many other examples. Members of royal families across Europe were wedded to each other to strengthen ties, peace, safety, predictability, networking, as well as for strategic and political insights. Also called a marriage of state.

Media related to Marriage of convenience at Wikimedia Commonsde:Scheinehe