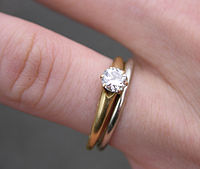 A yellow gold engagement ring set with a diamond, and a white gold wedding ring
File:1815-regency-proposal-woodcut.gif
A woodcut depicting a "one-knee proposal", Germany, 1815

A marriage proposal is an event where one person in a relationship asks for the other's hand in marriage.[1] If accepted, it marks the initiation of engagement, a mutal promise of later marriage. It often has a ritual quality, sometimes involving the presentation of an engagement ring and the formal asking of a question for example "Will you marry me, ...?" In the Anglosphere it is traditional for the man to make a proposal to the woman directly while genuflecting in front of her; the man sometimes puts the engagement ring on her finger at this point, as opposed to merely offering it to her. Sometimes the proposal is intended to be a surprise. If the woman accepts the proposal, she will typically assent to the man verbally and wear the ring during the time leading up to the wedding, known as the engagement. Acceptance of the proposal is not compulsory in Western culture; a woman may decline a proposal for various reasons, and may not declare what the reasons are.

In Scotland and Ireland, 29 February in a leap year is said to be the one day when a woman can propose to her partner. Finland has the same custom, with the addition that a man rejecting such a proposal was expected to buy his suitor enough cloth for a skirt as compensation.[2] As a monarch, Queen Victoria had to propose to Prince Albert.[3] Proposals by women have become more common in the Anglosphere in recent years, so jewelry companies have manufactured engagement rings for men.[4] In the United States, about 5% of proposals are made by women. Younger people are less likely to approve of women proposing.[5]

In many cultures it is traditional for a man to ask permission from a woman's father, in private, before proposing to her, or if her father has already died and she is still young of a near relation of hers. In earlier times it was common for fathers to refuse proposals from men whom they considered unsuitable as husbands for their daughters. Although it is uncommon in the West these days, the parents of the couple may make a marriage arrangement, preceding or superseding the proposal. Arranged marriages were common between members of royal families throughout most of European history; such marriage contracts and proposals were made at great distances and often without first-hand contact between the parties prior to the engagement.