From Infogalactic: the planetary knowledge core
Jump to: navigation, search
This article is about the place in Sicily. For Indian cuisine, see Masala. For other uses, see Marsala (disambiguation).

Marsala (Maissala in Sicilian; Lilybaeum in Latin) is an Italian town located in the Province of Trapani in the westernmost part of Sicily. Marsala is the most populated town in Trapani District and the fifth in Sicily.

The town is famous for the docking of Garibaldi on 11 May 1860 (the Expedition of the Thousand) and for its Marsala wine. A feature of the area is the Natural Reserve called Stagnone Lagoon — a marine area with salt ponds.

Marsala is built on the ruins of the ancient Carthaginian city of Lilybaion, and includes in its territory the archaeological site of Motya island, an ancient Phoenician town.

Situated at the extreme western point of Sicily, the town was founded on Lilibeo cape, from where the Aegadian Islands and the Stagnone Lagoon can be seen.

The territory of Marsala, 241 square kilometres (93 sq mi), has a rich cultural and landscape heritage; its area includes the Stagnone Lagoon, a Natural Reserve in which is located the island of Mozia.

The city of Marsala had a population of about 86,000 until the end of 1970, when Petrosino, a village formerly part of Marsala, decided to become a self-governing town after a local referendum.

The area of Marsala is classified as a seismic zone 2 (medium). In the last 200 years three earthquakes of medium-high intensity were recorded: 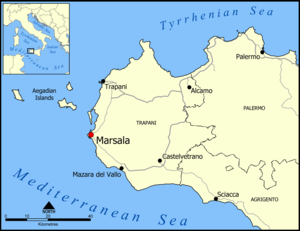 In 397 BC the Phoenician colony of Motya on the southwestern coast of Sicily was invaded and destroyed by the Syracusan tyrant Dionysius I. The survivors founded a town on the mainland nearby that they called Lilybaion (Lilybaeum in Latin), "The town that looks at Libya", on the site of modern-day Marsala.

The First Punic War began here when the Punic army landed at Lilybaion in 265/264 BC, then marched across Sicily to Messina, where the opening clash of the war took place.[1] 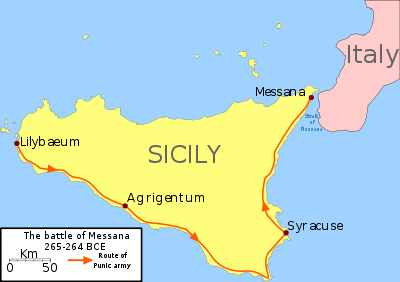 Route taken by Punic army in order to reach Messana.

Lilybaion was conquered by the Romans in 241 BC and became one of the most important towns in Sicily. The commercial centre was enriched with mansions and public buildings and dubbed splendidissima urbs by Cicero, who served as quaestor in the region between 76 and 75 BC.

Ravaged by Vandals during the 5th century AD, the town was annexed in the 6th century to Justinian's Byzantine Empire. In this period the town was struck by dysentery, raided by pirates, and neglected by Constantinople. The arrival of Arabic Berbers at the nearby Granitola mount in the 8th century entailed the resumption of commerce and the start of the rebirth of the town. The town was renamed Marsa ʿAlī "ʿAlī's harbour" or maybe, Marsa ʿāliyy, "Big harbour", for the width of the ancient harbour, placed near Punta d'Alga. Another possible derivation is Marsa Allāh, "God's harbour". Another theory is that Marsala comes from mare salis, "salt pans by the sea" from the presence of salt pans along the whole northern coast, although mention of this theory cannot be found in contemporary references and the installation of the bigger salt ponds on the group of islands composing the contemporary single island "Isola Lunga" was made just during 19th century.

Since the end of the 11th century, the area has been conquered by Swedish, Norman, Angevin and Aragonese troops. During this time, Marsala became wealthy, primarily through trade. However the blocking up of the harbour of Punta Alga, decreed by Emperor Charles V so as to stop Saracen forays, brought an end to this period of prosperity.

The development of Marsala wine at the end of the 18th century, headed by English merchants settled in Sicily, considerably improved local trade. This triggered an economic expansion in Marsala, including the funding of infrastructure projects such as the current harbour of Margitello.

On 11 May 1860 Giuseppe Garibaldi landed at Marsala, beginning the process of Italian unification.

On 11 May 1943, in the lead-up to the World War II Allied invasion of Sicily, an Allied bombardment of the town permanently damaged its Baroque centre and claimed many victims: "Marsala Wiped Off the Map" titled the New York Times on 13 May 1943.[2]