The Marsala Ship is the earliest warship known from archeological evidence.[1] It is a wreck discovered in 1969 in an area called Punta Scario in the harbor of Marsala in western Sicily, Italy, near the Aegadian Islands.[2] The Marsala Ship's "nationality" was painted on the sides with letters by its Punic builders from Carthage. [3] 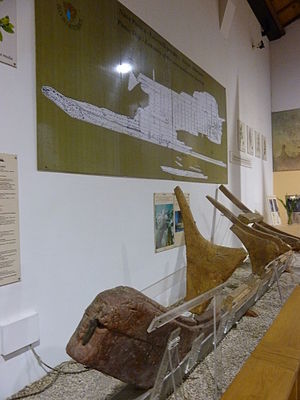 Prow and keel of the Punic ship

Its architecture and contents show that it was not a merchant cargo ship. A merchant cargo ship made regular journeys and required large containers for storing water. It also needed grinders and mortars for dried food. It would normally carry large pots for communal cooking. It would also have fish-hooks for catching available fresh fish.[2]

The Marsala Ship had only small cups and bowls for individual servings. Its wine, water, and other liquids were carried in amphorae of miscellaneous shapes. Food remains were fresh and perishable, such as various kinds of butchered meat. Bones of deer, horses, oxen, sheep, goats and pigs were all found. All this indicated it was intended as a warship and not as a merchant cargo vessel. The presence of ballast stones and lack of merchant cargo definitely indicate that it was a warship, probably used for scouting purposes or for ramming smaller boats. The remains of marijuana stems — which may have been chewed by the oarsmen — were also found in the wreck.[2]

It is believed to have been one of the Liburnian "long ships", an oared vessel with 17 sweeps per side used by ancient Carthage in the Battle of the Aegates Islands (241 BC).[2] This was the last battle of the First Punic War between Carthage and the Roman Republic. Carbon-14 tests on timbers and other materials determined a date of 235 BC.[3]

It was in 1969 that a captain of a commercial dredge digging sand for making glass discovered buried wood from ancient vessels in the area of Punta Scario.[2] In 1971 the movement of a sandbank exposed the "Punic Ship's" stern post with projecting timber.[2] This endangered the shipwreck, threatening the loss of the potential historical value of the information it revealed about the Phoenicians. Rescue excavation began in earnest and continued for the next four years.[3]

Some extremely rare finds amongst the shipwreck were a plaited basket, a piece of rope fashioned into a simple eye splice, a little brush, a knife blade, a spade, and a couple of toggles. Also found were parts of a human skeleton, possibly of a Carthaginian sailor trapped by the ship's ballast.[3]

The above pictures of the Marsala ship execavation are from the Regional Archaeological Museum Baglio Anselmi of Marsala in Sicily, Italy.[4]