From Infogalactic: the planetary knowledge core
Jump to: navigation, search
Not to be confused with Masala, a mixture of spices in South Asian cuisine. 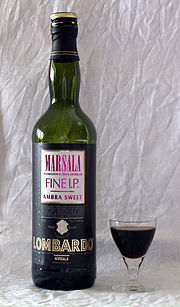 A sample of Marsala wine

Marsala is a wine, dry or sweet, produced in the region surrounding the Italian city of Marsala in Sicily. Marsala first received Denominazione di Origine Controllata (DOC) status in 1969.[1] The DOC status is equivalent to PDO: most countries limit the use of the term Marsala to those wines that come from the Marsala area, to which the European Union grants Protected Designation of Origin (PDO) status.[2]

While the city's natives sometimes drink "vintage" Marsala, the wine produced for export is universally fortified similar to Port, Madeira and Sherry. Originally, this addition of alcohol was to ensure that it would last on long ocean voyages, but now it is made that way because of its popularity in foreign markets.

The most creditable version of the introduction of Marsala fortified wine to a wider range of consumers is attributed to the English trader John Woodhouse. In 1773, Woodhouse landed at the port of Marsala and discovered the local wine produced in the region, which was aged in wooden casks and tasted similar to Spanish and Portuguese fortified wines then popular in England.[3] Fortified Marsala was, and is, made using a process called in perpetuum, which is similar to the solera system used to produce Sherry in Jerez, Spain.[4]

Woodhouse recognized that the in perpetuum process raised the alcohol level and alcoholic taste of this wine while also preserving these characteristics during long distance sea travel. Woodhouse further believed that fortified Marsala would be popular in England. Marsala indeed proved so successful that Woodhouse returned to Sicily and, in 1796, began its mass production and commercialization.[5] In 1806 was Benjamin Ingham (1784–1861), who arrived in Sicily from Leeds, that opened new markets for Marsala in Europe and the Americas.[6]

"In 1833, the entrepreneur Vincenzo Florio, a Calabrese by birth and Palermitano by adoption, bought up great swathes of land between the two largest established Marsala producers and set to making his own vintage with even more exclusive range of grape".[7]

Florio purchased Woodhouse's firm, among others, in the late 19th century and consolidated the Marsala wine industry. Florio and Pellegrino remain the leading producers of Marsala today.[8] 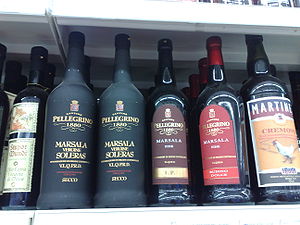 Marsala is produced using the Grillo, Inzolia, and Catarratto white grape varietals, among others.[9]

Marsala contains about 15–20% alcohol by volume. Different Marsala wines are classified according to their color, sweetness, and the duration of their aging. The three levels of sweetness are secco (with a maximum 40 grams of residual sugar per liter), semisecco (41–100 g/l) and sweet (over 100 g/l). The color and aging classifications are as follows:[10]

Marsala wine was traditionally served as an aperitif between the first and second courses of a meal. Contemporary diners will serve its drier versions chilled with Parmesan (stravecchio), Gorgonzola, Roquefort, and other spicy cheeses, with fruits or pastries, and the sweeter at room temperature as a dessert wine.[1] Marsala is sometimes discussed with another Sicilian wine, Passito di Pantelleria (Pantelleria Island's raisin wine).[12]

Marsala wine is frequently used in cooking, and is especially prevalent in dishes served in Italian restaurants in the United States. A typical Marsala sauce, for example, involves reducing the wine almost to a syrup with onions or shallots, then adding mushrooms and herbs. One of the most popular Marsala recipes is chicken marsala, in which flour-coated pounded chicken breast halves are braised in a mixture of Marsala, butter, olive oil, mushrooms, and spices.[13] Marsala is also used in some risotto recipes, and to produce rich Italian desserts such as zabaglione, tiramisu and shortcake.[14]