From Infogalactic: the planetary knowledge core
Jump to: navigation, search
This article is about a title. For other meanings, see marshal (disambiguation). For the rank of field marshal, see field marshal.

Marshal (also spelled marshall, esp. in British English)[1][2] is a term used in several official titles in various branches of society. As marshals became trusted members of the courts of Medieval Europe, the title grew in reputation. During the last few centuries, it has been used for elevated offices, such as in military rank and civilian law enforcement.

"Marshal" is an ancient loanword from Old (Norman) French (cf. modern French maréchal), which in turn is borrowed from Old Frankish *marhskalk (="stable boy, keeper, servant"), being still evident in Middle Dutch maerscalc, marscal, and in modern Dutch maarschalk (="military chief commander"; the meaning influenced by the French use).

It is cognate with Old High German mar(ah)-scalc "id.", modern German (Feld-)Marschall (="military chief commander"; again, the meaning influenced by the French use).[3]

The late Roman and Byzantine title of comes stabuli ("count of the stables") was adopted as a Latin analogue, which has become the French connétable and, derived from the French, the English word constable.

In many countries, the rank of marshal, cf. field marshal, is the highest army rank, outranking other general officers. The equivalent navy rank is often admiral of the fleet.

Marshals are typically, but not exclusively, appointed only in wartime. In many countries, especially in Europe, the special symbol of a marshal is a baton, and their insignia often incorporate batons.

In some countries, the term "marshal" is used instead of "general" in the higher air force ranks. The four highest Royal Air Force ranks are marshal of the Royal Air Force, air chief marshal, air marshal and air vice marshal (although the first named, which has generally been suspended as a peacetime rank, is the only one which can properly be considered a marshal). The five-star rank of marshal of the Air Force is used by some Commonwealth and Middle Eastern air forces.

In the French Army and most National Armies modeled upon the French system, maréchal des logis ("marshal-of-lodgings") is a cavalry term equivalent to sergeant.

Some historical rulers have used special "marshal" titles to reward certain subjects. Though not strictly military ranks, these honorary titles have been exclusively bestowed upon successful military leaders, such as the famous grand marshal of Ayacucho Antonio José de Sucre. Most famous are the Marshals of France (Maréchaux de France), not least under Napoléon I. Another such title was that of Reichsmarschall, bestowed upon Hermann Goering by Adolf Hitler, although it was never a regular title as it had been "invented" for Goering who was the only titleholder in history. In England during the First Barons' War the title "Marshal of the Army of God" was bestowed upon Robert Fitzwalter by election.

Both the Soviet Union and Russia have army general as well as "marshal" in their rank system, the latter being largely an honorary rank.

The following articles discuss the rank of marshal as used by specific countries:

These ranks are considered the equivalent to a marshal:

The name is also applied to the leader of military police organizations.

The function of the Marshal of the Court varies according to national tradition, but frequently he is the Chief of Staff of the Monarch's Household (= the palace and other domains). Often, the charge includes also the honorary privilege as chief of the protocoll to announce formally the arrival of VIP guests at audiences, state dinners, conferences in the monarch's premisses etc. This prestigious office was often made hereditary in the high nobility, e.g., the English Earl Marshal, or the Scots Earl Marischal.

For other historical uses of the word, see marszałek

Demonstration marshals, also called stewards, are used by the organizers of large or controversial demonstrations, rallies and protests, to help ensure the safety of the participants.[5][6] They are especially important for preventing infiltration by agents provocateurs.

Racing and other competitions

The word Maréchaussée derives from the French word Maréchal (plural Maréchaux), which was the second highest military charge in feudal France after Connétable (Constable), the military Commander-in-Chief of the Royal Armed Forces until 1627, when the charge of Constable was abolished. The Constable and the Marshals had also jurisdictional powers, at first only over members of the armed forces. The additional conferring of police powers led to the creation of the "Corps of the Maréchaussée" ("Marshalcy"; the forerunner of the modern Gendarmerie) and to an Ancien Régime Court of Justice called the "Tribunal of the Constable and the Marshals of France" which was competent for judging military personnel and civilians alike in cases of petty violations of the law.

The term Maréchaussée was also used for the Continental Army's military police during the American Revolution.

In the present-day Netherlands, the Koninklijke Marechaussee ("Royal Marshalcy") is a national military police force with civilian competences, similar to the French Gendarmerie nationale.

In the United States, marshal is used particularly for various types of law enforcement officers.

The federal court system in the United States is organized into 94 federal judicial districts, each with a court (and one or several judges), a United States Attorney with assistants such as prosecutors and government lawyers, and one marshal, appointed by the president, in charge of federal law enforcement. The courts are part of the independent judicial branch of the government, while the marshals and U.S. attorneys are part of the Department of Justice in the executive branch.

In actual practice, the U.S. marshal for the district primarily oversees court security, and has a unit of appointed deputies and special deputies. (Other law enforcement operations and the federal prison system are handled by a variety of federal police agencies.)

The United States Marshals Service is a professional, civil service unit of federal police, part of the system of marshals, made up of career law enforcement personnel rather than the appointed district marshals. The U.S. Marshals Service assists with court security and prisoner transport, asset forfeiture, serves arrest warrants and seeks fugitives.

The Federal Air Marshal Service is a separate armed federal law enforcement service employed to protect commercial airliners from the threat of aircraft hijacking. These air marshals work for the Transportation Security Administration of the U.S. Department of Homeland Security. 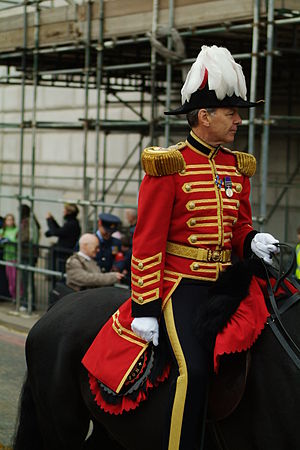 City Marshal of the City of London, on duty at the Lord Mayor's Show

William Marshal, 1st Earl of Pembroke, rose from obscurity due to his courage and skill as a knight, and he served four kings, ultimately becoming one of the most powerful men in Europe. Before him, the hereditary title of "marshal" designated the head of household security for the King of England; however, by the time he died in 1219, people throughout Europe (not just England) referred to William Marshal simply as "the marshal".

In 1595, Queen Elizabeth I issued letters patent giving powers to a marshal to maintain order within the City of London. Later, an under-marshal and six city marshalmen were appointed to assist the marshal in his duties. As a result of the Police Acts of 1829 and 1839, the marshal's role changed significantly. There is still one city marshal (As of 2009[update]), currently Colonel Billy King-Harman, CBE, who acts as peacekeeper to the Lord Mayor of London, leading processions and representing the Lord Mayor at all Entries of Troops (challenging and then escorting those few regiments entitled to march though the City of London).

Robert de Keith's great-grandson, William, was raised to the peerage as Earl Marischal by James II in about 1458. The peerage died out when George Keith, the 10th Earl, forfeited it by joining the Jacobite Rising of 1715.

The marischal was to serve as custodian of the Royal Regalia of Scotland, and protect the king's person when attending parliament. The former duty was fulfilled by the 7th Earl during the Wars of the Three Kingdoms, who hid the Royal Regalia at Dunnottar Castle. The role of regulation of heraldry carried out by the English Earl Marshal is carried out in Scotland by the Lord Lyon King of Arms.

The separate office of Knight Marischal was first created for the Scottish coronation of Charles I in 1633. The office is not heritable, although it has been held by members of the Keith family. 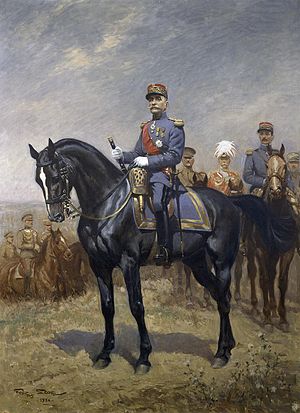 In France, the Maréchaussée ("Marshalcy") was the forerunner of the French Gendarmerie. A military corps having such duties was first created in 1337, placed under the command of the Constable of France (the Commander-in-Chief of the Royal Armed Forces), and named the Connétablie. In 1627 after the abolition of the title of Connétable, it was put under the command of the "Marshals of France," and renamed the Maréchaussée. Its main mission was to protect the roads from highwaymen.

The family of Levis-Mirepoix holds the unique prestigious title of « Maréchal de la Foi » ("Marshal of the Faith"). It dates back to the very cruel Crusade against the Albigensian "heretics" in southern France in the thirteenth century. The marshal's office, managing all the military affairs of the Crusader army as Chief commander, was granted to Lord Guy I de Levis, who bequeathed the title to his descendants.

The Maréchaussée was a mounted military police force organised and equipped along military lines. The force wore uniforms similar to those of the dragoons of the regular army and carried the same muskets and sabres. While its existence ensured the relative safety of French rural districts and roads, the Maréchaussée was regarded in contemporary England (which had no effective police force of any nature) as a symbol of foreign tyranny.

In 1789, on the eve of the French Revolution, the Maréchaussée numbered 3,660 men divided into small detachments called brigades. By law dated 16 February 1791, this force was renamed the Gendarmerie Nationale, though at first its personnel remained unchanged. Later many of them died under the guillotine, especially the members of the nobility.

The new designation "Gendarmerie" was derived from the term gens d'armes (gentlemen/people at arms) who were originally heavy cavalry regiments (called at first Ordonnances royales) which were part of the King's household, the equivalent of the English "Honourable Corps of Gentlemen at Arms".

The title "Marshal of France" is a Dignité d'État ("State Dignity") in the contemporary French Republic, not strictu sensu a military rank. It is granted to generals for exceptional achievements, especially in times of war or national crisis.

A Marshal of France displays seven stars and is equivalent to a six star general in armies of other countries. The marshal also receives a baton, a blue cylinder with stars, formerly fleurs-de-lis during the monarchy and Eagles during the First French Empire. It has the Latin inscription: Terror belli, decus pacis, which means "terror in war, ornament in peace".

Six Marshals of France have been given the even more prestigious rank of "Marshal General of the King's Armies and Camps": Biron, Lesdiguières, Turenne, Villars, Saxe, and Soult. The rank resp. title does no longer exist in present-day republican France.

In the Netherlands, the Koninklijke Marechaussee are the gendarmerie force created by King William I to replace the French gendarmerie on October 26, 1814. The word gendarmerie had gained a negative connotation, so William called the new force "marechaussée" (an alternate French word for gendarmerie). At that time, the marechaussee was part of the army (landmacht). The marechaussee performed police duties for the army, as well as civilian police work as a part of the national police (rijkspolitie). The marechaussee formed the only police force in many small cities like Venlo, especially in the southern provinces of Limburg and North Brabant. As of 1998, the marechaussee is a separate branch of the Dutch military, and is assigned both military and civilian police tasks.

In Mercedes Lackey's fictional country of Valdemar, one of the country's most important ranks is that of lord marshal.