Martha Ellis Gellhorn[1] (November 8, 1908 – February 15, 1998) was an American novelist, travel writer, and journalist, who is now considered one of the greatest war correspondents of the 20th century.[2][3] She reported on virtually every major world conflict that took place during her 60-year career. Gellhorn was also the third wife of American novelist Ernest Hemingway, from 1940 to 1945. At the age of 89, ill and almost completely blind, she died in 1998 of an apparent suicide.[4] The Martha Gellhorn Prize for Journalism is named after her.

Gellhorn was born in St. Louis, Missouri, the daughter of Edna Fischel Gellhorn, a suffragist, and George Gellhorn, a German-born gynecologist.[5][6] Her father and maternal grandfather were of Jewish origin, and her maternal grandmother came from a Protestant family.[5] Her brother, Walter Gellhorn, became a noted law professor at Columbia University. Her younger brother, Alfred Gellhorn, was an oncologist, and former dean of the University of Pennsylvania School of Medicine, when he died at age 94 in 2008.[7]

Gellhorn graduated in 1926 from John Burroughs School in St. Louis, and enrolled in Bryn Mawr College in Philadelphia. In 1927, she left before graduating to pursue a career as a journalist. Her first published articles appeared in The New Republic. In 1930, determined to become a foreign correspondent, she went to France for two years, where she worked at the United Press bureau in Paris. While in Europe, she became active in the pacifist movement, writing about her experiences in her book What Mad Pursuit (1934).

After returning to the United States, Gellhorn was hired by Harry Hopkins, who she had met through her friendship with First Lady Eleanor Roosevelt,[8] as a field investigator for the Federal Emergency Relief Administration (FERA), created by Franklin D. Roosevelt to aid in the war on the Great Depression. Gellhorn traveled around the United States for FERA to report on the impact of the Depression on the country. She first went to Gastonia, North Carolina, where she used her observation and communication skills to report on how the people of that town were affected by the Depression. Later, she worked with Dorothea Lange, a photographer, to document the everyday lives of the hungry and homeless. Their reports later became part of the official government files for the Great Depression. They were able to investigate topics that were not usually open to women of the 1930s, which made Gellhorn, as well as Lange, major contributors to American history.[9] Her findings were the basis of a collection of short stories, The Trouble I've Seen (1936).[8]

War in Europe and marriage to Hemingway

Gellhorn first met Hemingway during a 1936 Christmas family trip to Key West, Florida. They agreed to travel to Spain together to cover the Spanish Civil War, where Gellhorn had been hired to report for Collier's Weekly. The pair celebrated Christmas of 1937 together in Barcelona.[8]

Later, from Germany, she reported on the rise of Adolf Hitler, and in 1938 was in Czechoslovakia. After the outbreak of World War II, she described these events in the novel A Stricken Field (1940). She later reported the war from Finland, Hong Kong, Burma, Singapore, and England.[8] Lacking official press credentials to witness the Normandy landings, she hid in a hospital ship bathroom, and upon landing impersonated a stretcher bearer; she later recalled, "I followed the war wherever I could reach it." She was the only woman to land at Normandy on D-Day on June 6, 1944.[10] She was also among the first journalists to report from Dachau concentration camp after it was liberated by Allied Troops.

She and Hemingway lived together off and on for four years, before marrying in December 1940.[8] (Hemingway had ostensibly lived with his second wife, Pauline Pfeiffer, until 1939). Increasingly resentful of Gellhorn's long absences during her reporting assignments, Hemingway wrote her when she left their Finca Vigía estate near Havana in 1943, to cover the Italian Front: "Are you a war correspondent, or wife in my bed?" Hemingway himself, however, would later go to the front just before the Normandy landings, and Gellhorn also went, with Hemingway trying to block her travel. When she arrived by means of a dangerous ocean voyage in war-torn London, she told him she had had enough.[8] She had found, as had his other wives, that, as described by Bernice Kert in The Hemingway Women: "Hemingway could never sustain a long-lived, wholly satisfying relationship with any one of his four wives. Married domesticity may have seemed to him the desirable culmination of romantic love, but sooner or later he became bored and restless, critical and bullying."[8] After four contentious years of marriage, they divorced in 1945.[8]

The 2012 film Hemingway & Gellhorn is based on these years. The 2011 documentary film No Job for a Woman: The Women Who Fought to Report WWII features Martha Gellhorn and how she changed war reporting.[11]

After the war, Gellhorn worked for the Atlantic Monthly, covering the Vietnam War and the Arab-Israel conflicts in the 1960s-70s. She passed her 70th birthday in 1979, but continued working in the following decade, covering the civil wars in Central America. As she approached 80, Gellhorn began to slow down physically and although she still managed to cover the US invasion of Panama in 1989, she finally retired from journalism as the 1990s began. An operation for cataracts was unsuccessful and left her with permanently impaired vision. Gellhorn announced that she was "too old" to cover the Balkan conflicts in the '90s, although she did manage one last overseas trip to Brazil in 1995 to report on poverty in that country, which was published in the literary journal Granta. This last feat was accomplished with great difficulty as Gellhorn's eyesight was failing and she could not read her own manuscripts.[4]

Gellhorn published numerous books, including a collection of articles on war, The Face of War (1959); The Lowest Trees Have Tops (1967), a novel about McCarthyism; an account of her travels (including one trip with Hemingway), Travels With Myself and Another (1978); and a collection of her peacetime journalism, The View From the Ground (1988).[4]

Peripatetic by nature, Gellhorn reckoned that in a 40-year span of her life, she had created homes in 19 different locales.[4]

Gellhorn's first major affair was with the French economist Bertrand de Jouvenel. It began in 1930, when she was 22 years old, and lasted until 1934. She would have married de Jouvenel if his wife had consented to a divorce.[12]

She met Ernest Hemingway in Key West, Florida in 1936. They were married in 1940. Gellhorn resented her reflected fame as Hemingway's third wife, remarking that she had no intention of "being a footnote in someone else's life". As a condition for granting interviews, she was known to insist that Hemingway's name not be mentioned.[13]As she put it once, "I've been a writer for over 40 years. I was a writer before I met him and I was a writer after I left him. Why should I be merely a footnote in his life?"

While married to Hemingway, Gellhorn had an affair with U.S. paratrooper Major General James M. Gavin, commanding general of the 82nd Airborne Division. Gavin was the youngest divisional commander in the U.S. army in World War II.

Between marriages after divorcing Hemingway in 1945, Gellhorn had romantic liaisons with "L", Laurance Rockefeller, an American businessman (1945); journalist William Walton (1947) (no relation to the British composer); and medical doctor David Gurewitsch (1950). In 1954, she married the former managing editor of Time Magazine, T. S. Matthews, and moved to London, which was to be her home for the rest of her life. She and Matthews divorced in 1963.[14]

In 1949, Gellhorn adopted a boy, Sandy, from an Italian orphanage. Although Gellhorn was briefly a devoted mother, she was not by nature maternal. She eventually left Sandy in the care of relatives in Englewood, New Jersey, for long periods of time, with Sandy enduring many absences from Gellhorn during her travels, and eventually he attended boarding school. He was reported to have grown to disappoint her, and their relationship was said to have become embittered.[15]

However, the legacy of Gellhorn's personal life remains shrouded in controversy. Supporters of Gellhorn say her unauthorized biographer, Carl Rollyson, is guilty of "sexual scandal-mongering and cod psychology". Several of her prominent close friends (among them the actress Betsy Drake; journalist John Pilger; writer James Fox; and Martha's younger brother, Alfred) have dismissed the characterizations of her as sexually manipulative and maternally deficient. Her supporters include her stepson, Sandy Matthews, who describes Gellhorn as "very conscientious" in her role as stepmother;[16] and Jack Hemingway once said that Gellhorn, his father's third wife, was his "favorite other mother".[17]

Regarding sex, in 1972 Gellhorn wrote:

If I practised sex, out of moral conviction, that was one thing; but to enjoy it ... seemed a defeat. I accompanied men and was accompanied in action, in the extrovert part of life; I plunged into that ... but not sex; that seemed to be their delight and all I got was a pleasure of being wanted, I suppose, and the tenderness (not nearly enough) that a man gives when he is satisfied. I daresay I was the worst bed partner in five continents.[18]

On her relationship with Hemingway, she said "I provided sex only after all excuses failed and with the hope that it would be over quickly."

In her last years, Gellhorn was in frail health, nearly blind and suffering from ovarian cancer that had spread to her liver. On February 15, 1998, she committed suicide in London apparently by swallowing a cyanide capsule.

The Martha Gellhorn Prize for Journalism was established in 1999 in her honor. 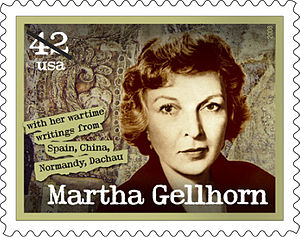 Gellhorn was one of five individuals – and the only woman – honored in the 2008 American Journalists stamp series.

During her lifetime Gellhorn published books of fiction, travel writing, and reportage. Her selected letters were published posthumously in 2006.

In 2011, Gellhorn was the subject of an hour-long episode of the World Media Rights series Extraordinary Women, which airs on the BBC, and periodically in the United States on PBS.[20]

In 2012, Gellhorn was played by Nicole Kidman in Philp Kaufman's film, Hemingway & Gellhorn.