Dempsey was born on March 14, 1952, and attended John S. Burke Catholic High School in Goshen, New York. Dempsey is Irish American.[4][5][6] Following high school, Dempsey attended the United States Military Academy at West Point and graduated with the Class of 1974. In his class were three other future four-star generals, David Petraeus, Walter L. Sharp and Keith B. Alexander. He has a Master's degree in literature from Duke University, where he wrote a thesis on the Irish literary revival.[7] Dempsey's four grandparents were born in the counties of Sligo, Donegal, Mayo and Roscommon in Ireland. He learned a small amount of the Irish language while spending his summers in Ireland as a child.[7][8]

Dempsey received a commission as an Armor officer upon graduation from the United States Military Academy in 1974. As a company-grade officer, he served in 1st Squadron, 2d Armored Cavalry Regiment as the S-1 OIC. He went on to be the Executive Officer of the 3rd Brigade 3rd Armored Division during Operation Desert Shield/Storm. As Lieutenant Colonel he commanded the 4th Battalion of the 67th Armored Regiment "Bandits" from 1992–1995 in the 1st Armored Division in Friedberg, Hesse, Germany.[9]

In June 2003, then Major General Dempsey assumed command of 1st Armored Division. He succeeded Ricardo S. Sanchez who was promoted to Lieutenant General, as Corps Commander V Corps. Dempsey's command of the 1st Armored Division lasted until July 2005 and included 13 months in Iraq, from June 2003 to July 2004. While in Iraq, 1st Armored Division, in addition to its own brigades, had operational command over the 2nd Armored Cavalry Regiment and a brigade of the 82nd Airborne Division; the command, called "Task Force Iron" in recognition of the Division's nickname, "Old Ironsides", was the largest division-level command in the history of the United States Army.[10] 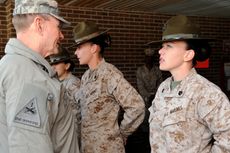 It was during this time that the U.S. intervention in Iraq changed dramatically as Fallujah fell to Sunni extremists and supporters of Muqtada al-Sadr built their strength and rose up against American forces. Then Major General Dempsey and his command assumed responsibility for the Area of Operations in Baghdad as the insurgency incubated, grew, and exploded. General Dempsey has been described by Thomas Ricks in his book "Fiasco": "In the capital itself, the 1st Armored Division, after Sanchez assumed control of V Corps, was led by Maj. Gen. Martin Dempsey, was generally seen as handling a difficult (and inherited) job well, under the global spotlight of Baghdad."

On February 5, 2008, Dempsey was nominated to head the U.S. Army, Europe/Seventh Army, and was nominated for promotion to four-star general upon Senate approval. 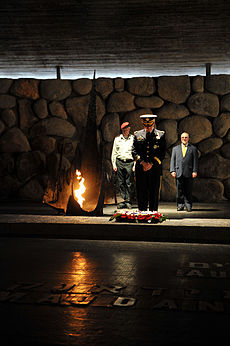 On January 6, 2011, Defense Secretary Robert Gates announced that he would recommend that the President nominate General Dempsey to succeed General George Casey as the Army Chief of Staff.[16] On February 8, 2011, Gates announced that President Barack Obama nominated Dempsey to be the 37th Chief of Staff of the United States Army.[17] On March 3, 2011, Dempsey testified before the United States Senate Committee on Armed Services,[18] and on March 15, 2011, the committee affirmatively reported Dempsey's nomination.[19] On March 16, 2011, the Senate confirmed Dempsey's nomination by unanimous consent.[20] On April 11, 2011, Dempsey was sworn in as Chief of Staff of the United States Army at a ceremony at Fort Myer.

With Admiral Michael Mullen set to retire as Chairman of the Joint Chiefs of Staff in September 2011, U.S. President Obama needed to select his replacement. The Vice-Chairman, Marine General James Cartwright, who was initially believed to be the front runner for the job, had fallen out of favor among senior officials in the Defense Department. Obama administration officials revealed on May 26, 2011, that the President would nominate Dempsey to the post of Chairman.[21] In August 2011, General Dempsey was confirmed by unanimous consent to succeed Admiral Mike Mullen as the next Chairman of the Joint Chiefs of Staff. He was sworn in as 18th Chairman of the Joint Chiefs of Staff on October 1, 2011. On June 26, 2013, President Barack Obama re-nominated General Dempsey to serve a second two-year term as Chairman.[22] Dempsey stepped down on September 25, 2015.

Dempsey is married to his high school sweetheart, Deanie.[23] They have three children: Chris, Megan, and Caitlin. Each has served in the United States Army and is married with three children. Chris remains on active duty as a cavalry major. Martin and Deanie have nine grandchildren.[24]

On December 7, 2011, Dempsey received the USO's Distinguished Service Award on behalf of all military members.[25]