From Infogalactic: the planetary knowledge core
Jump to: navigation, search
Not to be confused with Martin Ffolkes. 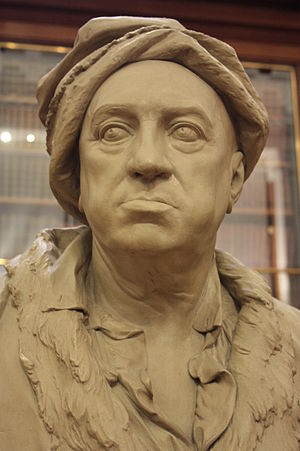 Folkes was born in Westminster on 29 October 1690, the eldest son of Martin Folkes, councillor at Law.[1] Educated at Clare College, Cambridge,[2] he so distinguished himself in mathematics that when only twenty-three years of age he was chosen a fellow of the Royal Society. He was elected one of the council in 1716, and in 1723 Sir Isaac Newton, president of the society, appointed him one of the vice-presidents. On the death of Newton he became a candidate for the presidency, but was defeated by Sir Hans Sloane, whom, however, he succeeded in 1741; in 1742 he was made a member of the French Royal Academy of Sciences; in 1746 he received honorary degrees from Oxford and Cambridge.

Folkes was a prominent Freemason, being appointed Deputy Grand Master of the Premier Grand Lodge of England during the year 1724–1725.[3]

In 1733 he set out on a tour through Italy, in the course of which he composed his Dissertations on the weights and Values of Ancient Coins. Before the Society of Antiquaries, of which he was president from 1749 to 1754, he read in 1736 his Observations on the Trajan and Antonine Pillars at Rome and his Table of English Gold Coins from the 18th Year of King Edward III. In 1745 he printed the latter with another on the history of silver coinage. He also contributed both to the Society of Antiquaries and to the Royal Society other papers, chiefly on Roman antiquities. In 1739 he was elected one of the founding vice-presidents of London's charitable Foundling Hospital for abandoned children, a position he maintained until 1747.

Folkes was married in 1714 to Lucretia Bradshaw, an actress who had appeared at the Haymarket and Drury Lane (see Nichols's Lit. Anecdot. ii. 578–598). His portrait was painted and etched by William Hogarth (1697–1764).

Folkes was a noted atheist, and abhorred racial prejudice. Some of his public statements have been interpreted as evidence of a Darwinian viewpoint.[4] According to the archaeologist William Stukeley, he set up an Infidels Club in 1720, and caused several young noblemen of the Royal Society to jeer whenever scriptural material was injected into a scientific debate.[5]

There is a memorial to Folkes at Westminster Abbey.[6]