Sir Martin Frobisher (c. 1535 or 1539 – 15 November 1594[1]) was an English seaman and privateer (licensed pirate) who made three voyages to the New World to look for the Northwest Passage. All landed in northeastern Canada, around today's Resolution Island and Frobisher Bay.[2] On his second voyage, Frobisher found what he thought was gold ore and carried 200 tons of it home on three ships, where initial assaying determined it to be worth a profit of £5.2 per ton. Encouraged, Frobisher returned to Canada with an even larger fleet and dug several mines around Frobisher Bay. He carted 1,350 tons of the ore back where, after years of smelting, it was realised that both that batch of ore and the earlier one he had taken were worthless iron pyrite. As an English privateer/pirate, he collected riches from French ships. He was later knighted for his service in repelling the Spanish Armada in 1588.

Frobisher was born c. 1535, the son of merchant Bernard Frobisher of Altofts, Yorkshire. He was raised in London by a relative, Sir John York.[3]

However, some records question the parentage of Frobisher being Bernard, suggesting instead that his father was actually Gregory Frobisher, Esq., also of Altofts, Yorkshire, by his wife, Ann.[4][5]

He first went to sea as a cabin boy in 1544. In 1554 he was captured by the Portuguese and spent some time in captivity, after which he set up in business as a merchant in Morocco. He later became a pirate, operating from a port in southern Ireland.[6]

As early as 1560 or 1561, Frobisher had formed a resolution to undertake a voyage in search of a Northwest Passage as a trade route to India and China (referred to at that time as Cathay).

It took him 5 years to gain necessary funding for his project. In 1576, Frobisher managed to convince the Muscovy Company, an English merchant consortium which had previously sent out several parties searching for the Northeast Passage, to license his expedition. With the help of Michael Lok, the Muscovy Company's director, Frobisher was able to raise enough capital for three barks: Gabriel and Michael, of about 20–25 tons each and an unnamed pinnace of ten tons, with a total crew of 35.[7]

He weighed anchor at Blackwall, and, after having received a good word from Queen Elizabeth I of England at Greenwich, set sail on 7 June 1576, by way of the Shetland Islands.

In a storm, the pinnace was lost and Michael was abandoned, but on 28 July, Gabriel sighted the coast of Labrador.

A few days later, the mouth of Frobisher Bay was reached, and because ice and wind prevented further travel north, Frobisher determined to sail westward up this passage (which he conceived to be a strait) to see "whether he might carry himself through the same into some open sea on the back side."

Baffin Island was reached on 18 August 1576, where the expedition met some local Inuit. Having made arrangements with one of the Inuit to guide them through the region, Frobisher sent five of his men in a ship's boat to return him to shore, but instructing them to avoid getting too close to any of the others. The boat's crew disobeyed, however, and five of Frobisher's men were taken captive. After days of searching Frobisher could not recover them, and eventually took hostage the man who had agreed to guide them to see if an exchange for the missing boat's crew could be arranged. The effort was fruitless, and the men were never seen again, but Inuit legend tells that the men lived among them for a few years until they died attempting to leave Baffin Island in a self-made boat. Frobisher turned homewards, and reached London on 9 October. Among the things which had been hastily brought away by the men was a black stone 'as great as a half-penny loaf' which had been collected loose on the surface of Hall's Island off Baffin Island by Robert Garrard, who took it to be sea coal, of which they had need.[8][9]

Assayers in London were unimpressed with the ore. Only one out of four experts consulted (Burchard Kranich[10]) believed the ore to be gold-bearing. Nevertheless, Frobisher's backers, led by Michael Lok and the Muscovy Company, used this assessment to lobby for investment for another voyage.[11]

The next year, a much bigger expedition than the former was fitted out. The Queen sold the Royal Navy ship Ayde to the Company of Cathay and provided £1000 towards the expenses of the expedition. The Company of Cathay was granted a charter from the crown, giving the company the sole right of sailing in every direction but the east. Frobisher was appointed high admiral of all lands and waters that might be discovered by him.

On 27 May 1577, the expedition, consisting, besides Ayde, of the ships Gabriel and Michael, with an aggregate complement of 150 men, including miners, refiners, gentlemen, and soldiers, left Blackwall, and sailing by the north of Scotland reached Hall's Island at the mouth of Frobisher Bay on 17 July. A few days after, the country and the south side of the bay was solemnly taken possession of in the Queen's name.

Several weeks were now spent in collecting ore, but very little was done in the way of discovery, Frobisher being specially directed by his commission to "defer the further discovery of the passage until another time." There was much parleying and some skirmishing with the Inuit, and earnest but futile attempts were made to recover the five men captured the previous year.

The return was begun on 23 August 1577, and Ayde reached Milford Haven on 23 September. Gabriel and Michael later arrived separately at Bristol and Yarmouth.

With him, Frobisher brought three Inuit from Baffin Island, a man called Calichoughe, a woman, Egnock, and her child, Nutioc, who had been forcibly taken from the island. All three soon died after their arrival in England.[12] Calichoughe died from an unintended broken rib from his capture that eventually punctured his lung.

Frobisher was received and thanked by the queen at Windsor. Great preparations were made and considerable expense incurred for the assaying of the great quantity of "ore" (about 200 tons) brought home. This took up much time, and led to considerable dispute among the various parties interested. 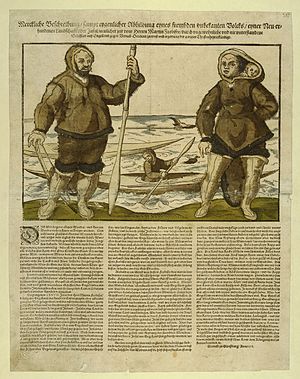 Meanwhile, the faith of the Queen and others remained strong in the productiveness of the newly discovered territory, which she herself named Meta Incognita. It was resolved to send out a larger expedition than ever, with everything necessary to establish a colony of 100 men. Frobisher was again received by the queen, and her Majesty threw a fine chain of gold around his neck.

The expedition consisted of fifteen vessels: the flagship Ayde', Michael, and Gabriel, as well as Judith, Dennis or Dionyse, Anne Francis, Francis of Foy and Moon of Foy, Bear of Leycester, Thomas of Ipswich, Thomas Allen, Armenall,[13] Soloman of Weymouth, Hopewell, and Emanuel of Bridgwater.[14]

On 3 June 1578, the expedition left Plymouth and, sailing by the English Channel, on 20 June reached the south of Greenland, where Frobisher and some of his men managed to land. On 2 July, the foreland of Frobisher Bay was sighted. Stormy weather and dangerous ice prevented the rendezvous from being gained, and, besides causing the wreck of the barque Dennis of 100 tons, drove the fleet unwittingly up a new strait (Hudson). After proceeding about sixty miles up this "mistaken strait," Frobisher with apparent reluctance turned back, and after many buffetings and separations, the fleet at last came to anchor in Frobisher Bay, which was named after him.

During this voyage, the vessel Emanuel claimed to have found the phantom Buss Island.

Some attempt was made at founding a settlement, and a large quantity of ore was shipped. Too much dissension and discontent prevented a successful settlement. On the last day of August, the fleet set out on its return to England, which was reached in the beginning of October; although the vessel Emanuel was wrecked en route at Ard na Caithne, on the west coast of Ireland.[15] The ore was taken to a specially constructed smelting plant at Powder Mill Lane in Dartford. However, it proved to be valueless iron pyrite[16] and was eventually salvaged for road metalling. 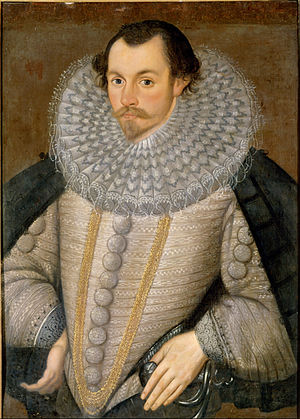 In 1591, he visited his native Altofts, and there married his second wife and sailed with her, Dorothy Wentworth (1543 – 3 January 1601), a daughter of Thomas, 1st Baron Wentworth, becoming at the same time a landed proprietor in Yorkshire and Notts. He found, however, little leisure for a country life, and the following year took charge of the fleet fitted out by Sir Walter Raleigh to the Azores, capturing a rich prize the Madre de Deus.

In November 1594, he was engaged with a squadron in the siege and relief of Brest, where he received a gunshot wound during the Siege of Fort Crozon,[17] a Spanish-held fortress. Poor medical treatment resulted in his death days later at Plymouth on 15 November. His soft organs were buried at St Andrew's Church, Plymouth on 22 November. His body was then taken to London and buried at St Giles-without-Cripplegate, Fore Street.[18] 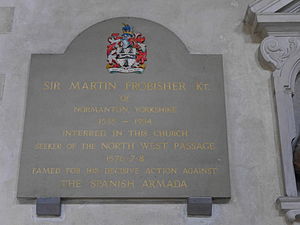 A Parker-class flotilla leader destroyer was named HMS Frobisher during construction but was named HMS Parker when launched in 1915. It was scrapped in 1921.

The Royal Navy Hawkins-class heavy cruiser HMS Frobisher was named after him. It was scrapped in 1949.

Frobisher Crescent, part of the Barbican Estate in London, is named after Frobisher.[19]

A stained glass window in memory of him can be found in All Saints Church, Normanton nearby to his birthplace in Altofts, West Yorkshire, as remembrance of his expedition in the location.

An early version of Thanksgiving was celebrated after the safe landing of Frobisher's fleet in Newfoundland after an unsuccessful attempt to find the Northwest Passage. (Hogan. 2011)

The small settlement of Frobisher, Saskatchewan and Frobisher Lake, in northern and southern Saskatchewan, respectively.