Penn Station stop at the downtown end of the busway.

The Martin Luther King Jr. East Busway is a two-lane bus-only highway serving the city of Pittsburgh and many of its eastern neighborhoods and suburbs. It was named after Dr. Martin Luther King Jr. in recognition of the eastern portion of the route's serving many predominantly African-American neighborhoods, such as Wilkinsburg and East Liberty. It is owned and maintained by the Port Authority of Allegheny County.

Originally occupied by a railroad line, planning for the East Busway began shortly after the Port Authority of Allegheny County purchased the Pittsburgh Railways Company in 1964.[1] The original segment of the busway opened in February 1983, running between Downtown Pittsburgh and Edgewood, a length of 6.8 miles.

In 2003, the busway was extended into Swissvale by 2.3 miles, making its current length 9.1 miles.

In July 2013, the East Busway was discussed in the context of the Mon Fayette Expressway. In order to provide a bypass for the often congested Squirrel Hill Tunnel, civic planners have raised the possibility of opening the Busway to High Occupancy Vehicle (HOV) traffic.[2] 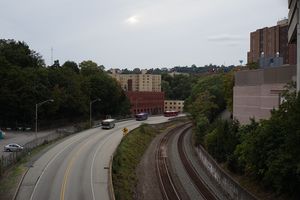 Following the naming convention of each busway being designated by a color, bus routes that use the East Busway begin with a "P" for purple. The P1 ("East Busway All Stops") is the main route, operating seven days a week and running the full length of the Busway between Swissvale and Downtown Pittsburgh, making all stops, before running a short loop through the central business district. Two additional routes run Monday through Friday: The P3 ("East Busway Oakland") operates between Swissvale and Oakland via a connecting road to Oakland between the Herron and Negley Stations. The route then serves the busy Fifth Avenue corridor, providing access to universities, hospitals, and office buildings. The P2 ("East Busway Short") operates only between Wilkinsburg and Downtown and also makes a loop through Downtown.

Many of the Port Authority's express and suburban Flyer routes also use the busway (but do not make stops along it), primarily during weekday rush hours. The busway enables these routes to bypass the heavily congested Parkway East (Interstate 376), making for faster trip times.