John Martin "Marty" Stuart (born September 30, 1958) is an American country music singer-songwriter, known for both his traditional style, and eclectic merging of rockabilly, honky tonk, and traditional country music. In the early 1990s, he had a successful string of country hits.

Early life and rise to fame

Born in Philadelphia, Mississippi, Stuart is of French, English, Choctaw, and Colombian descent.

From an early age, he was obsessed with country music and taught himself how to play the guitar and mandolin. At the age of 12, Stuart started performing with the bluegrass group The Sullivan Family. He later met Lester Flatt bandmember Roland White. White invited Stuart to play with him and the Nashville Grass at the Labor Day gig in Delaware in 1972. After this, White asked him to join the band permanently and Stuart accepted. This made White responsible for the rest of Stuart's education. Fourteen-year-old Stuart appeared with the band on the final episode of the fifth season of Hee Haw. Marty stayed with Lester Flatt until Flatt broke up the band in 1978 due to his failing health.

In 1979, Flatt died. Stuart pushed forward and worked with fiddler Vassar Clements. He also worked with guitarist Doc Watson. In 1980, he joined Johnny Cash's backing band. The previous year, Stuart made his first solo album, With a Little Help From My Friends, on Ridge Runner Records.

In 1982, he released a second album called Busy Bee Cafe on Sugar Hill Records. Both of these releases were bluegrass albums, and they failed to garner any success. In 1983, Stuart married Johnny Cash's daughter, Cindy. They divorced five years later, and had no children. In 1985, Stuart left Cash's band to pursue a solo career.

In 1985, Stuart accompanied Johnny Cash to Memphis and played on the "Class of '55" album that also featured Carl Perkins, Roy Orbison, and Jerry Lee Lewis. At the end of the session Perkins presented him with his guitar.[1] Later that year, Stuart left Cash's band and landed a recording contract with Columbia Records. The following year, he released a self-titled album on the label, which produced a Top 20 hit on the Billboard country charts in the song "Arlene." Stuart garnered his first cover story in 1986, appearing in a Mid-South magazine article titled "Nashville's New Hopes."[2] Also in the article were Vince Gill, Sweethearts of the Rodeo and Lisa Angelle. Although he had a hit with "Arlene", the album itself did not sell well. Stuart recorded a follow-up album, Let There Be Country, but Columbia failed to release it after Stuart had a heated discussion with the label head over its decision to drop Johnny Cash from the Columbia roster.[3]

His marriage to Cindy Cash ended in divorce in 1988, leading to Stuart's return home to Mississippi. Roland White invited Stuart to rejoin his band as their fiddler and this helped Stuart build his confidence to try again at becoming a singer.

Stuart soon returned to Nashville. He landed a deal with MCA Records in 1989, formerly Decca Records. That year, Stuart released his first album on MCA, Hillbilly Rock. In 1990, he found commercial success with the album, when two songs from Hillbilly Rock became hits. The title track, "Hillbilly Rock," was his first Top Ten hit on the Country charts. The other song, "Western Girls," broke the Top 20. The album received positive reviews from critics, who compared Marty's work to that of country singer Dwight Yoakam. The album featured a cover version of the Johnny Cash hit "Cry! Cry! Cry!." In 1991, he released another album, Tempted, and the title track became Stuart's first Top-5 hit.

In 1991, Marty co-wrote a song with Travis Tritt called "The Whiskey Ain't Workin'." The song was recorded as a duet on Tritt's 1991 album It's All About to Change, and became Marty's biggest hit. In 1992, his former record company, Columbia finally released his album Let There Be Country. That same year, Stuart released the album This One's Gonna Hurt You on MCA. The album's title track, a duet with Travis Tritt, was released as a single, and became another Top Ten hit for Stuart. This One's Gonna Hurt You became Stuart's first gold album.

Between 1991 and 1992 Marty and Travis went on the road for the "No Hats" tour, referring to "hat acts," as it seemed at the time every mainstream country singer was wearing a cowboy hat on stage. Although Stuart built quite a fan following, follow-up success was hard to find. In 1994, Stuart contributed the song "Up Above My Head / Blind Bartimus" with Jerry Sullivan and Tammy Sullivan to the AIDS benefit album Red Hot + Country produced by the Red Hot Organization. The release of his 1994 album Love and Luck turned out to be less successful than hoped. Three singles were released from the album, but only one ("Kiss Me, I'm Gone") made the Top 40. His record sales began to slip. This led to MCA releasing the album The Marty Party Hit Pack in 1995. This also led to a series of "Marty Party" concerts on the Nashville network. The year 1996 saw the release of another album, Honky Tonkin's What I Do Best. Once again, sales were less than hoped for. Stuart released three singles, with only one reaching the Top 40.

Career since the late 1990s

In 1997, Stuart married legendary country music singer Connie Smith. Connie and Marty met back in the 1960s, when he saw Connie performing at one of her concerts, and he told his mother that day, that someday he would marry her. In 1998, he helped produce Smith's comeback album on the Warner Bros. label, Connie Smith. He also co-wrote 8 out of 10 songs on the album. Stuart released another album in 1999 called The Pilgrim, along with another unsuccessful single, that failed to even make the Top 40. 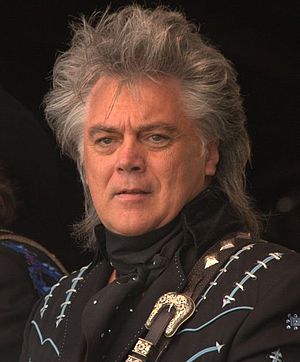 In 2000, Stuart performed the voice of Reverend in Tom Sawyer. Stuart left MCA in 2000, joining Columbia Records, releasing a new album in 2003; however, this album was credited to "Marty Stuart & the Fabulous Superlatives." The lead single just missed Top 40 status. In 2005, Stuart launched a custom record label, Superlatone Records, to issue overlooked Southern Gospel and Roots music recordings. Stuart released three critically acclaimed collections on Superlatone, Souls' Chapel, Badlands and Live at the Ryman. In October 2005, Stuart released a concept album, Badlands: Ballads Of The Lakota, which pays tribute to the Sioux culture in what is now South Dakota.

His collection of music memorabilia and photography was exhibited at the Tennessee State Museum in 2007 as "Sparkle & Twang: Marty Stuart's American Musical Odyssey." The "Sparkle & Twang" exhibit later appeared at the Rock and Roll Hall of Fame and Museum in Cleveland, Ohio, and at the Arkansas Statehouse Museum. Also in 2007, Stuart produced country legend Porter Wagoner's debut album on the predominantly punk label Epitaph Records.

Yvonne and Mavis Staples gave one of their father's, "Pops" Staples, guitars to Marty Stuart after Staples' death.[4]

Each episode features music by Stuart and his band the Fabulous Superlatives, as well as his wife, Grand Ole Opry star Connie Smith, banjo-picker Leroy Troy, and guests. The show is sponsored by Mississippi Tourism.

Stuart has written articles and published photos of Country singers for various magazines.

Stuart has been married to country artist Connie Smith since July 8, 1997. Stuart was formerly married to Cindy Cash, a daughter of Johnny Cash. He maintains that he avoided singing early in his career until it became unavoidable. An accomplished lead singer, Marty also excels at background vocals and harmony, particularly in his gospel offerings.