St. Antonio Primaldo and his companion martyrs (Italian: I Santi Antonio Primaldo e compagni martiri), also known as the Martyrs of Otranto, were 813 inhabitants of the Salentine city of Otranto in southern Italy who were killed on August 14, 1480. The mass execution is often explained as taking place after the Otrantins refused to convert to Islam when the city fell to an Ottoman force under Gedik Ahmed Pasha.

The Ottoman ambitions in Italy were ended. Had Otranto surrendered to the Turks, the history of Italy might have been very different. But the heroism of the people of Otranto was more than a strategically decisive stand. What made the sacrifice of Otranto so remarkable was the willingness to die for the faith rather than reject Christ.Matthew Bunson

The siege of Otranto -with the martyrdom of the inhabitants- was the last significant military attempt by a Muslim force to conquer southern Italy. The slaughter was remembered by Risorgimento historians (like Arnaldi and Scirocco) as a milestone in European history,[1] because even due to this sacrifice the Italian peninsula was never conquered by Muslim troops like happened with the Iberian and Balkan peninsulas.[2]

The contemporary Turkish historian Ibn Kemal indeed justified the slaughter on religious grounds. One modern study suggests it may have been a punitive measure, devoid of religious motivations, exacted to punish the local population for the stiff resistance they put up, which delayed the Turkish advance and enabled the King of Naples to strengthen local fortifications. Intimidation, a warning to other populations not to resist, may also have entered the invaders' calculations.[3] They were beatified in 1771 and were canonised by Pope Francis on 12 May 2013.[4] They are the patron saints of the city of Otranto and the Archdiocese of Otranto.

On 28 July 1480 an Ottoman force commanded by Gedik Ahmed Pasha, consisting of 90 galleys, 40 galiots and other ships carrying a total of around 150 crew and 18,000 troops, landed beneath the walls of Otranto. The city strongly resisted the Ottoman assaults, but the garrison was unable to resist the bombardment for long. The garrison and all the townsfolk thus abandoned the main part of the city on 29 July, retreating into the citadel whilst the Ottomans began bombarding the neighboring houses.

According to an accounts of the story chronicled by Giovanni Laggetto and Saverio de Marco (and presented by author Ted Byfield) the Turks promised clemency if the city capitulated but were informed that Otranto would never surrender. A second Turkish messenger sent to repeat the offer "was slain with arrows and an Otranto guardsman flung the keys of the city into the sea."[5] At this the Ottoman artillery resumed the bombardment.

A messenger was dispatched to see if King Ferdinand of Naples could send assistance. As time went on "Nearly seven-eights of Otranto's militia slipped over the city walls and fled."[5] The remaining fifty soldiers fought alongside the citizenry dumping boiling oil and water on Turks trying to scale the ramparts between the cannonades.[5]

On 11 August, after a 15-day siege, Gedik Ahmed ordered the final assault, which broke through the defenses and captured the citadel. When the walls were breached the Turks began fighting their way through the town. upon reaching the cathedral "they found Archbishop Stefano Agricolo [ Stefano Pendinelli ], fully vested and crucifix in hand" awaiting them with Count Francesco Largo. "The archbishop was beheaded before the altar, his companions were sawn in half, and their accompanying priests were all murdered." After desecrating the Cathedral, they gathered the women and older children to be sold into Albanian slavery. Men over fifteen years old, small children, and infants, were slain.[5]

According to some historical accounts, a total of 12,000 were killed and 5,000 enslaved, including victims from the territories of the Salentine peninsula around the city.[6] 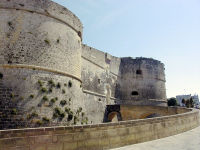 Eight hundred able-bodied men were told to convert to Islam or be slain. A tailor named Antonio Primaldi is said to have proclaimed "Now it is time for us to fight to save our souls for the Lord. And since he died on the cross for us, it is fitting that we should die for him."[5] To which those captives with him gave a loud cheer.

On August 14 they were led to the Hill of Minerva (later renamed the Hill of Martyrs). There they were to be executed with Primaldi to be beheaded first. After the blade decapitated him "his body allegedly remaining stubbornly and astonishing upright on its feet. Not until all had been decapitated could the aghast executioners force Primaldi's corpse to lie prone."[5] Witnessing this, one Muslim executioner (whom the chroniclers say was an Ottoman officer called Bersabei) is said to have converted on the spot and been impaled immediately by his fellows for doing so.

Between August and September 1480, King Ferdinand of Naples, with the help of his cousin Ferdinand the Catholic and the Kingdom of Sicily, tried unsuccessfully to recapture Otranto.[7] Seeing the Turks as a threat to his home Alfonso of Aragon left his battles with the Florentines to led a campaign to liberate Otranto from the Ottoman invaders beginning in August 1480.[8] The city was finally retaken in the spring of 1481 by Alfonso's troops supported by King Matthias Corvinus of Hungary's forces. The skulls of the martyrs were placed in a reliquary in the city's cathedral.[5]

On 13 October 1481 the bodies of the Otrantines were found to be uncorrupted[citation needed] and were translated to the city's cathedral. From 1485, some of the martyrs' remains were transferred to Naples and placed under the altar of Our Lady of the Rosary in the church of Santa Caterina a Formiello - that altar commemorated the final Christian victory over the Ottomans at Lepanto in 1571. They were later moved to the reliquary chapel, consecrated by Benedict XIII, then to a site under the altar where they are now sited. A recognitio canonica between 2002 and 2003 confirmed their authenticity.

In 1930 Monsignor Cornelio Sebastiano Cuccarollo O.F.M. was made archbishop of Otranto, and as a sign of affection and recognition to his old diocese he gave some of the relics to the Sanctuary of Santa Maria di Valleverde in Bovina, where he had been bishop from 1923 to 1930, where they are now in the crypt of the new basilica. Other relics of the martyrs are venerated in several locations in Apulia, particularly in Salento, and also in Naples, Venice and Spain.

A canonical process began in 1539 and ended on 14 December 1771, when Pope Clement XIV beatified the 800 killed on the Colle della Minerva and authorised their cult - since then they have been the protectors of Otranto.

In view of their possible canonisation, at the request of the archdiocese of Otranto, the process was recently resumed and confirmed in full the previous process. On 6 July 2007, Pope Benedict XVI issued a decree recognising that Primaldo and his fellow townsfolk were killed "out of hatred for their faith".[9] On 20 December 2012 Benedict gave a private audience to cardinal Angelo Amato, S.D.B., prefect of the Congregation for the Causes of Saints, in which he authorised the Congregation to promulgate a decree regarding the miracle of the healing of sister Francesca Levote, attributed to the intercession of the Blessed Antonio Primaldo and his Companions.[10]

The martyrs were canonized on 12 May 2013 by Pope Francis. The announcement of the canonisation was made on 11 February 2013 by Pope Benedict XVI in the consistory in which Benedict also announced in Latin his intention to resign the papacy.

Due to embellishment of accounts of the battle over the generations, modern historians (such as Bisaha and Tateo) question the account that the inhabitants were given the option of converting to Islam to save themselves from execution. As author Nancy Bisaha points out, "historians have begun to question the veracity of these tales of mass slaughter and martyrdom. Francesco Tateo argues that the earliest contemporary sources do not support the story of the eight hundred martyrs; such tales of religious persecution and conscious self-sacrifice for the Christian faith appeared only two or more decades following the siege.

However Italian historians (like Paolo Ricciardi and Salvatore Panareo) pinpointed that in the first year after the martyrdom there were no information about the massacres in the contemporaneous Christian world and only later -when Otranto was reconquered by the Neapolitans- it was possible to get details of the massacre from the local survivors who saw it.[11]

The earliest and most reliable sources describe the execution of eight hundred to one thousand soldiers or citizens and the local bishop, but none mention a conversion as a condition of clemency. Even more telling, neither a contemporary Turkish chronicle nor Italian diplomatic reports mention martyrdom. One would imagine that if such a report were circulating, humanists and preachers would have seized on it. It seems likely that more inhabitants of Otranto were taken out of Italy and sold into slavery than were slaughtered."[12]