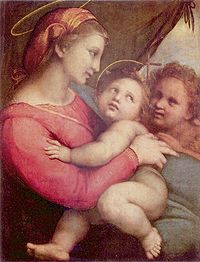 Madonna by Raphael, an example of Marian art

Mary, Mother of Grace is a Roman Catholic prayer to the Blessed Virgin Mary.

Mary,
Mother of grace,
Mother of mercy,
Shield me from the enemy
And receive me at the hour of my death.
Amen.

(From the Roman ritual)

This prayer is a fragment from within the DEVOTION IN MEMORY OF THE AGONY OF JESUS found in Section VI of the Raccolta.[1] It was originally declared by Pope Pius VII as part of a Rescript dated August 26, 1814, issued through the Cardinal-Prefect of the Sacred Congregation of Rites. Pope Pius gave his approbation to the devotion in memory of the Agony of our Lord and Saviour Jesus Christ; granting at the same time an indulgence to all the faithful every time they devoutly say the complete Devotion. Since the "Mary, Mother of Grace" prayer is only a partial recitation of the Devotion, only a partial indulgence is granted the prayer.

The title, "Mary, Mother of Grace" is actually a misnomer. In the text of the Racollta containing the prayer, the title reads: "Prayer to the Holy Virgin, Mother of Sorrows"

The entire section within which the fragment originates from the overall Devotion reads:

PRAYER TO THE HOLY VIRGIN, MOTHER OF SORROWS.

Most Holy Mother of sorrows, by that intense martyrdom which thou didst suffer at the foot of the cross during the three hours of the agony of Jesus; deign to aid us all, who are the children of thy sorrows, in our last agony, that by thy prayers we may pass from our bed of death to adorn thy crown in Paradise.
[Three Ave Maria's]