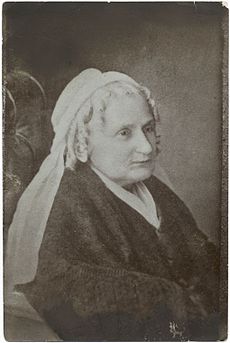 Mary Anna Randolph Custis Lee (October 1, 1808 – November 5, 1873) was a third cousin and the wife of Robert E. Lee, the prominent career military officer who subsequently commanded the Confederate Army of Northern Virginia during the American Civil War.[1] They married at her parents' home, Arlington House, in Virginia in 1831, and had seven children together; she survived him by three years. 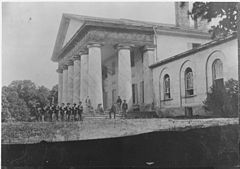 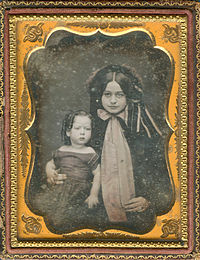 Lee was descended from several colonial and Southern families, including the Parke Custises, Fitzhughs, Dandriges, Randolphs, Rolfes, and Gerards. Through her paternal grandmother, Eleanor Calvert, she descended from Lord Baltimore. Through her mother, Mary Lee Fitzhugh Custis, she was a descendant of William Fitzhugh.[2] Mary Anna Custis Lee was the only surviving child of George Washington Parke Custis, George Washington's step-grandson and adopted son and founder of Arlington House, and Mary Lee Fitzhugh Custis, daughter of William Fitzhugh[3] and Ann Bolling Randolph Fitzhugh. Her godmother, Mary Randolph, the first person recorded buried at Arlington, wrote an early book on housekeeping and cooking. Lee's birth year is usually given as 1808, but it appears in the Custis family Bible and in records kept by her mother as 1807, and is also referred to in a letter her mother wrote in the autumn of 1807. She was born at Annefield in Clarke County, Virginia when her mother's coach stopped there during a journey.[4] She was well educated, having learned both Latin and Greek.

She enjoyed discussing politics with her father, and later with her husband. She kept current with the new literature. After her father's death, she edited and published his writings as Recollections and Private Memoirs of Washington, by his Adopted Son George Washington Parke Custis, with a Memoir of this Author by his Daughter[5] in 1859.

Lee was diminutive and vivacious. She had known her third cousin, Robert E. Lee, from childhood; her mother and Robert's mother were second cousins, and Lee's father Henry had delivered the eulogy to a crowd of 4000 at George Washington's 1799 funeral.[6] Among Mary Anna's other suitors was Sam Houston. 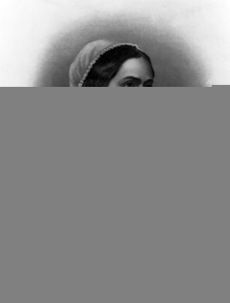 Lee inherited Arlington House from her father after he died in 1857. The estate had long been the couple's home whenever they were in the area during her husband's military career. She was a gracious hostess and enjoyed frequent visitors. She was a painter, like her father, and painted many landscapes, some of which are still on view at the house. She loved roses and grew 11 varieties.

Deeply religious, Lee attended Episcopal services when there was one near the army post. From Arlington, Virginia, the Lees attended Christ Church (Alexandria, Virginia) in Alexandria, which she and Robert had both attended in childhood.[7]

Lee taught her female slaves to read and write and was an advocate of eventual emancipation. She did not free her slaves, but could have under state law of the time. She suffered from rheumatoid arthritis, which became increasingly debilitating with advancing age. By 1861, she was using a wheelchair.

With the advent of the American Civil War, Robert and their sons were called to service in Virginia. Mary Custis Lee delayed evacuating Arlington House until May 15, 1861. Early that month, Robert wrote to his wife saying:

War is inevitable, and there is no telling when it will burst around you . . . You have to move and make arrangements to go to some point of safety which you must select. The Mount Vernon plate and pictures ought to be secured. Keep quiet while you remain, and in your preparations . . . May God keep and preserve you and have mercy on all our people.[8]

Lee and her daughters initially moved among the several family plantations. In May 1862, she was caught at her son Rooney's White House Plantation in New Kent County behind the Federal lines, as Union forces moved up the York and the Pamunkey rivers toward Richmond. The Union commander, George B. McClellan, allowed her passage through the lines in order to take up residence in Richmond—the city which was also McClellan's campaign goal.

Lee and her daughters settled at 707 East Franklin Street in Richmond for a time. The family next moved to the plantation estate of the Cocke family at Bremo Bluff, where they sought refuge until after the end of the war in November 1865.[9][10]

After the war, the Lees lived in Powhatan County for a short time before moving to Lexington. There Robert E Lee became president of the Washington College, later renamed Washington and Lee University. Mary Custis Lee visited her beloved Arlington House once more before her death, but was unable to leave her horse carriage. She hardly recognized the estate except for a few old oaks and some of the trees she and Robert had planted.

Mary Anna Custis Lee died at the age of 66, surviving her husband by three years. She is buried next to him in the Lee family crypt at Lee Chapel on the campus of Washington and Lee.