Mary Anne Trump (née MacLeod, Scottish Gaelic: Màiri Anna NicLeòid; May 10, 1912 – August 7, 2000) was the mother of Donald Trump, the 45th president of the United States, and the wife of real estate developer Fred Trump. Born in the Outer Hebrides of Scotland, she migrated to the United States in 1930 and became a naturalized citizen in 1942.[3] She raised five children with her husband and engaged in philanthropic activities in the New York area.[4]

Mary Anne MacLeod was born in a pebbledash croft house owned by her father since 1895 in Tong on the Isle of Lewis.[2] Local historians and genealogists have described properties in this community at the time as "indescribably filthy" and characterized by "human wretchedness".[5][6] The outbreak of World War I weakened its economy and male population.[2]

Raised in a Scottish Gaelic-speaking household, Mary was the youngest of ten children born to Malcolm MacLeod (1866–1954) and Mary MacLeod (née Smith; 1867–1963).[7] Her father was a crofter, fisherman and compulsory officer at Mary's school.[2][3][8][9] English was her second language, which she learned at the school she attended until eighth grade.[2]

Immigration to the United States

With several sisters having already established themselves there,[9] Mary Anne MacLeod may have first visited the United States for a short stay in December 1929. She was issued immigration visa number 26698 at Glasgow on February 17, 1930.[8] On May 2, MacLeod departed Glasgow on board the RMS Transylvania arriving in New York City on May 11 (one day after her 18th birthday). She declared she intended to become a U.S. citizen and would be staying permanently in America.[3][8][9] In doing so she became what would later be termed an economic migrant, one of tens of thousands of young Scots who left for the United States or Canada during this period, Scotland having suffered badly the consequences of the Clearances and World War I.[10][11] The alien passenger list of the Transylvania lists her occupation as a domestic worker.[2][12]

Arriving in the U.S. with $50 (equivalent to $708 in 2019), MacLeod lived with her older sister Christina Matheson on Long Island and worked as a domestic servant for at least four years.[3][8][9] One of these jobs appears to have been as a nanny for a well-to-do family in a New York suburb, but the position was eliminated due to economic difficulties caused by the Great Depression.[10] As one account has put it, she "started life in America as a dirt-poor servant escaping the even worse poverty of her native land."[8] Having obtained a U.S. Re-entry Permit—only granted to immigrants intending to stay and gain citizenship[8][9]—she returned to Scotland on the SS Cameronia on September 12, 1934.[13] She was recorded as living in New York by April 1935 in the 1940 U.S. Census.[13] In 1936, she married Fred Trump in New York City.[9]

Though the 1940 census form filed by Mary Anne and Fred Trump stated that she was a naturalized citizen, she did not actually become one until March 10, 1942.[3][8][9] However, there is no evidence that she violated any immigration laws prior to her naturalization, as she frequently traveled internationally and was afterwards able to re-enter the U.S.[14] MacLeod returned to her home area in Scotland often during the course of her life and spoke Gaelic when she did.[10]

In the early 1930s, MacLeod is reported to have met Fred Trump at a dance.[3] They married at the Madison Avenue Presbyterian Church in January 1936, with George Arthur Buttrick officiating.[9] The wedding reception for 25 guests was held at the Carlyle Hotel in Manhattan. On April 5, 1937, she gave birth to their first child, Maryanne Trump Barry, followed by Frederick Christ Trump Jr. (1938–1981), Elizabeth Trump Grau (born 1942), Donald Trump (born 1946), and Robert Trump (born 1948).[3][8][9] The final birth led to an emergency hysterectomy, which she barely survived.[2] 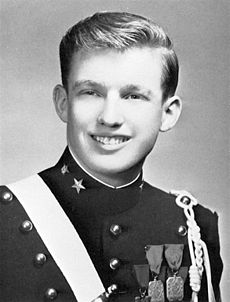 The family lived in Jamaica, Queens and later specifically in Jamaica Estates.[4][3] At first they lived in her mother-in-law's house.[15] The couple was upwardly mobile and by 1940 she had taken on a Scottish domestic of her own.[16] She was generally a housewife but sometimes helped with her husband's real estate business, such as collecting coins from laundry machines in family-owned apartment buildings. She drove a Rolls Royce that bore the vanity plates "MMT".[2]

She also acted as a volunteer in a hospital and was involved in school activities and charities.[2] Those causes included betterment of those with cerebral palsy and efforts to improve the lives of intellectually disabled adults.[3] The Trumps were active in the Salvation Army, the Boy Scouts of America, and the Lighthouse for the Blind, among other charities.[4] She had a significant role at the Women's Auxiliary of Jamaica Hospital and likewise at the Jamaica Day Nursery.[4] She and her husband donated time, effort, services, and several buildings of the medical nature around New York.[4][17] Moreover, a 228-bed nursing home pavilion at Jamaica Hospital Medical Center, where she spent years volunteering, is named solely for her.[17] She also belonged to several social clubs.[2][3]

As a parent she was more reserved than her husband.[2] Friends of the children noted fewer interactions with her than with him.[2] In appearance she was slight of build but was noted for an elaborate hairstyle, labeled in one account a "dynamic orange swirl".[3] This bore a commonality with her son Donald, who once wrote, "Looking back, I realize now that I got some of my sense of showmanship from my mother."[3]

As she grew older she suffered from severe osteoporosis.[2] On October 31, 1991, she was mugged while shopping on Union Turnpike near her home. She was thrown onto a sidewalk after her purse with $14 in it was taken.[18] She sustained broken ribs, facial bruises, several fractures, a brain hemorrhage, and permanent damage to her sight and hearing.[19][20] A black delivery truck driver named Lawrence Herbert[21] apprehended her 16-year-old assailant, Paul LoCasto,[22] for which he was later rewarded by Donald Trump with a check that kept him from losing his home to foreclosure.[23][9]

Mary Anne's husband Fred Trump died at age 93 in June 1999.[3][8][9] She died a year later on August 7, 2000 at Long Island Jewish Medical Center in New Hyde Park, New York, at age 88.[4] Services were held at Marble Collegiate Church in Manhattan[18] and she was buried alongside her husband and son (Fred Jr.) at Lutheran All Faiths Cemetery in Middle Village, Queens.[24] The death notice in her Scottish hometown newspaper, the Stornoway Gazette, read: "Peacefully in New York on August 7, Mary Ann [sic] Trump, aged 88 years. Daughter of the late Malcolm and Mary MacLeod, 5 Tong. Much missed."[9]