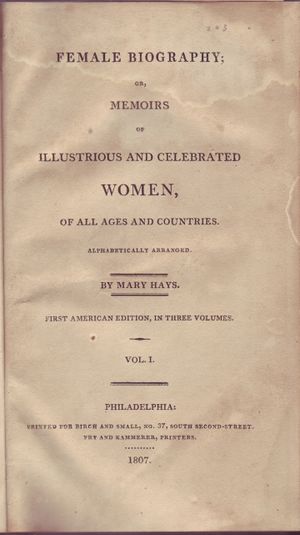 Mary Hays (1759–1843) was an autodidact intellectual who published essays, poetry, novels, and several works on famous (and infamous) women. She is remembered for her early feminism, and her close relations to dissenting and radical thinkers of her time including Robert Robinson, Mary Wollstonecraft, William Godwin, and William Frend. [1] She was born in 1759, into a family of Protestant dissenters who rejected the practices of the Church of England (the established church). Hays was described by those who disliked her as 'the baldest disciple of [Mary] Wollstonecraft' by The Anti Jacobin Magazine, attacked as an 'unsex'd female' by clergyman Robert Polwhele, and provoked controversy through her long life with her rebellious writings. When Hays's fiancé John Eccles died on the eve of their marriage, Hays expected to die of grief herself. But this apparent tragedy meant that she escaped an ordinary future as wife and mother, remaining unmarried. She seized the chance to make a career for herself in the larger world as a writer.[1]

Hays was influenced by Mary Wollstonecraft's A Vindication of the Rights of Woman, and after writing admiringly to her, the two women became friends. The backlash following Wollstonecraft's death and posthumous publication of her Memoirs impacted Hays' later work, which some scholars have called more conservative.[2] Among these later productions is the six-volume compendium Female Biography: or Memoirs of Illustrious and Celebrated Women of All Ages and Countries, in which Wollstonecraft is not mentioned, although Hays had written an extensive obituary for The Annual Necrology shortly after Godwin's controversial Memoirs. If Wollstonecraft was neglected through the nineteenth century, Hays and her writing received even less critical evaluation or academic attention until the twentieth-century's emerging feminist movement.

Mary Hays was born in London 13 October 1759, the daughter of Rational Dissenters John and Elizabeth Hays.

In 1777 she met and fell in love with John Eccles. Their parents initially opposed the match but they met secretly and exchanged over 100 letters.[3] The two were eventually engaged, but in August 1780, Eccles died of a fever. Hays wrote: "All my pleasures – and every opening prospect are buried with him".[4] This spurred her to take up writing. For the next ten years she wrote essays and poems. A short story, "Hermit: an Oriental Tale," was published in 1786 in Universal Magazine. It was a picturesque tale that warned against feeling too much passion. She exchanged letters with Robert Robinson, a minister who campaigned against the slave trade. She attended the dissenting academy in Hackney in the late 1780s.

In 1791 she replied to Gilbert Wakefield's critique of communal worship with a pamphlet called Cursory Remarks on An Enquiry into the Expediency and Propriety of Public or Social Worship, using the nom-de-plume Eusebia.[5] The Cambridge mathematician William Frend wrote to her enthusiastically about it. This blossomed into a brief romance.

In 1792 Hays was given a copy of A Vindication of the Rights of Woman by Mary Wollstonecraft, and it made a deep impression on her.[1] Hays contacted the publisher of the book, Joseph Johnson, which led to her friendship with Wollstonecraft and involvement with London's Jacobin intellectual circle. Hays next wrote a book Letters and Essays (1793) and invited Mary Wollstonecraft to comment on it before publication. Although the reviews were mixed Hays decided to leave home and to try to support herself by writing. She moved to Hatton Garden. She did not have enough money to buy Enquiry Concerning Political Justice by William Godwin. Boldly she wrote to the author and asked to borrow it. This turned into a friendship, in which Godwin became a guide and teacher. She acted on Wollstonecraft's demand that women take charge of their lives and moved out of her mother's home to live as an independent woman in London. This was an extraordinary and unaccustomed act for a single woman in Hays's time: Hays’s mother was horrified, and Hays’s friends condemned her. Although Hays’s family were outsiders from mainstream British culture, Hays’s mother still disapproved of her daughter’s social rebellion.[1]

Her next work, Memoirs of Emma Courtney (1796) is probably her best-known work. Hays experimented with 'the idea of being free', earning her own living and actively pursuing the man she loved, a handsome Cambridge University mathematician, William Frend. However, while he supported her career, Frend rejected Hays's romantic feelings towards him. Hays used her romantic heartbreak as the subject of her best-selling novel, Memoirs of Emma Courtney, published in 1796. Readers were shocked because Hays included real letters she had exchanged with William Godwin, leading radical philosopher, and Frend. Emma, Hays's 'fictional' heroine, tells the Frend figure that her desire for him trumps every other consideration: reputation, status, and even chastity. In the most notorious statement in the book, Emma plays on Frend’s name: ‘My friend’, she cries, ‘I would give myself to you – the gift is not worthless’.[1] In real life and in the novel Frend rejected Hays. Hays's disgrace was juicy gossip in the close-knit group of London publishing. Then Scottish writer Elizabeth Hamilton published Memoirs of Modern Philosophers (1800), a novel that satirised Hays as a sex hungry man-chaser, and Hays became a laughingstock throughout Britain.

The novel draws on love letters to William Frend (who was ultimately unreceptive) and includes material taken also from her more philosophical letters in which she debated with William Godwin. The heroine falls in love with Augustus Harley, who is the son of a dear friend, but lacking an income. Recognizing that he cannot afford marriage, she offers to live with him as his wife without getting married. She is rejected and then turns to Mr Francis, a character based on Godwin. They exchange philosophical letters, but in the end he advises her against becoming too emotional. The critical response to the novel was divided along political lines. Hays was attacked for writing a shocking, unfeminine book that advocated for ignoring socially sanctioned marriage, but also praised for developing in great detail the emotional life of an intellectual woman and displaying some dangers of unfettered sensibility.

Hays and Godwin fell out, and she turned her attention to other writers, including Robert Southey and unfortunately Charles Lloyd. There is no known portrait of her in later life, but Samuel Taylor Coleridge referred to her as "a thing ugly and petticoated" (although his real complaint was her arguing theology with him). Her next novel The Victim of Prejudice (1799) is more emphatically feminist in its focus on women's secondary status and criticism of class hierarchies. Hays was considered too radical and her book did not sell well. In 1803 Hays demonstrated her continuing concern with women's lives and work, publishing Female Biography, a book in six volumes, containing the lives of 294 women from ancient figures to near contemporaries. Some scholars have argued that by this stage Hays realised that it was dangerous to praise Mary Wollstonecraft, and so omitted her from the book. Others have argued that Hays had little to lose and did not include Wollstonecraft for other reasons--her stated reason that she was too recently dead, and because she had already written and published a full obituary that should perhaps be considered part of Female Biography.

Mary Hays is memorialised in the Heritage Floor of Judy Chicago's The Dinner Party, near the place setting for Mary Wollstonecraft.[6] Her letters are held at the New York Public Library, Astor and Tilden Foundation thanks to the work of Dr. Gina Luria Walker.

All by Mary Hays; dates are for first editions.